A new study has found that 46% of UK mothers said a lack of childcare played a role in their redundancy. Almost half of pregnant women said they were suspended on "incorrect terms." 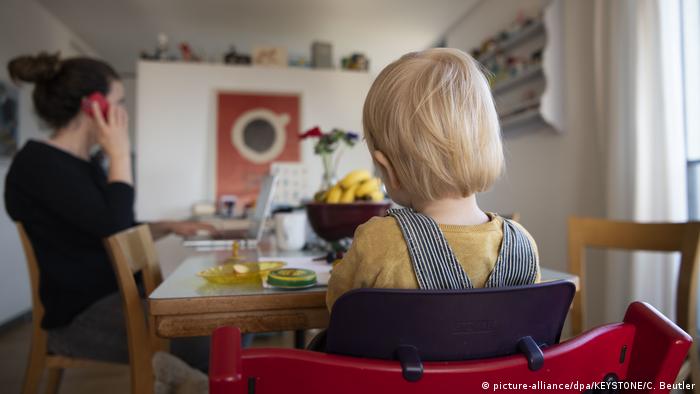 Almost three-quarters of mothers in the UK have been forced to reduce work hours because of a lack of childcare provision during the COVID-19 pandemic, according to a new study carried out by a maternal rights group.

The UK-based Pregnant Then Screwed charity on Friday released the results of a survey of 19,950 mothers and pregnant women to warn about the true impact of childcare closures during the pandemic on women.

The data revealed that 15% of mothers either have been made redundant or expect to be made redundant and of those, 46% said that a lack of childcare provision played a role in their redundancy.

Meanwhile, 72% had to cut back on work hours because of childcare issues, and 65% of mothers who have been furloughed said a lack of childcare was the reason.

Of the employed mothers surveyed, 81% said they need childcare to be able to work, but 51% did not have available childcare options to enable them to return to work.

Across the UK, schools and nurseries were ordered to close under lockdown, leaving many families struggling to balance work with childcare .

The UK government classifies pregnant women as  'clinically vulnerable.' However, the survey found that 45% of pregnant employees that are working outside of the home have not had an individual risk assessment conducted, increasing to 52% for ethnic minority women.

A further 46% of these pregnant women do not feel safe from COVID-19 when they are at work, increasing to 59% for ethnic minority women.

"Your employer must provide pregnant women with a detailed risk assessment to show how they will keep you safe…If they can't do this then they must allow you to work from home and where that's not possible they should suspend you on full pay," said Brearley.

The study also found that 74% self-employed mothers have had their earning potential reduced because of a lack of access to childcare and 44% had to give up their childcare space during the crisis — up from 33% for employed mothers.

"Women who have taken maternity leave in the last three years are seeing their government support cut by a third or even two-thirds if they have had two maternity leaves, compared to dads who are not impacted financially by maternity leave," said Brearley, adding that women's earning potential is reducing by the week amid the pandemic.

Studies around the world have found women are assuming more childcare and housework during the health crisis.

The International Labour Organization warned that the coronavirus could wipe out "the modest progress" made on gender equality in the workforce in recent decades, and that women globally are at increased risk of losing their jobs.

"This is discrimination in its purest sense … To make someone redundant not because of their ability but because they are a mother needs to stop," said Brearley.

The UK Department for Education said it was working to ensure nurseries and childcare providers stay afloat as they gradually re-open by "block-buying" childcare places until the end of the year.