Could legalizing rhino horn save the species? | Environment | All topics from climate change to conservation | DW | 23.12.2014

Could legalizing rhino horn save the species?

Rhino poaching has dramatically increased over the last decade. How can the animals be saved from extinction? Some propose legalizing the rhinoceros horn trade. But to others, this seems unrealistic. 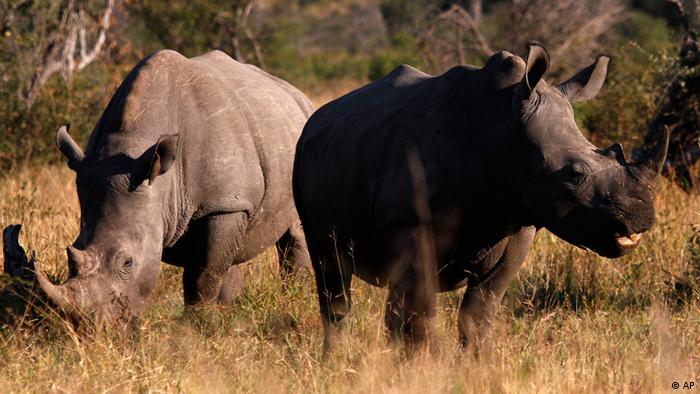 Rhino poaching numbers in South Africa have increased exponentially over the last decade: In 2004, 10 rhinos were killed, while 2014 set a sad record with more than 1,100 rhinos being poached.

With South Africa as the home to around 90 percent of the world's white rhino population, what happens here might decide the future of the species. Now, South Africa is mulling legalizing the trade in rhinoceros horns.

The 'war on poaching'

Rhinos are poached because of their horn's value: In Asia, many people believe that it cures ailments, from nosebleeds to cancer. Rhino horn on the black market is worth up to $100,000 a kilogram - rivaling the price of gold or cocaine.

A rhino horn has a structure similar to human hair or fingernails. Research has proven that the horn has no medicinal effect - but the superstition persists. 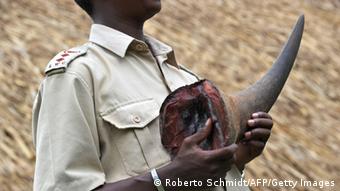 But areas where rhino poaching takes place are simply too big: Kruger National Park for example - which is home to half of the country's rhinos - is the size of Israel, which makes it difficult and expensive to monitor.

Other initiatives focus on stopping the problem at its root: in Asia. "Reeducation programs" are to raise awareness amongst citizens especially in China and Vietnam, that rhino horn is useless as a medicine, and highly unsustainable.

But despite these efforts, the rhino poaching crisis is not getting under control.

Reeducation will not be enough to stop the poaching in time, says South African conservationist economist Michael't Sas-Rolfes. Instead, he proposes legalizing the trade.

"The rationale is to bring the price down to a manageable level through constant, legal supply." A lower price, he argues, would provide less incentive for poachers to kill the rhinos. Right now, the poaching business is too profitable for poachers to stop.

Another benefit of legalizing the trade would be the income that is created, which in turn could be used to protect the rhinos, says Sas-Rolfes. "It has become expensive to protect rhinos, and conservation organizations simply don't have sufficient funds to invest in the level of field protection that is needed to sustain the number of rhinos we have," he said.

Legalizing the trade would provide a legal, market solution that could work, Sas-Rolfes thinks.

Doesn't happen in a day 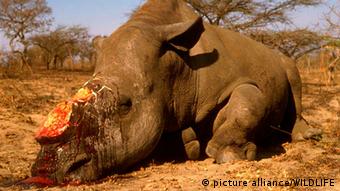 A white rhino killed by poachers for its horn

There are different scenarios for how the trade could be legalized. One option would be to sell of the existing stockpiles of rhino horn that has been confiscated over the years. South Africa currently sits on 18 tons of rhino horn, worth $100 million.

Another option would be to allow the selling of "harvested" horns: The horn of the rhino can be cut off or "harvested" without hurting the rhino, says Sas-Rolfes.

"It's essentially like a haircut, if you don't cut it too close to the nerve ending." The horn regrows within about three years, so they could be harvested regularly. According to Sas-Rolfes, there are already private rhino owners who regularly take the rhinos horns off, without seeing health and breeding rates affected.

But any legalization of the trade won't happen fast. The body that decides on such trade is CITES, or the Convention on International Trade of Endangered Species - which has 180 member states. It banned international trade of rhino horn in 1977.

David Morgan, head of the CITES scientific unit, explains: "If there is to be any change in the existing situation, that has to be proposed by one of the member country of CITES at the next conference of parties in 2016.

And in order for any proposal to pass, it needs two-thirds of the present countries' votes. This can only happen if the South African CITES delegates can put forward a convincing proposal - which is by no means a sure thing. 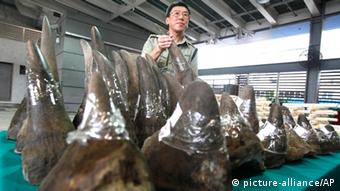 The suggestion to legalize the trade in rhino horn is a polarizing one. Dex Kotze, a conservationist and fundraiser for the non-governmental organization Stoprhinopoaching, argues that it won't work.

"A big problem is that demand will far outstrip the supply of rhino horn." He estimates that the government could sell 3.6 tons of "harvested" rhino horn a year - much less than his estimate of demand at almost 4,000 tons.

Kotze also points out the problem of corruption in China, and South Africa. "We are afraid that the money would be going into the wrong pockets." He also fears that even if legalization could be implemented, the time for rhinos would run out before this can happen.

With legal processes still up in the air, conservationists agree that action must happen on the ground, regardless of potential legalization.

"You also still need very strict protection, and you have to have laws in place that prohibit any illegal trade," says Sas-Rolfes.

Kotze adds: "It’s a political problem. Countries need to show more political will and leaders have to enforce that. And CITES as a body needs to flex its muscles, and start applying sanctions to the countries."

Kruger National Park is home to the world's largest rhino population but it's also a hotspot for poachers. Park officials plan to sell some off Kruger's rhinos to game reserves. (24.11.2014)

More rhinos were killed by poachers last year in Africa than ever before. In 2014 the dubious record looks set to be broken again. The black market price for rhino horn is now considerably higher than cocaine. (21.07.2014)

Curbing the demand for exotic animals

Vietnam’s growing affluent classes have developed a taste for rare and hugely expensive wildlife species and products. Conservation groups are trying to change that in a bid to save the country’s shrinking biodiversity. (10.06.2014)

Poachers kill at least one rhino a day in South Africa. Their horns are in huge demand on the black market, and are worth more than gold.

The Kruger National Park in South Africa is where most of the country's rhino are being slaughtered. Authorities are battling to protect the species from poaching gangs.