Could coronavirus win an election for South Korea′s president? | Asia| An in-depth look at news from across the continent | DW | 14.04.2020

Could coronavirus win an election for South Korea's president?

South Korea is holding a national election that has turned into a referendum on President Moon's successful coronavirus crisis management. The popularity of the once beleaguered politician has soared, just in time. 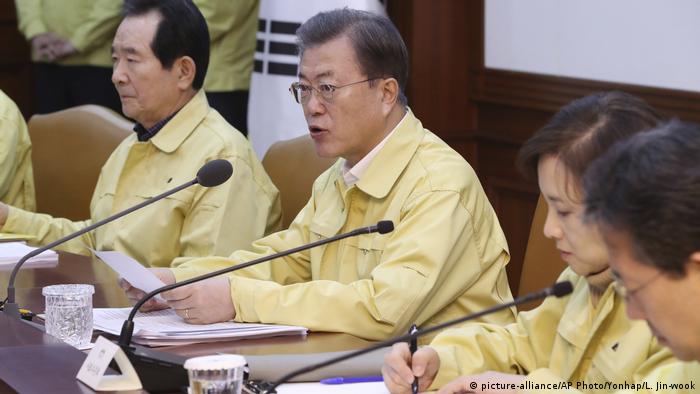 As South Korea heads to the polls on Wednesday, President Moon Jae-in has engineered a political reversal, using his management of the coronavirus crisis to rally public support.

In January, when the coronavirus broke out in South Korea, Moon's public approval rating was sagging. Dogged by criticism over economic and foreign policy initiatives, it looked like his Democratic Party would be defeated in the election.

But now, as the nation prepares to go to the polls, indications are that Moon's party, together with its allies, will once again emerge as the single largest political grouping in the 300-seat parliament.

The mandate should give Moon the power to forge ahead with a series of economic and social initiatives that were deeply controversial before the coronavirus struck.

Moon has his government's swift and successful response to the virus to thank for the reversal of political fortune.

Conservatives condemned the government for being too accommodating towards North Korea, a policy that has failed to reap any benefits as Pyongyang continues to develop long-range ballistic missiles and nuclear warheads.

The government's initial response to the coronavirus outbreak was also condemned as slow and unfocused and appeared to be the final nail in its coffin.

A poll released on January 16 showed support for Moon's party had fallen 4.1% to 37%, while the opposition Liberty Korea party was up in support hovering at 32%. A coalition of like-minded conservative parties would give Liberty a majority over the ruling party.

Those numbers have been largely reversed, with the Democrats coming in at 41% in the final poll before election day and Liberty Korea shrinking to just 23%.

"Even as we got into the early stages of the election campaigns in February, when the coronavirus was already a serious problem, the opposition parties said they did not want the elections to be postponed because they felt the situation was going to be to their advantage," said Park Saing-in, an economist at Seoul National University.

But that changed, he said, as Seoul introduced an aggressive testing policy, called on the public to follow social distancing recommendations, flooded COVID-19 hotspots with medical personnel, including from the armed forces, and imposed strict quarantine regulations.

It took a few weeks for the measures to gain traction, as critics accused the government of failing the nation — including for not closing the borders to arrivals from China early enough.

Rallying around the 'crisis' president

Now, Seoul is now being quizzed by foreign governments about how South Korea has largely overcome the virus. And it's response is seen as a success story.

"They have really turned it around and now we see the US and governments in Europe praising Seoul and that has completely changed the atmosphere," Park said, adding that Moon's party is predicted to have an edge over the opposition.

Leif-Eric Easley, an associate professor of international studies at Ewha Womans University in Seoul, said that coronavirus obscured other issues in the public eye.

"The ruling progressives were beset by scandal and disunity — typical ahead of legislative elections when the leader is in the latter part of a one-term presidency —but the invisible enemy of the coronavirus gave Moon Jae-in the opportunity to be a crisis president."

"COVID-19 so dominated the news before the election that many voters forgot about accusations of corruption and anti-democratic reforms, forgave the lack of progress on North Korea, and blamed South Korea's economic woes on the global pandemic rather than on the Moon administration’s policies," Easley told DW.

Voting during an epidemic

A number of problems linger in the run-up to election day. Voters have been told that they need to wear face masks and gloves to enter polling stations and that everyone will have their temperature taken.

Anyone who is running a fever will be told to use a separate booth away from the others.

Voters also seem to be confused about who to vote for, with a record number of parties contesting seats but restrictions on public gatherings meaning that politicians have not been able to conduct their traditional campaigns, which rely heavily on giving speeches in public places and shaking voters' hands.

With the coronavirus the main issue at stake, parties are trying to woo voters with their own emergency relief programs, many of which involve cash handouts to the public that have escalated as rivals sought to outbid each other.

"The incumbent often has a good chance to get the people to support him and, if he does not make the situation worse, to make his point," he said. "A crisis can be turned into an opportunity."

South Koreans keep their spirits up despite isolation