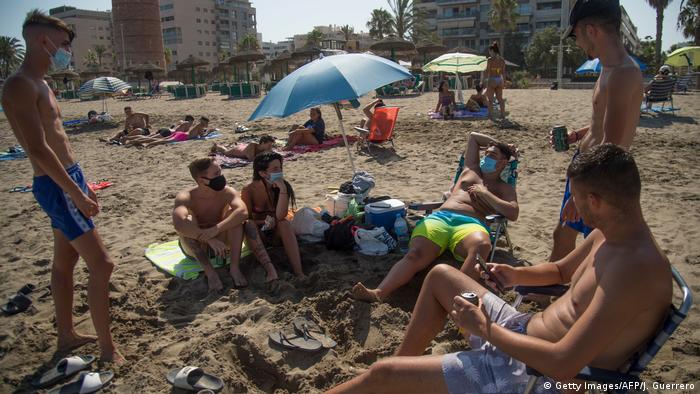 TUI, Europe's biggest holiday company, said on Sunday it was canceling all holidays from the UK to mainland Spain up to and including August 9 following updated travel advice by Britain imposing a 2-week quarantine on those returning from the Iberian country.

The Reuters news agency cited a spokesperson from the firm as saying that holidays booked to the Balearic Islands and Canary Islands would operate as usual.

The British government said on Saturday evening that it was removing Spain from its list of safe travel destinations due to a resurgence of coronavirus cases.

''Following a significant change over the last week in both the level and pace of change in confirmed cases, Spain has been removed from the list of countries where people do not have to self-isolate when arriving into the UK,'' the country's transport ministry said.

The government said the quarantine requirement would take effect from Sunday.

Read more: Where are we heading? Tourism after the coronavirus crisis

The decision means travelers returning from Spain to England, Scotland, Northern Ireland and Wales are required to self isolate for 14 days.

The rules will apply to those returning from mainland Spain as well as from the Canary and Balearic Islands.

The ministry has also advised against non-essential travel to Spain.

While UK Foreign Secretary Dominic Raab Raab defended the move as a "real-time response" to a sudden jump in cases in Spain, the opposition Labour Party's health policy chief, Jonathan Ashworth, slammed the government's "frankly shambolic" handling of the measure.

Despite TUI's decision to cancel its flights, EasyJet and British Airways said their scheduled services would run as normal.

Spain is currently facing fears of a second wave of infections; 900 new cases have been recorded daily in the past two days.

The decision is likely to have a deep impact on Spain's tourism industry. Last year, British holidaymakers made up 20% of all arrivals to Spain, higher than any other nation.

A spokesperson from the Spanish foreign ministry said that the country respected Britain's decision, while stating that Spain remains safe, with only localized, isolated and controlled outbreaks.

Britain's move followed Norway's decision on Friday to impose a 10-day quarantine on people arriving from Spain. France, too, has advised travelers not to visit Spain's north-eastern region of Catalonia.

Europe had reopened tourism just a few weeks ago, boosting the industry which had come to a standstill since the coronavirus outbreak. Spain, which had been badly affected by the pandemic, had started reopening its economy just over a month ago. The country has seen 28,000 deaths and more than 272,000 infections.

Britain has been the worst-affected nation in Europe, with more than 328,000 cases and more than 45,600 deaths.