Though tourism revenues have nearly disappeared, some locals are happy to have space back to enjoy their city, which for years has suffered from overtourism that is crowding out residents. 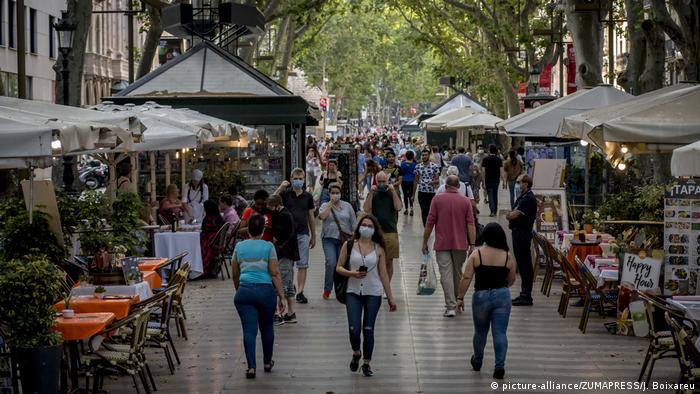 The Cruilla cultural festival is the first of its kind after the lockdown measures taken during the coronavirus pandemic, and will be, along with the Festival Grec, one of the few to take place in the city this year. Marina Rossell sings "Lili Marlen" in Catalan for the locals and recalls, with her songs of resistance and rescue, the recent months of difficulty staying home in isolation in Barcelona. 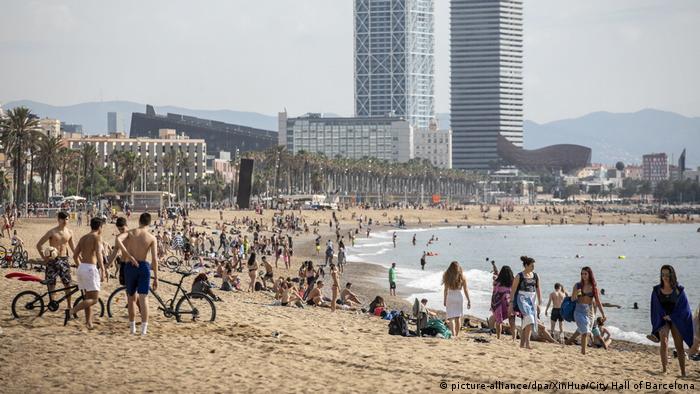 From March to May, as Spain battled high numbers of infections, a general lockdown was in place with only a few exceptions allowed for necessary errands. The fear of infection remains in everyone's bones. So far in the region of Catalonia, of which Barcelona is the capital, the deaths of nearly 13,000 people have thus far been attributed to COVID-19.

It explains why not only the tourists are staying away this year, but also why the city’s Gothic Quarter, where crowds usually move through the narrow streets, are largely shuttered. Only a third of the beach at the Olympic Port is occupied. Nobody knows exactly how this summer will pan out. In Barcelona and the surrounding area, the number of cases is currently rising again. There were over 800 new infections last weekend.

Since Monday a strict mask requirement has been in place in public spaces all across Catalonia and the Balearic Islands. Further measures to help contain the infection are to be expected. 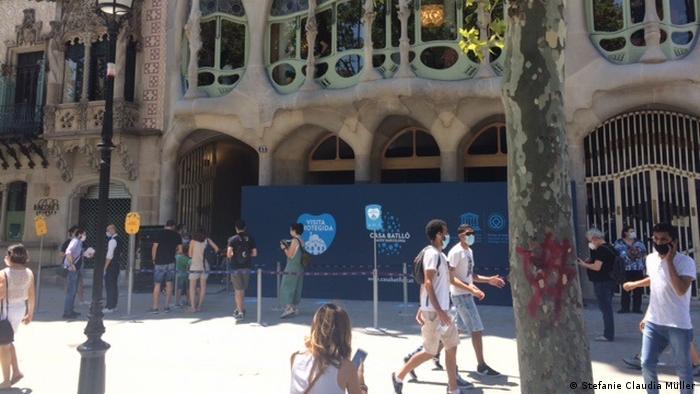 The number of visitors to the Museu Nacional d'Art de Catalunya in the Parc de Montjuic, which has so far only had 130,000 visitors, shows just how different this summer is. Last year at this time there had already been some 840,000.

For many cultural institutions, it is not worth opening — including the Liceu Opera House, which only starts its program at the end of September.

Garry Gautier, who heads the Casa Batllo, designed by the famed local architect Antoni Gaudi, therefore attaches great importance to the fact that the few visitors to the city’s otherwise most-visited museum in the city feel safe: "We have looked around the world for the best methods to use to protect them." Disinfection is carried out with an infrared system. The air is constantly exchanged, like in an airplane. It is a massive effort — one which calms some, but tends to deter others.

The Dutch tour guide Robbert Reurings knows this dilemma well. The father of two is almost in tears when he stands in front of Gaudi’s Sagrada Familia Cathedral with his e-bike: "No tourists can get in here yet — not before September." As a precaution, the 38-year-old asks the police when he can remove the mask. The official confirmed to him: "It can only come off when doing sports or eating, or while the beach." 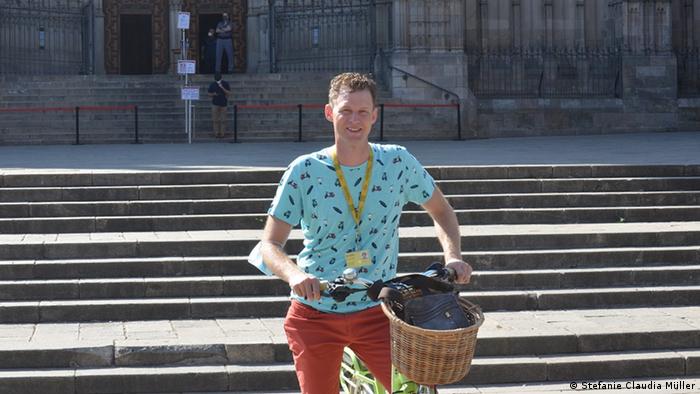 The only Dutch official tour guide in Barcelona, Robert Reurings, is hoping that tourism will pick up again in future

Those who do not stick to it face a fine of €100 ($114) — a possibility that deters quite a few people. Locals, even the young people, are avoiding contact with crowds.

In order to keep culture going, the people of Barcelona can visit many facilities in July and August for free. People who show an ID proving they work in the country’s health sector can also attend for free. "This heals some wounds," says festival director Herreruela.

Nevertheless, the city buses are practically empty; what one sees significantly more of are bicycles. Barcelona’s mayor, Ada Colau, used the lockdown to build even more bike paths in order to make the city more livable for its residents. For many people in Barcelona, ​​it is a new experience to have the streets and squares largely to themselves, to use and enjoy at their leisure.

An end to overtourism?

The big question for Barcelona remains that of how the city intends to shape tourism in the future. The pandemic forced a chance to redefine the city’s relationship with tourism. "The pandemic has ensured that the mass tourism of 2019, with 30 million visitors, will not come back," says Xavier Marce, the city's tourism commissioner.

But he also knows that the city still has no alternative plan. Tourism accounts for some 12% of the city’s GDP — and it's not clear what could replace that. "It's an experiment, what we're doing — trying to survive without the tourists from cruise ships or the many often annoying buses from the Costa Brava," explains Marce. 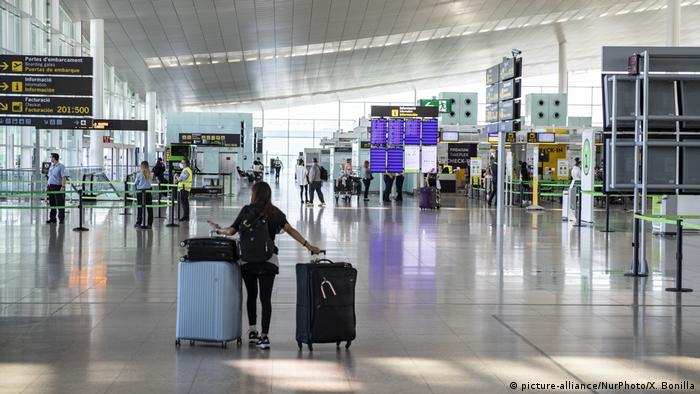 Not everyone likes the mandatory provision of personal data upon entry, and body temperature is measured remotely by a thermal camera. The few vacationers who stroll through the city these days have mostly traveled by car from Italy or France.

Hope for a new beginning

Herreruela's eyes look melancholy over his black mask: "Fewer tourists is good for some, but for many it's a drama." Only with the support of locals can hotels, cultural institutions, restaurants and bars survive.

Barcelona has experience in overcoming crises. In 2017, an armed attacker raced into a crowd with a small truck in the center of Las Ramblas, killing 14 people. The shock paralyzed the city for weeks, but it didn't keep the tourists away fro long.

It makes Felix Navas, Managing Director of Catalonia Hotels, somewhat optimistic that the pandemic can also be managed. Sixteen of the chain's 26 hotels in the city have been open again since mid-June. The 4-star hotel on Plaza Espana was a COVID-19 emergency camp for the Hospital Clinic just a few weeks ago. Now, 25% of beds have been booked.

It is also deserted at the nearby Fira de Barcelona exhibition center. "The cancellation of the Mobile World Congress in February, which brings hundreds of thousands of people to Barcelona every year, made it clear to everyone that something dramatic was taking place here," explains Xavi Bufi, deputy director of the hotel.

Whether the world's largest telecoms show will take place in 2021 depends on how the pandemic continues. Meanwhile, Amaia, one local bartender originally from Sevilla, is happy that she is among people again, even if they are few: "I couldn't stand it at home anymore." 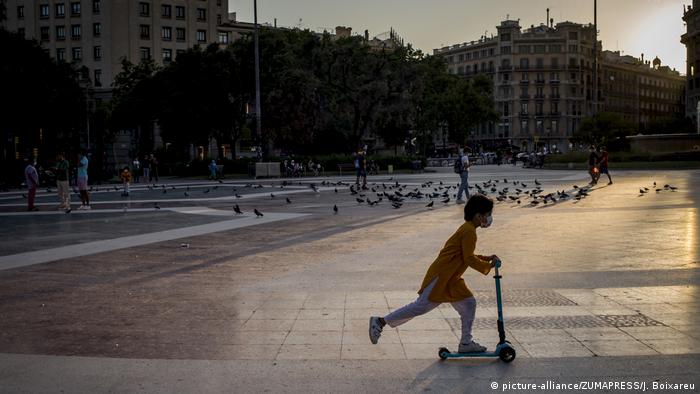 This child is enjoying the unusual amount of free space on Barcelona’s main square, Plaza Catalunya

Tour guide Reurings is divided: "When people ask me whether it is safe to come to Barcelona, ​​I don't know what to say. However, I believe that 2020 offers the opportunity to enjoy treasures like the otherwise completely overcrowded Parc Guell in a special way." Up to 400 visitors usually show up here in half an hour. Fewer than that now come in an entire day. For a city trip to Barcelona, ​​where you want to see the sights in peace, there is no better summer than this.

The COVID-19 epidemic poses a threat to the everyday life of people worldwide. Travelers are particularly affected, as are people working in tourism. Here are the latest developments. (15.07.2020)

The 10 most popular holiday destinations for Germans

Mediterranean or the Alps? Germany is lifting its European travel warning from June 15, Germans will be able to go abroad again. These are their favorite destinations, according to the German Travel Association in 2019. (03.06.2020)