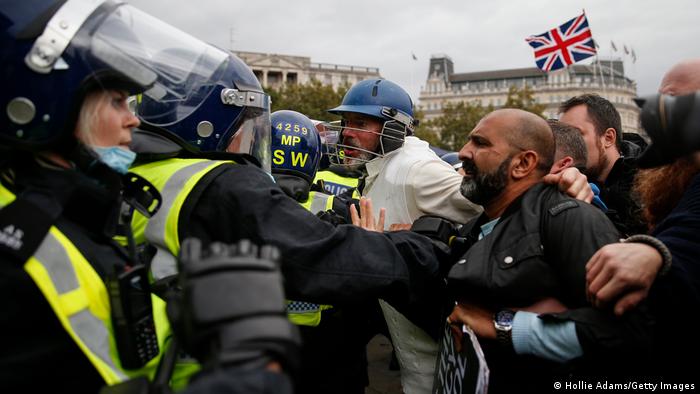 Police and protesters clashed in London's Trafalgar Square on Saturday after officers tried to break up a rally against coronavirus restrictions.

At least 10 people were arrested and four officers were injured, including two who had to be hospitalized, police said.

Thousands of anti-lockdown demonstrators had gathered in the British capital chanting "Freedom!" and waving banners with messages such as "No to mandatory vaccines," "We do not consent" and "COVID-1984."

But things turned violent when police ordered the crowd to disperse, warning protesters they were violating the very social distancing and mask-wearing rules they had come to demonstrate against. Video footage showed officers using batons to drive protesters back, as people pelted them with bottles. 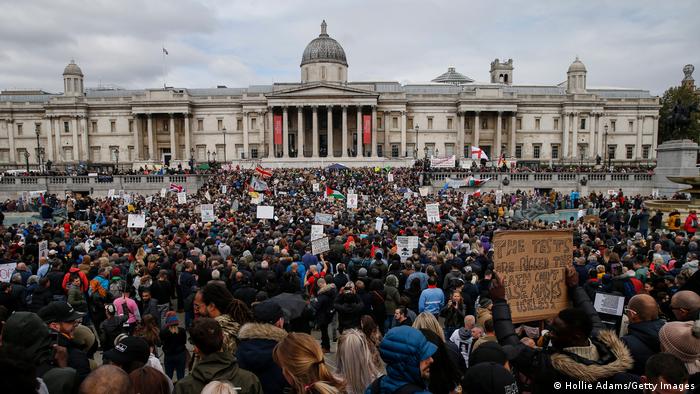 Britain's COVID-19 regulations limit gatherings to six people. But protests are exempt from that rule — on the condition that participants wear masks and adhere to social distancing.

"We want to be clear, this protest is no longer exempt from the regulations," police announced on Twitter about three hours after the protest began.

"We are asking those attending to disperse. Sadly, some officers have been injured while engaging with people."

"This is not acceptable. I urge all protesters to leave now," London Mayor Sadiq Khan said on Twitter. "Large gatherings are banned for a reason — you are putting the safety of our city at risk."

Many demonstrators then moved from Trafalgar Square to join another group amassing in Hyde Park.

Groups of protesters have staged regular rallies in recent months over what they argue are unreasonable government-imposed curbs on everyday life. Police arrested 32 people during similar clashes in Trafalgar Square last weekend.

A number of German cities have also seen recent protests against coronavirus restrictions.

Saturday's rally came after Prime Minister Boris Johnson this week announced new rules amid a sharp rise in infections. The measures included a 10 p.m. curfew on pubs and restaurants, tougher face mask requirements and heftier fines for those not complying. Some lawmakers, including those from Johnson's own Conservative Party, have criticized the prime minister for implementing new regulations without a vote in Parliament.

With nearly 42,000 confirmed fatalities, Britain has the highest coronavirus death toll of any country in Europe. On Saturday, it reported more than 6,000 new cases and 34 deaths.