Coronavirus: No lockdowns in Sweden, for now | Europe | News and current affairs from around the continent | DW | 24.03.2020

Coronavirus: No lockdowns in Sweden, for now

Life is at a standstill in most EU countries, but in Sweden the daily routine continues as normal. But with the number of infections on the rise, how long will the country stick to its relaxed approach? 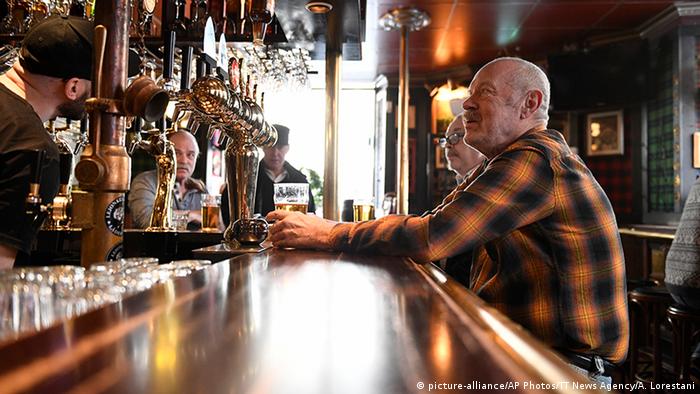 In his nationally televised address, Prime Minister Stefan Lofven did not mince words. "The infection is spreading in Sweden. Life, health and jobs are threatened. More people will fall ill, more will have to bid a loved one their last farewell," he said on Sunday.

According to data from the World Health Organization (WHO), at least 2,200 people have been infected with COVID-19 as of Tuesday afternoon, and 36 have died. By comparison, in Germany the number of infections has reached 31,200, and 132 people have died.

But unlike in Germany and many other EU countries, public life in Sweden has not yet ground to a halt. The center-left governing coalition has, so far, not imposed social restrictions or confined people to their homes. Instead, it has relied on common sense, recommending that people stay at home if possible, refrain from unnecessary travel and restrict social contact with older people.

Shops and restaurants are still open, EU citizens are still allowed to enter the country and large public events are still taking place, albeit with no more than 500 people. Kindergartens and schools, up to and including ninth grade, are still in session — at least until the upcoming Easter holidays.

Not everyone is OK with the relaxed attitude. On Monday, Saskia Pantell, head of the Zionist Federation of Sweden, posted a photo on Twitter showing a stretch of crowded bar and restaurant terraces, with young patrons sitting close together and enjoying the spring sunshine. "This is insane!" she wrote, adding that she was "actually scared of staying in Sweden" during the outbreak.

Anders Tegnell, Sweden's top epidemiologist, has been under increasing pressure. On March 5, he said that the spread of the epidemic had probably reached its maximum. At the time, only 94 people were infected in the country, a figure that has since shot into the thousands.

To the utter consternation of many Swedes — including former Prime Minister Carl Bildt — Tegnell said in a TV interview on March 18 that it was safe for people who live in the same household as an infected person to continue going to work or to school.

Some people have started taking the matter into their own hands. Ahead of the Easter school break in mid-April, when many Swedes usually crowd the ski slopes, resort operators have begun demanding stricter controls from health authorities, among them resorts in the popular Jamtland Harjedalen region.

According to a report by Sweden's SVT national broadcaster, hundreds of tourists were still partying in slopeside clubs this past weekend. But many restaurants and clubs in the ski towns of Are, Salen and Idre have already shut their doors.

The reaction to the COVID-19 outbreak in neighboring Denmark couldn't be more different. Prime Minister Mette Frederiksen, dubbed the "corona-commander-in-chief" by the local press, has essentially shut her country down, banning events with more than a hundred people and closing universities, schools, kindergartens, libraries and cultural institutions. Denmark was one of the first EU countries to close its borders on March 14.

When it comes to testing suspected coronavirus cases, Stockholm is also acting against WHO recommendations. In the first few weeks of the pandemic in Sweden, anyone who had returned from a high-risk area or who had come in contact with an infected person and was showing symptoms could be tested.

But now only those people who belong to a risk group, or who have serious breathing problems, are considered a priority, according to health authorities. Patients without pre-existing conditions but who are showing symptoms of COVID-19 aren't tested. They've been told to simply stay at home until they recover.

"We no longer have time to wait for the test results," said Karin Tegmark Wisell, a microbiologist with Sweden's Public Health Agency. "We have to work faster and go one step beyond the tests. We recommend that all patients with symptoms limit their social contacts."