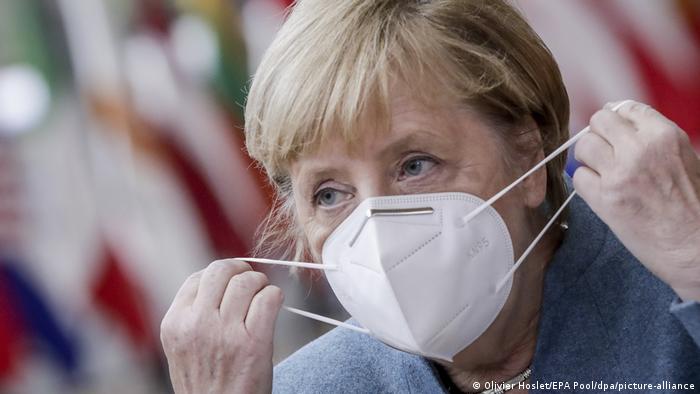 Chancellor Angela Merkel on Tuesday urged Germans to "stick to what we know" about the coronavirus as the country battles a second wave of infections.

"We know how we can protect ourselves. We can proceed with a more targeted response," she said in Berlin. "But we also see with the rising numbers that if we do not stick to what we know about the virus, we get ourselves back into situations are that are decidedly difficult."

Merkel was speaking ahead of a key meeting with state leaders, brought forward to Wednesday, at which she is expected to push for tougher restrictions to curb the spread of COVID-19.

According to a report in the Bild newspaper, the government is mulling a series of new measures that include restaurant and bar closures and a ban on public events. Schools are expected to remain open, except in regions with severe outbreaks.

Merkel is meeting with Germany's 16 state premiers, who she must convince to agree to the restrictions, which were described by Bild as "lockdown light." Measures taken to combat the coronavirus pandemic in Germany are decided at the state level.

Read more: Coronavirus in Germany: How the federal system hampers the fight against the pandemic

He urged federal and state leaders not to come up with "halfhearted measures, but rather an effective concept."

Most Germans are expecting the government to impose drastically tougher restrictions, according to a YouGov poll commissioned by news agency dpa. More than 60% expected restaurants, shops or schools to shut.

Finance Minister Olaf Scholz has echoed calls for a uniform approach. "The additional measures should be targeted, temporary and focused," he said. "And they should be implemented as uniformly as possible across Germany and be generally understandable."

Ahead of the meeting, Economy Minister Peter Altmaier warned Germany could reach 20,000 infections per day by the end of the week.

"We are dealing with exponential growth," he told a virtual German-French economic conference in Berlin on Tuesday. "In Germany the number of new infections is rising by 70-75% compared to the week before."

Germany reported 11,409 new cases on Tuesday, up from 6,868 on the same day last week, according to the Robert Koch Institute, the country's national disease control agency. Germany reported a record 14,714 cases in a 24-hour period on Saturday.

Health experts are warning of a new surge ahead of Eid al-Adha celebrations. They say the holiday could fuel a new coronavirus wave as cases in Pakistan are already on the rise.

China's largest city is testing more than half of its population as it attempts to curb an outbreak of the coronavirus. After more than two years, Italy has ended its state of emergency. Follow DW for the latest.

The Saudi government has lifted social distancing measures, allowing full-capacity attendance at the Grand Mosque in the holy city of Mecca for the first time since the start of the pandemic. Follow DW for the latest.