Johnson & Johnson is pushing back the EU rollout of its single-dose vaccine following reports of blood clots. Previously, US authorities had urged a pause on use of the vaccine. 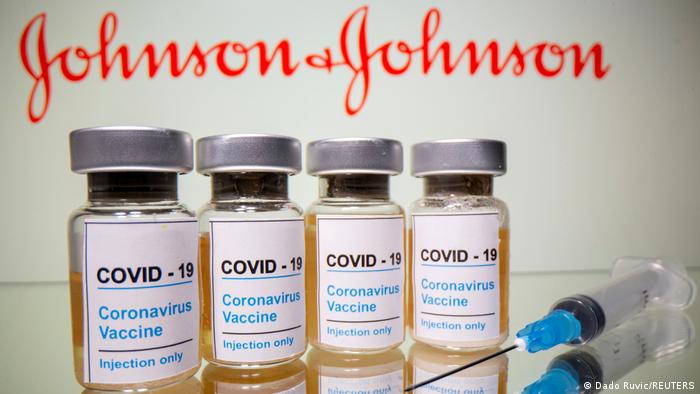 Johnson & Johnson announced that it would delay the rollout of its vaccine in Europe after US officials urged a pause on administering the jab earlier on Tuesday.

"We are aware of an extremely rare disorder involving people with blood clots in combination with low platelets in a small number of individuals who have received our COVID-19 vaccine," the pharma giant announced in a statement, adding the company has been "reviewing these cases with European health authorities."

The US company had sent its first vaccine delivery to Europe earlier this week. It was scheduled to send about 50 million doses by the end of June.

Paused in the US

Earlier on Tuesday, US health agencies recommendedan immediate pause on use of the Johnson & Johnson coronavirus vaccine, according to a US Food and Drug Administration statement released Tuesday.

According to the FDA, six vaccine recipients developed rare blood clots within about two weeks of being inoculated.

The recommendation, made in tandem with US Centers for Disease Control and Prevention (CDC), means that federal vaccine distribution channels, including mass vaccination sites, will pause the use of the single-shot vaccine.

After the J&J vaccine was granted emergency approval by regulators in late February, more than 6.8 million doses have already been administered in the US, which is a small fraction of the estimated 120 million people who have received at least one dose of COVID-19 vaccines in the United States.

How long will the J&J suspension last?

A CDC advisory committee will meet Wednesday to discuss the six blood clot cases, and the FDA will also investigate.

"Until that process is complete, we are recommending a pause in the use of this vaccine out of an abundance of caution,'' Dr. Anne Schuchat, the principal deputy director of the CDC, and Dr. Peter Marks, the director of the FDA's Center for Biologics Evaluation and Research, said in the joint statement.

The New York Times reported that all six of the cases were found in women between the ages of 18 and 48. One woman died, and another has been hospitalized, the paper reported, citing officials.

In a statement from Jeff Zients, White House COVID-19 Coordinator, he said the pause "will not have a significant impact on our vaccination plan."

He added, "we are working now with our state and federal partners to get anyone scheduled for a J&J vaccine quickly rescheduled for a Pfizer or Moderna vaccine."

The Amsterdam-based European Medicines Agency said it "is currently not clear whether there is a casual association between vaccination with COVID-19 Vaccine Janssen and these conditions" after the US announcement.

In an email to AP, the European agency's safety committee said it "is investigating these cases and will decide whether regulatory action may be necessary."

The EU ordered 200 million doses of the J&J vaccine in 2021, enough for nearly half of the European population. The UK ordered 30 million doses, but country regulators have not yet approved its use.

Spanish Prime Minister Pedro Sanchez said the benefits of all of the approved COVID-19 vaccines outweighed the potential risks. He said that authorities would slow down the rollout of vaccines if serious side effects were reported, however.

Eleanor Riley, a professor of immunology and infectious diseases at the University of Edinburgh, told Reuters that more data was needed to make a full conclusion. But "it remains the case that for the vast majority of people the risks associated with contracting COVID-19 far, far outweigh any risk of being vaccinated."

Sweden will decide on use of the Johnson & Johnson vaccine in the coming days. It will receive its first doses later this week.

The Nordic country previously paused the use of the AstraZeneca vaccine in March, but resumed its use for people 65 and older.

How will the US emerge from the pandemic?

India has given the green light to fast-track emergency approvals for foreign-approved COVID-19 vaccines as infections surge. It could pave the way for imports of Pfizer, Johnson & Johnson, Novavax and Moderna shots.

India is grappling with a shortage in inoculations, as a new wave of infections grips the country. Several states and vaccination centers have reported an unfulfillable demand.

Pharma companies BioNTech and Pfizer have sought approval for the emergency use of their COVID-19 vaccine in adolescents aged 12 to 15 in the United States. All the latest COVID-19 news from DW.