Coronavirus in Germany: Music at a distance brings Berlin street together | Germany| News and in-depth reporting from Berlin and beyond | DW | 20.04.2020

A month ago, amid the coronavirus lockdown, the Berlin flutist Bianca Hase started giving a daily "window concert." Her initiative has now grown into an ad hoc street orchestra that plays every evening.

The sidewalk is the stage; the car roof is her music stand. Every evening at 6 p.m., children and a few adults gather in front of Bianca Hase's house — or at some of its windows — in Berlin's Mitte district to make music and give a brief concert in Strelitzer Strasse amid the coronavirus crisis. The 44-year-old Hase is at the center of activities; she distributes music, encourages the youngest, makes sure the participants are keeping at a safe distance from each other, strikes up the songs on her flute and visibly enjoys watching the youngest players have fun.

When did she start doing this? "After the clapping," Hase says spontaneously. But then she has to think long and hard about when that was exactly. Some four weeks ago, lots of people responded to a social media appeal to clap from balconies and windows at nine in the evening for doctors and carers on duty during the coronavirus crisis. This was quickly followed by an appeal to musicians to make music in the evenings at the same time. So Hase, a concert flutist, took her instrument, stood by her window and played. And did the same the next day as well.

'Connection at a distance'

"My children thought it was great that I was playing music from the window," Hase, a mother of three, tells DW. And other children and adults also voiced enthusiastic reactions from the windows of her five-story apartment house. Soon, a trombonist from the next house whom she had known for some time joined in. "It was simply wonderful to connect up over the prescribed distance," she says.

Hase relates how other people in the house showed a growing interest in her music-making. She moved from her window to her car, where she now stands on the driver's seat to give her concerts, sticking her head through the opened sunroof. Her music is stuck to the roof in front of her. "It is there for everyone," she says. "But I would never have thought that so many people, both children and adults, would join in." 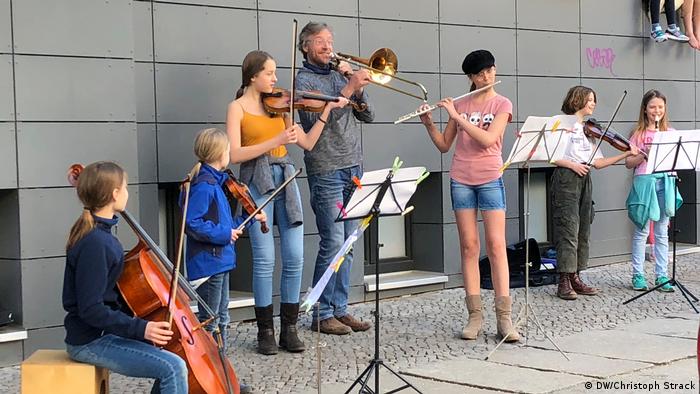 Around 20 people now take part in the daily street concert

Now, four weeks later, about a dozen children gather every evening on the pavement. They have violins of various sizes; one cello is almost bigger than the girl who plays it. There are recorders, as well as a triangle and a cajon, a box-shaped percussion instrument. Hase's daughters have a xylophone and a recorder. Adults also join in, and not just parents of the children playing. Somewhere on the fifth floor there is a guitarist at the window; a clarinet sounds from somewhere else. Hase's husband has put a loudspeaker for his keyboard on the window sill. Further up, a brass instrument can be heard, while more flutes join in tentatively from other places.

Hase finds the story particularly nice about how one neighbor came to join in with her guitar. This woman had told relatives how lovely it was to hear the music every evening. "Then she was reminded that she had played guitar herself more than 25 years ago and that the instrument still had to be somewhere around," Hase recounts. Now the neighbor plays along as well, as do other neighbors who have dug out instruments that they learned many years ago. "Both old and young rehearse very intensively," says Hase, who admits not having had very much to do in the past with many of the participants, even those from her own apartment house. "You need someone to start off, then the others are pulled along," she says.

Mostly, this mixed orchestra plays just two pieces per concert. It could be "Over the Rainbow" or "What a Wonderful World," or perhaps "Hallelujah" by Leonard Cohen. Hase wants to present familiar music and makes sure the melodies are not too complicated. Neighbors in the houses opposite listen to the evening concert from their windows, and there are always two or three dozen music lovers on the street as well. The Strelitzer Strasse is a fairly quiet residential street with little traffic. Hase says cars have sometimes stopped and their drivers have opened the windows to listen. And she says that the 6 p.m. concert has now become "a daily fixture" for people in the surrounding houses, with audiences growing as the weather becomes finer.

Asked about what she thinks has been the nicest scene during the concerts, Bianca Hase tells of an elderly lady at one of the windows on the other side of the street who mostly starts waiting for the concert quite a long time before it begins, and always listens with gratitude and applauds. The lady, who has lived there for more than 40 years, receives her meals from a charity organization, Hase says, and apparently is not allowed to leave her house during the coronavirus pandemic. "But at Easter, she passed down a bag with chocolate eggs for the children who were playing," Hase says.

"Without music, life would be a mistake." Friedrich Nietzsche knew what he was talking about. Here, then, is a list of songs with a common thread to — hopefully -— make you chuckle and brighten up your day.* (04.04.2020)