The Chinese capital recorded 31 new cases Wednesday, as the worst resurgence of COVID-19 in the city since February continues. Many domestic flights in and out of Beijing have been canceled. 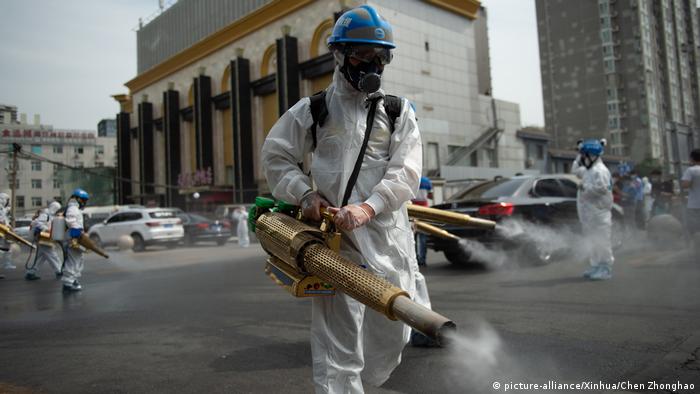 The "closed management" orders require that entry points to all residential communities be guarded 24 hours a day, with strict registration measures enforced and controls on movement of people.

The local government also raised its COVID-19 alert level, as the outbreak has spread to multiple districts in the city. China's capital had downgraded its alert level just 10 days ago.

Communist Party secretary Cai Qi recommended that authorities "round up everyone who should be rounded up," a directive not seen in China since the virus first broke out in the central city of Wuhan.

All unnecessary travel out of the city has been stopped, and anyone who needs to leave must present proof of a negative COVID-19 test. Around 70% of all flights leaving and entering Beijing airport were canceled.

Beijing had succeeded in essentially eradicating local transmissions of the virus within city limits. But 137 new infections have sprung up in the city since last week, stoking fears of a second wave of outbreaks in China. No new deaths have been reported.

With the city's virus threat level raised from 3 to 2, classes and other openings were canceled and social distance requirements were heightened.

Roads and highways remained open and businesses were allowed to continue working.

The semi-autonomous territory of Macau on China's south coast imposed a 14-day medical observation for all arrivals who have been in Beijing in the last two weeks.

The Beijing outbreak has been traced to the Xinfadi wholesale food center, a market that serves as a main source of the city's food supply. Xinfadi is much larger than the Wuhan seafood market, from where the virus is believed to have originated before spreading around the world, infecting over 8 million people.