As restrictive measures are being enforced in northern Italy to contain the coronavirus outbreak, Italy edges toward recession. But its ability to service its debt is not at risk, as Sergio Matalucci reports from Milan. 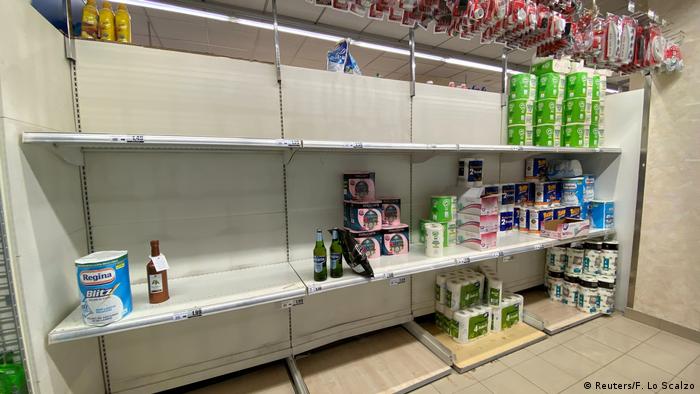 Many locals, especially elderly people, keep flocking to supermarkets in northern Italy to stock up on food items before retreating home in a self-inflicted quarantine. "This is crazy," says a woman pointing at the chock-full shopping cart of the person before her. "Better safe than sorry," answers the man wearing a military jacket with an Italian flag. He is about to buy 9.5 gallons (36 liters) of water, several kilos of pasta, tins of tomato sauce, honey and propolis-based candies.

This sort of panic buying has been very much in evidence over the last four days in Milan, Italy's second-biggest city.

Just a few hours after the final show of the Fashion Week on Monday evening, the city's key transportation lines were crippled. Trains departed from Centrale (Milan Central Station) with a four-hour delay on average. The new coronavirus is paralyzing northern Italy.

"Lombardy and Veneto, the regions currently hit, are among the richest, the most dynamic and the most export-intensive in Italy. The economic effects of the coronavirus crisis on Italy's economy may be serious. It is the heart of Italy's economy being hit," Francesco Daveri, professor of macroeconomics at SDA Bocconi School of Management, tells DW.

Italy's ability to service its debt is not being questioned for the time being. "These regions are also the ones best prepared to react and start growing again when the crisis goes away. So the financial effects of the crisis on the ability of Italy to service its public debt are not a headache as such."

The Bank of Italy estimates a 0.2% loss of GDP growth due to the coronavirus crisis.

"Italy may still enter a recession if the first quarter of 2020 is negative. This would imply two consecutive quarters of negative growth," adds Daveri, explaining that the tourism-related sectors are the ones paying the highest toll.

"The loss of tourist activities engenders less income for transportation, hotels and restaurants, and for those industries whose goods and services are disproportionately bought by tourists such as food and high-end clothing. Some of them are Italy's most successful industries."

Italy has reported at least 250 cases and seven deaths from the virus so far. All the fatalities had serious preexisting health issues. Lombardy authorities decided to impose restrictions on opening hours for bars and pubs. Schools, universities, cinemas, clubs and museums remain closed.

Several brands, like Armani, called off their fashion shows. Sources reported that hotel chains are considering temporary closures throughout Milan. Many restaurants, including the famous Trippa Trattoria-Milano, decided to remain shut for a few days.

The economy and finance minister, Roberto Gualtieri, is launching measures supporting the "red zone," a dozen municipalities under lockdown. These are rural areas close to the locations of the 2017 movie "Call Me by Your Name." It remains unclear whether and how these measures will be extended to other areas. 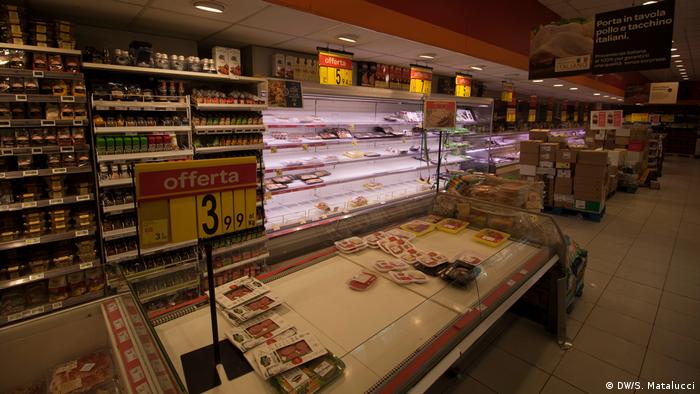 It doesn't mean that there are no winners in this environment — quite the opposite. "If students do not come to class, then bars and pizzerias close to universities stand to lose. Yet students staying home will anyway feed themselves in convenience stores and supermarkets, which turn out to be winners," concludes Daveri.

"In Lombardy and Piedmont, we recorded an unforeseen and unusual peak in sales for the month of February, with purchases of mainly stock products," Carrefour's press office tells DW.

Esselunga, another supermarket chain in northern Italy, reported "a 100% increase over the weekend."

Many pictures of empty shelves in Milanese supermarkets have circulated on social media channels, but supermarket chains argue that the situation is under control, adding that there are no shortages of products in their warehouses.

"We do not expect to have any [shortages]. The biggest challenge is to accelerate shelf-replenishment," comments Sami Kahale, Esselunga's CEO.

If queues at semi-empty supermarkets tell their own story, e-commerce is the segment displaying the most impressive figures. Carrefour's e-commerce service recorded traffic 10 times the normal levels. Esselunga's online growth has grown fivefold.

Companies producing sanitizers are equally benefiting from the situation. Amuchina, a disinfectant launched in the 1930s to fight tuberculosis, was the most common term searched on Google on Sunday, according to a report by AvantGrade.

Angelini Pharma published a note on Monday condemning private resellers-cum-speculators. A 500-ml Amucina bottle was available on Tuesday morning on Ebay at prices ranging from €4.99 ($5.40) to €38.99.

'Panic could distract from serious risks'

Ilaria Capua, a virologist who's supported open-access digital platforms for the scientific community to share genetic information on viruses, argues that the real number of infections is significantly higher than official data.

"It is too early to say, but I would not be surprised if there were thousands of people infected in Italy," he said. "It probably spread causing little damage. I also think that coronavirus is not only an Italian problem. Coronavirus has spread throughout Europe," Capua tells DW.

The coronavirus risk is considered by some experts to be overestimated, and this in itself might be a problem. Western societies might end up playing down other health priorities, some argue.

"I am concerned that, because of the attention now being paid to the coronavirus, other issues will be overshadowed. In particular the African swine fever, a disease common in wild boar, is a serious risk. If it enters into the domestic animal circuit, it can cause inestimable economic damage," Capua warns.

As Italy prepares to host a European summit over the crisis, more cases have erupted across the bloc. Iran, which has the highest death toll outside China, has seen infections spike. Get the latest developments here. (25.02.2020)