Coronavirus: Germany to draft new law amid rise in working from home 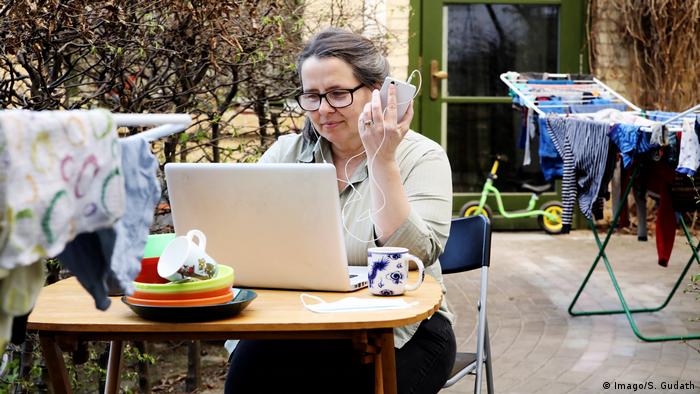 Despite facing reticence within German Chancellor Angela's Merkel coalition, Labor Minister Hubertus Heil of the center-left SPD on Saturday reiterated his intention to submit a draft law to regulate working from home.

"Nobody should be forced to be available for the employer around the clock — neither at home, not the [normal workplace] office," Heil told the Hannover-based newspaper chain Redaktionsnetzwerk Deutschland (RND).

The temporal boundary between paid hours worked and private life must not be eroded, he insisted, acknowledging that some industrial jobs, like those of bakers, would still require attendance on factory floors.

Read more: Furniture retailers in Germany must go digital to stay in the selling game

In June, he had told Berlin's Tagesspiegel newspaper: "I don't want to force anybody into working-from-home," adding, however, "we need clear rules."

Fixation on workplace, prior to Corona

Prior to the global coronavirus crisis, 11% of Germany's 42-million workforce carried out their duties regularly or occasionally from home, Germany's statistics bureau noted in 2017, reflecting employers' erstwhile insistence that staff commute to work.

While a physical presence has prevailed in manufacturing, so-called "home office" has boomed in other crisis-hit sectors — thanks to the internet — and will remain, found the Mannheim-based ZEW economic research institute last month.

And, even in the manufacturing sector, "more than half of the large companies expect a permanent increase in the number of home offices;" said Erdsiek.

German unions have been pressing for rules, including IG Metall, which found in a survey in April that while 78% would prefer the option, almost half (48%) had no separate workplace — adjacent to living rooms — and had to find equipment themselves.

Will sort itself out, claim business leaders

Challenging Heil's drive within Merkel's coalition in recent months has been Jana Schmike, a conservative parliamentarian and vice president of the MIT medium-sized business bloc within Merkel's center-right CDU party.

On public ZDF television on July 28, Schmike argued that Heil's initiative would only "create more bureaucracy" and that businesses were adopting mobile working practices anyway.

"Why must the state interfere in the innermost occupational processes, when we see that in the end, it takes care of itself," exclaimed Schmike, adding that she rejected insinuations that employers were only set on exploitation.

Read more: An office of one's own: how work from home magnifies inequality

Labor Ministry State Secretary Björn Böhning replied that Germany lacked a "home office" legal framework, which would "provide for health and safety in emergency situations, including how work is organized."

Scandinavian countries and the Netherlands already had such labor laws and double the amount of working-from-home, said Böhning. "It's the right way to go."

Completely absent, currently, said Onnis, were regulations on health and safety for employees at home, such as arrangements for "an ergonomic workstation, a good office chair, a decent computer screen."

Working from home a 'right'

Germany's environmentalist Greens in June submitted a parliamentary resolution calling for a "right to home office," but still integrated into fixed workplace jobs, and with equipment provided, saying details were up to trade-union employer bargaining.

Thirty percent of Germany's workforce desired mobility, at least every now and then, said the Greens, to achieve more temporal autonomy, and not only to better juggle family and employment obligations.

In what it billed as Germany's only before-and-after pandemic survey, the DAK health fund in July said there had been a 3-fold increase in "home office" activity, as well as higher worker satisfaction.

Three-quarters of those interviewed hoped to continue working from home, at least part-time, it said.

Commissioned by DAK to sample 7,000 respondents in December and 6,000 in April, the research institutes IGES and Forsa found that before the pandemic three-quarters of managers placed a high value on worker presence in the firm.

Sent home to work, a third of employees have since taken part weekly in numerous video and telephone conferences, whereas beforehand only one-in-six had done so.

Among employees, 59% rated their own productivity higher and 68% appreciated the time-saving in not having to commute to-and-from work.

Three-quarters, however, said their isolation denied them spontaneous access to colleagues, "to discuss matters at short notice — even with the boss (48%)."

And, 41% said they missed sufficient access to files or other workplace documents.

"Working from home not only reduces the risk of viral infections," DAK chief Andreas Storm concluded, "but [it] also pays off in terms of emotional balance," stressing that negative and positives aspects needed to weighed up.

"In the Corona crisis, we are gaining valuable findings to redefine healthy working for the digital future," said Storm, a former CDU State Secretary in the Labor Ministry, now headed by the SPD's Heil.