Coronavirus: Germany lets its hair down in ′home offices′ | Germany | News and in-depth reporting from Berlin and beyond | DW | 24.05.2020

Coronavirus: Germany lets its hair down in 'home offices' 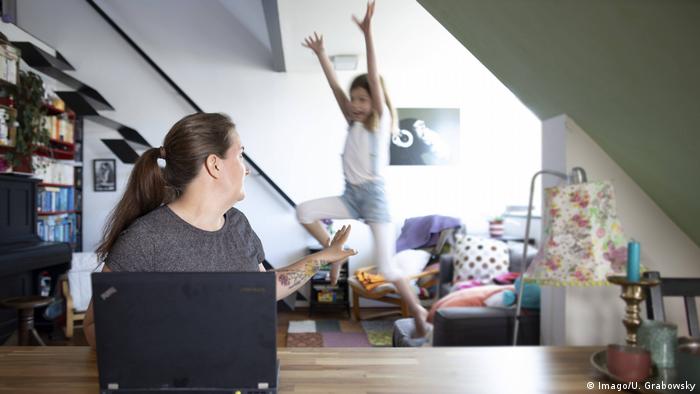 The embarrassing moment in the interview on Germany's Spiegel TV starts 24 minutes in: The door behind The Greens co-leader Robert Habeck opens. Habeck turns around and makes a gesture as if to send someone away. The door shuts again. But shortly afterward, it opens once more and Habeck's son comes in with his shirt off.

"You're on television," Habeck says with a helpless smile. Spiegel-TV presenter Markus Feldenkirchen smiles as well. "We've all been experiencing the occasional surprise visitor of late," he says.

A few moments later, the door opens again, and Habeck's son leaves the room, this time fully dressed. Habeck rolls his eyes. When the door is shut from the outside, he is visibly relieved.

There are many scenes like this to be found on the internet now, and not just from Germany.

Germany is changing. In the coronavirus era, digital conferences and TV links are penetrating into private spaces and showing what it is like there. Digitization is transforming home decor. The home workspace — Germans like to call it home office — is dominated by computers with headsets, notebooks and smartphones. Televisions, multiband radios and dictation machines are no longer often found on desks and kitchen tables. And the dress code is no longer taken as seriously. 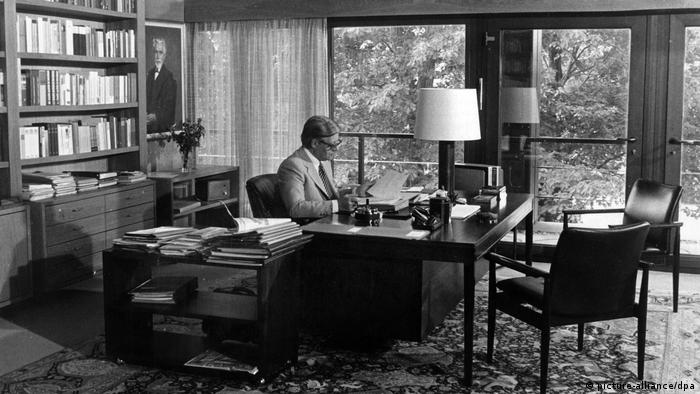 Once upon a time: German Chancellor Helmut Schmidt with stacks of files in his study in the Chancellery in Bonn in 1976

T-shirt instead of tie

"There is a tendency to let etiquette go a bit by the board," says Wolfgang Beck, head of the media studies program at the Sankt Georgen Graduate School of Philosophy and Theology (PTH) in Frankfurt.

During video conferences, many participants are now appearing in T-shirts rather than in shirt and jacket, and people are quick to adopt the informal "du" form in German when addressing others. "You could speak of Americanization or Scandinavization," Beck says.

But Beck adds that the coronavirus crisis is only reinforcing a trend that already existed. "The move toward a more relaxed style was there previously. This is the acceleration of a development that is loosening things up a bit across the whole of society," he says. 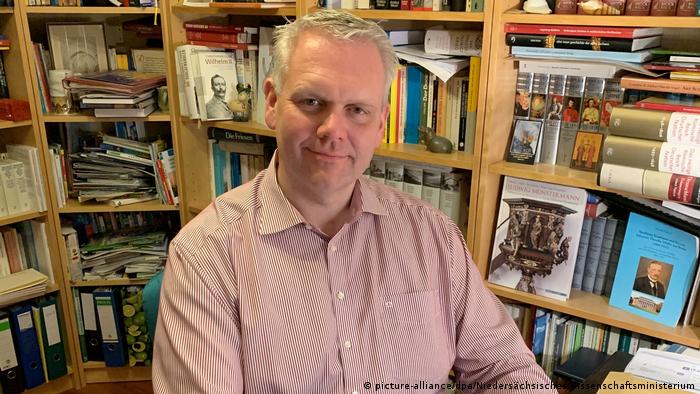 What chaos? For some, you can never have enough books. Lower Saxony's Science and Culture Minister, Björn Thümler, in front of a backdrop of books in his home office

Despite this more relaxed approach, there is still a strong tendency for people to want to give themselves an individual profile in front of the webcam.

One piece of furniture in a home office space plays a very special role as backdrop during a video conference. "With my colleagues in the academic field, the bookshelf in the background is very important, and sometimes it is even lit up," says Beck.

The Twitter accounts @RateMySkypeRoom and @BookCredibility have specialized in the humorous evaluation of this decorative and strategic background element.

US former President Bill Clinton, who has posed in front of a shelf with books displaying the American flag and a large number of CDs, comes off well here. "Remember relative prosperity and competent government?" the post about him says. "Has CDs. The '90s were cool."

But others go an alternative route. Swiss journalist Joelle Weil, for example, deliberately does without any intellectual touch in her video appearances, instead, giving glimpses of her kitchen; for her, this is a new way to rebel.

Kitchen, clutter, or clothing racks: The indiscreet digital tools available are revealing the private lives of millions of people worldwide. Children pop up in front of screens, and dogs bark into conference rooms. A crucifix on the wall or a statue of the Buddha on a shelf betray very personal characteristics such as religious affiliation.

It has never been as easy to get a view of someone else's couch or the size of someone's office chair, the run-down ugly wallpaper, untidy closets and dirty kitchen tables — or to even recognize your own Ikea furniture in the home of people you are talking to.

To protect himself and others from indulging too far in this type of curiosity, Wolfgang Beck from the Sankt Georgen theological school sets certain rules."I expect students to not lie in bed when we hold a lecture as a video conference, but to sit on a chair at a table," he says. "I don't want to see everything; some things should stay private."

And Zoom, Jitsi and other conferencing platforms also provide the option of selecting a virtual background. That way, no one gets to see spaces that are meant to be private.

Office workers these days are swapping blazers for pyjamas, uncomfortable desk chairs for their own couch. The spread of the coronavirus changes the way many of us work — and we might just get used to it. (20.03.2020)

How the coronavirus impacts our work