An office of one′s own: how work from home magnifies inequality | Business | Economy and finance news from a German perspective | DW | 05.06.2020

As the world enters a "new normal" after coronavirus-related lockdowns, governments face the challenge of tackling growing social divides, both in economic and health terms. 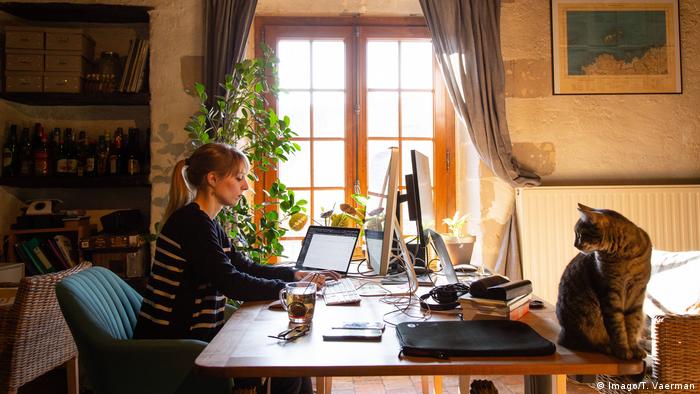 In A Room of One's Own, British author Virginia Woolf laid out how economic dependency (on men) and a lack of private spaces kept women from writing. She identified how material conditions set the ground for social inequality. Having money and a room to write were (and often still are) male privileges.

Similarly, the ongoing COVID-19 pandemic has exposed, and even reinforced, another kind of privilege, that of having an office of one's own — at home. Businesses, organizations and institutions all over the world have forcibly embraced remote work as coronavirus-related restrictions have made it impossible or impractical to have workers work from offices. Yet, despite a wave of social media hashtags and stickers, not everyone can work from home. And that gap has a price.

A number of experts agree that the "new normal" of widespread remote work has not generated new inequalities, but deepened some pre-existing disparities. "There is a clear inequality between those who have the possibility to work from home and those who still have to go to the office," Katja Möhring, a professor at the University of Mannheim, told DW. 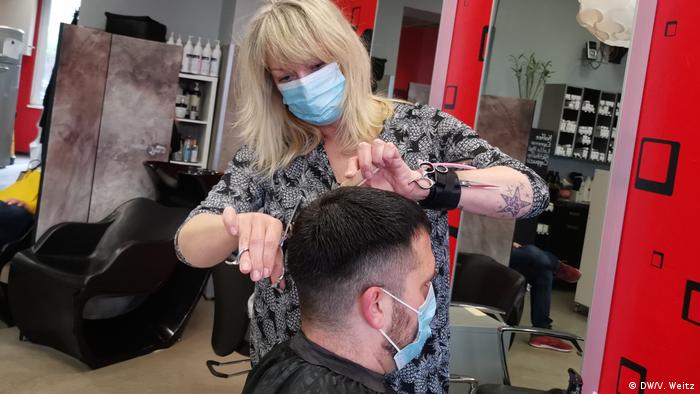 University of Mannheim in Germany has conducted a study showing some 44% of workers who hold university degrees telecommuted, while among those with only compulsory basic secondary schooling the number went down to 10%

Katja Möhring is co-author of a study made during the first phase of the lockdown in Germany. It suggests that people with higher incomes have had more opportunities to do remote work. Notable exceptions include surgeons and others whose jobs require physical presence.

Even though different experts have voiced concerns about how stay-at-home orders burden mothers more than fathers, the study by the University of Mannheim did not find gender-based differences.

"Gender inequality is not that strong when it comes to remote work," Möhring says, nevertheless pointing out that "mothers who work from home are mostly reducing their working hours now."

Even though this study was specific to the German labor market, its promoters believe that the implications could apply to similar economies.

In Spain, one of the countries the pandemic has hit the hardest, a recent study identified a positive correlation between wage distribution and the possibility of working from home. Better-paid positions are less vulnerable to distancing policies, which have already cost millions of jobs.

This relationship exists in all European countries, according to Juan Cesar Palomino, a professor at the University of Oxford and one of the authors of the study. Without government action, these differences would increase inequality, he told DW.

"It is a social gap that involves the salary one earns but also the resilience of different jobs to shocks," he says, adding that not only are workers unequally protected from the virus, but their jobs show uneven adaptability and resistance in the face of a crisis such as the current one. 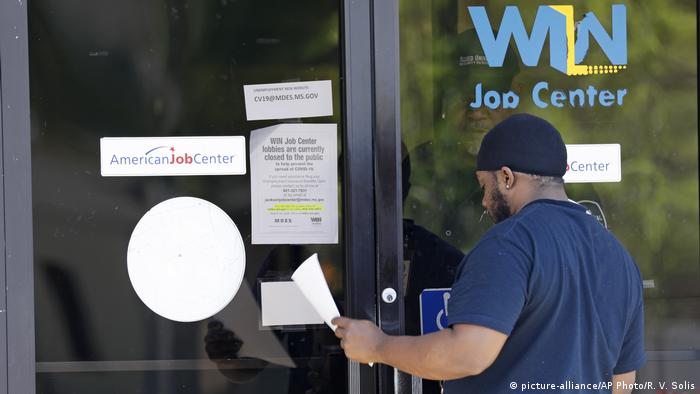 More than 40 million Americans have lost their jobs in the past few weeks, many of them in heavily impacted sectors such as the leisure and hospitality industries. Working from home is no option for them

Similarly, the Washington-based Economic Policy Institute underlined that less than 30% of US workers can actually work from home, a statistic that differs enormously by race and ethnicity.

Hispanics and Latinos in the country are the group least likely to be able to work from home — only 16% can — while Asian-Americans have the highest proportion of remote work (37%), followed by whites (29.9%). Black Americans are the group with the second lowest remote-work rate (19.7%).

"Everyone is saying we are all working from home and then you have all those invisible workers who just can't," Elise Gould, a senior economist at the Economic Policy Institute, told DW. "COVID-19 magnifies the growth of inequality that we have experienced in this country in the past 40 years."

As countries move to a 'new normal' where social distancing measures will partly remain in order to prevent future COVID-19 waves, analysts worry these inequalities could also become a new normal.

"If this health risk continues to be the main threat to our societies, as long as there is no vaccine, or in case of other pandemics, it might lead to a permanent increase of these inequalities," says Elias Naumann, a visiting scholar at Harvard University.

"We need to discuss the long-term consequences of moving towards more remote work, not only in terms of health and inequalities, but also its social and political consequences," he told DW.

Naumann thinks the longer this inequality persists, the more pervasive its consequences might become — a view shared by Palomino.

"If these people do not only lose their jobs, but in the long run they cannot afford their accommodation anymore or sending their children to university, the effect amplifies," he argues, and demands that society's goal should be to prevent a temporary loss of income from hobbling certain groups in the future.

Experts agree that businesses should do more to make telecommuting a real option for employees — and find ways, in cases where it is not feasible, to protect workers from the virus and economic precariousness. Naumann explains that could include "making sure that if you're feeling sick you don't have to go to work for financial reasons."

There's a lot governments can do as well. "We need a better safety net in general," says Gould, as she points out that the US is "behind the times" in terms of social policy and basic labor protections. A "well-working" healthcare system is also essential, Naumann adds, meaning one in which medical attention does not remain "a privilege."

Spanish researcher Palomino, whose country has one of the lowest telework rates in the EU, believes investment in education is essential, since "access to remote work is often rooted there." In addition, he calls on policymakers "to allocate resources spatially" in order to prevent inequalities in opportunities from growing.

But how can governments pay for all of that? Palomino would like to see proportional financial contributions to fight growing inequalities:

"The fair thing to do is for those who have had the privilege to keep their jobs, or those companies that have increased their earnings, to pay more." If not everyone can have an office of one's own, then economic justice might also mean taxing that privilege.

Pharmaceutical giants "tragically failed to rise to the challenge" of the coronavirus pandemic, according to Amnesty International. DW has the latest.

The coronavirus pandemic has also become an inequality pandemic. Never before has the world seen such a simultaneous increase in the gulf between the haves and the have-nots.