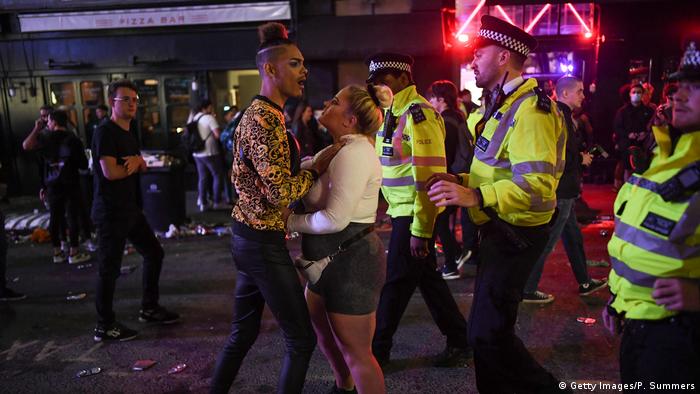 Revelers who packed central London pubs made it "crystal clear" that drunk people cannot socially distance in the wake of England's bars and restaurants reopening, the head of the country's police federation said on Sunday.

The hospitality sector was told it could reopen after a three-month hiatus due to the coronavirus pandemic, on condition that customers were seated and social distancing measures adhered to.

However, the decision to pick Saturday as a reopening day has been called into question.

Suggestions that a less-busy day, such as a Monday, would have been more appropriate were rebuffed by Prime Minister Boris Johnson on Friday. He said it didn't matter which day of the week the doors of England's pubs were flung open.

However, the head of the Police Federation of England and Wales said he had to deal with "naked men, happy drunks, angry drunks, fights and more angry drunks" while on shift on Saturday.

He said his own police department in the southern city of Southampton "managed to cope" but that "other areas had issues with officers being assaulted."

In many parts of the country, people appeared to abide by the rules but in others there were scenes reminiscent of New Year's Eve, with streets packed with boisterous people, enjoying the nightlife, raising fears that keeping a curb on the contagion could prove difficult.

But Health Secretary Matt Hancock said the vast majority of people did "the right thing'' and followed the distancing rules to stay at least one meter (over three feet) apart from members of another household.

"It was really good to see people out and about and largely, very largely social distancing," he told Sky News.

The UK has witnessed the deadliest coronavirus outbreak in Europe and the return of large crowds in many city centers fueled concerns of a resurgence in infections.

People have been urged to stay away from British beaches as thousands flocked to the Dorset coast and a major incident was declared in the town of Bournemouth. The UK is experiencing its hottest day of the year so far. (25.06.2020)

The UK prime minister wants those who can't work from home to return to work and also says that from June 1, shops and schools could reopen. His government has been criticized amid suggestions it is too much, too soon. (11.05.2020)

An intense round of post-Brexit negotiations ended early in Brussels with European Commission chief Barnier citing "serious divergences" between the two sides. A new round begins next week in London.  (02.07.2020)