The UK prime minister wants those who can't work from home to return to work and also says that from June 1, shops and schools could reopen. His government has been criticized amid suggestions it is too much, too soon. 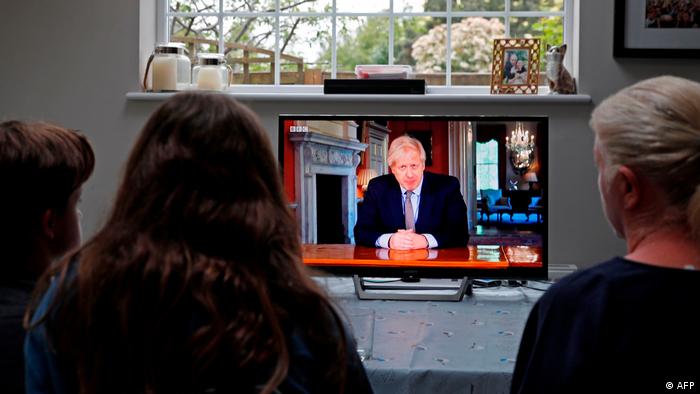 British Prime Minister Boris Johnson said on Sunday that the lockdown introduced in March has prevented the loss of half a million lives as he hoped to gradually relax the restrictive measures in the coming weeks.

Johnson made the claim in a televised address to the nation. He also announced the upcoming plans as the UK seeks a way out of the current crisis.

The prime minister said people in Britain who can't work from home, such as those in construction or manufacturing jobs, "should be actively encouraged to go to work” this week.

"We will be monitoring the progress we are making. We may be able to go further. On June 1 we may be in a position to begin the phased reopening of shops and to get primary pupils back into schools,” Johnson said in his address.

"At the earliest by July, and subject to all these conditions and further scientific advice, we will hope to reopen at least some of the hospitality industry, and other public places, provided they're safe and enforce social distancing.”

From Wednesday, there will be no restrictive measures applied to the amount of exercise that can be done outdoors, Johnson announced. Citizens will also be permitted to sunbathe, drive to other destinations, and play sports with members of their own household.

Opposition leader Sir Keir Starmer was critical of Johnson's new approach, saying it "raises more questions than it answers” and that his speech was "effectively telling millions of people to go back to work without a clear plan for safety.”

Read more: Lessons learned — The eradication of smallpox 40 years ago

Meanwhile, a statistics expert repeatedly cited by the UK government when responding to criticism of its failings amid the coronavirus pandemic, has himself criticized Downing Street's ineffective communications, saying it shows a lack of "respect” for the British public.

David Spiegelhalter, a professor at Cambridge University, said Westminster's daily briefings were like a "number theater" put together by a public relations team rather than giving citizens crucial information.

"I just wish the data was being presented by people who know its strengths and limitations and could treat the audience with respect," he told the BBC.

Heiko Maas voiced his concern amid floundering trade talks between the EU and UK. The two sides have also not agreed on whether to extend the negotiation period, if an agreement is not made by the end of the year.  (09.05.2020)

UK and US kick off trade deal negotiations

British and American officials began two-weeks of talks on a trade deal of symbolic and political importance for both nations. But agriculture remains a thorny issue, with the UK opposed to weak US standards. (05.05.2020)