Charged with shielding society’s most vulnerable, British care homes are vital to the nation’s coronavirus battle. But understaffed and poorly equipped, this often forgotten frontline is approaching breaking point. 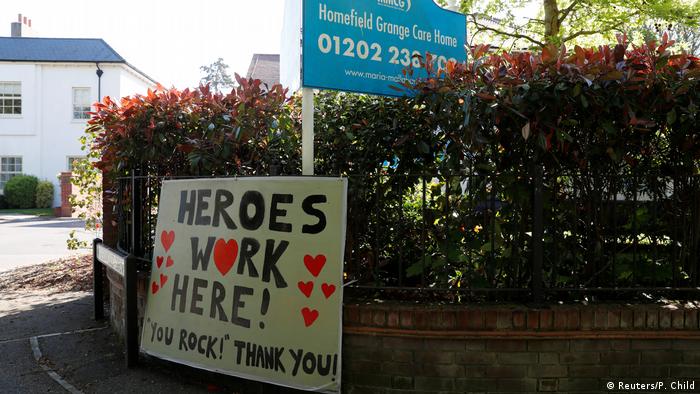 How best to describe his employees' mood last week? Mike Padgham, who runs a number of care homes in Yorkshire, doesn't know. After a lengthy pause, he finds the word: "solemn."

The specter of COVID-19 had suddenly materialized, killing three of his care home residents in quick succession. To his staff, they were "part of the family." But there's been little time to mourn.

Five weeks into the lockdown, Britain's care homes have become a critical front in the coronavirus fight. More than any other demographic group, COVID-19 threatens the elderly and infirm, 410,000 of whom reside in sheltered accommodation. Weakened by age and underlying illnesses, their vulnerability to the virus is universally acknowledged.

And yet, the contagion's toll on British pensioners is fiercely debated. In the week to April 10, care homes lost 1,000 residents to coronavirus, official statistics report. Sector groups, however, believe the true figure to be far higher. Counting the fatalities of individuals suspected of having COVID-19 — in addition to confirmed sufferers — the number is nearer 4,000, says the National Care Forum (NCF).

There's less division on the availability of testing, something carers have been calling for since the virus's onset. With family visits banned, a home's greatest risk of infection is from its own staff, making the ability to test vital. Acknowledging this, the UK government has promised to ramp up its screening program — but progress has been infuriatingly slow. A week on from the pledge, NCF data revealed that just 25% of eligible care workers had been tested.

On the frontline without protection 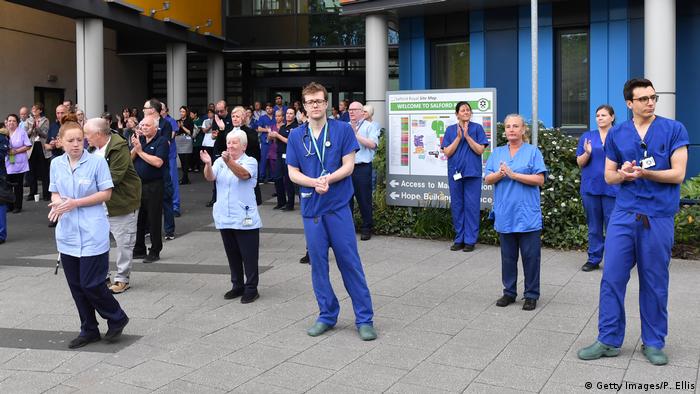 A scarcity of personal protective equipment (PPE) has carers equally incandescent. As the crisis took hold, scant supplies of masks, gloves, and aprons were snapped up by Britain's beleaguered National Health Service (NHS), say senior figures in the care industry.

"Currently we're having to source it and pay extortionate prices… what happened is at the very beginning the PPE was requisitioned for the NHS, creating a supply and demand scenario," said Nadra Ahmed, chairman of the National Care Association(NCA).

So pressing is the need for equipment, some care homes have resorted to producing their own. Fashioning protective overalls from old sheets and curtains, residents of Coxbench Hall in Derbyshire have been helping supply the home's under-resourced staff.

"We were going round and round in circles the last couple of weeks just trying to find somewhere which was actually meant to be giving us PPE," said Sarah Ballin, a director at the facility. "It's not filtering through to the suppliers, which means we can't buy it," she added.

Her residents have taken to their task with enthusiasm, and are generally in good spirits. Morale among the staff also remains high, though, as Ballin puts it, "we've got some very, very scared bunnies." 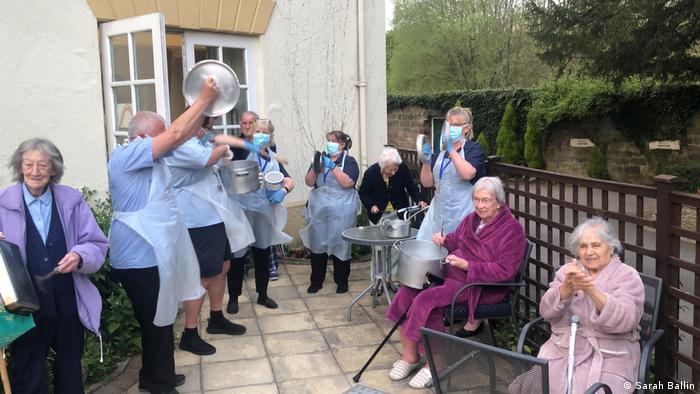 She's not alone. Across the country, care workers carrying the emotional weight of dealing with the crisis are having to stoically soldier on, says Ahmed of the NCA. "The anguish is phenomenal, and yet they're smiling through the day to make sure the people that they care for don't notice."

Putting on a brave face

Even before the pandemic, the sector was under severe strain. Care jobs are demanding but low paid, and staff shortages are endemic. Employees' sick pay provision tends to be lacking also, an issue of particular significance at the moment. Despite showing symptoms of COVID-19, some staff have continued to work, anecdotal evidence suggests, putting at risk entire homes.

In that regard, Mike Padgham has been lucky: while the virus has struck down a number of his workers, all have been careful to self-isolate. Though sensible from a containment point of view, this has had a knock on effect for his other staff, who are having to work longer hours to pick up the slack. In honor of their effort, Padgham has issued a pay rise.

However, this sort of recognition hasn't always carried to the wider public. Horror stories of care workers being spat at, assaulted, and branded "carriers of death" have made UK headlines.

And then there are the tragic accounts of staff fatalities. Catherine Sweeney — a care worker in Scotland — is one of dozens to die while carrying out her duties. She had "dedicated over 20 years of her life [to care work], unfailingly serving the needs of the most vulnerable in society," read a family statement.

Whether the toll endured by care staff will see meaningful changes to the sector isn't yet clear. Funding is the single biggest issue facing managers — a structural problem that would require root-and-branch reform. In the short-term, care homes — like all businesses — must simply brace for the economic battering expected post-pandemic.

"Smaller providers will start to fold, because they won't be able to meet their financial commitments," said Ahmed. "That means the NHS and local authorities will have the problem of rehousing people."

And above all else, a change in attitude is needed at the top, says Padgham.

Years of underfunding catch up with UK healthcare system