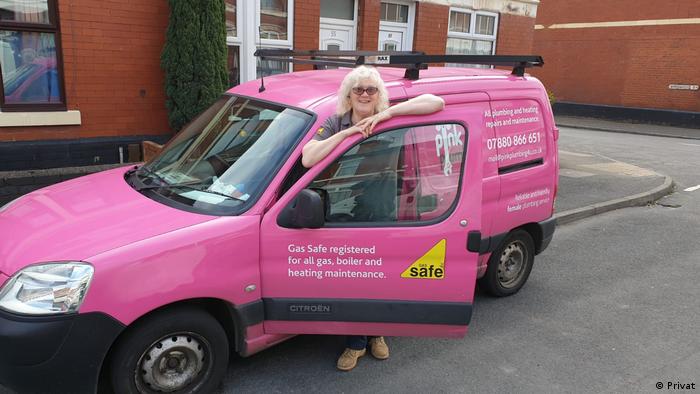 Under normal circumstances, Philippa Cunningham can be seen darting around the central English city of Derby as she flits between plumbing jobs. She's easy to spot because her van is bright pink with "Pink Plumbing" plastered on the side. However, in the past few weeks that sight has become less frequent.

"People are really, really afraid to have you in their house," says Cunningham, explaining why so many customers have postponed work. "I've not lost the work, but it's not there until all this madness is finally over."

The madness she's talking about is the COVID-19 outbreak, which has resulted in Brits being advised to keep contact with others to a minimum.

It's not just Cunningham's customers who are trying to keep their distance; many tradespeople she'd normally collaborate with are also isolating themselves. "There's no point in me starting a bathroom if I can't finish it!" she points out.

A promise of help

The UK government has assured self-employed British workers that help is on the way. In late March, it announced a scheme to pay many of them 80% of their average monthly earnings, up to a limit of 2,500 pounds (€2,800, $3,036).

The plan is expected to cost the UK Treasury around 3 billion pounds per month and should help around 3.8 million self-employed workers. However, they've been told not to expect the money until June.

For Cunningham, that money is too far off to be reassuring. "I've got three months to try and keep myself afloat. I've still got all my insurances and mortgage to pay," she says.

The sense among Britain's self-employed of being put on hold was made worse by the fact the government's announcement came almost a week after measures to protect other workers were set out. "I think we were forgotten about," says Cunningham. The government tried to explain the delay, saying the system had been particularly difficult to design.

Some 150 kilometers (93 miles) away from Cunningham, in the southwestern city of Gloucester, pub landlord Peter Sheehy is getting to grips with what coronavirus means for him.

His establishment, The Turks Head Inn, is what's known as a "micropub." They often consist of an old shop, converted into a small version of the traditional British alehouse. The Turks was once a tailor's shop.

"We sell 30 different ciders at any one time and six ales," Sheehy proudly tells me. Except now, they're not selling any. He and his wife, Christine, have had to close temporarily after the UK government ordered all pubs to shut. 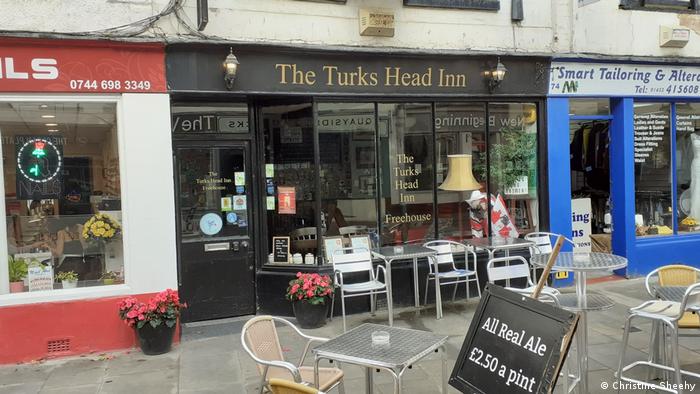 The Turks Head Inn in Gloucester, England has closed during the pandemic

"The last weekend [before the closure] was pretty amazing. Being English, everyone was trying to get enough beer in them to last as long as the coronavirus did. So it was a bit messy." Sheehy says he and the locals all but drank the pumps dry.

Now there's little that he, Christine and their four part-time bar staff can do at The Turks until they're told they can reopen. However, Sheehy seems a lot more comfortable with the situation than Cunningham in Derby.

"The government are giving grants out. They're giving us 10,000 pounds for the first three months. So that's very handy." Sheehy also isn't concerned about losing trade in the long-run. "All our competitors are closed as well, so we don't have to worry about them sneaking up on us."

Money on the way

For small businesses like The Turks Head Inn, the situation is different to that of sole traders like many plumbers. The help for them was announced a little sooner by the government as part of a large package of measures.

Sheehy's business is benefiting from a government program that will see cash grants go to firms in the retail, hospitality and leisure sectors in England. He's hoping to have that money in a matter of days.

The UK government has also introduced the Coronavirus Business Interruption Loan Scheme (CBILS), through which small and medium-sized companies are supposed to get easy access to emergency finance. Under the arrangement, the government will pay the interest for the first year and guarantee 80% of the loan amount to lenders.

However, there was a stark warning this week that CBILS would not be enough to rescue smaller firms. The Corporate Finance Network, an advisory group, published research suggesting 18% of SMEs will not be able to survive the next four weeks.

Months of struggle lie ahead for many of Britain's smallest operators. For charismatic "Pink Plumber" Philippa Cunningham, staying optimistic is key to survival.

"I am going to remain upbeat. Speak to me in six months and I will still be upbeat whatever is happening."

But both she and Peter Sheehy are looking forward to an end to the lockdown, when the pipes can be repaired and the beer can begin to flow.

Pubs and restaurants have reopened for the first time in months as England eases another round of public health regulations.

The country was a model for using shutdowns to keep the pandemic under control — but Ireland is now also a case study for how temporary relaxations can cause devastating problems. Gavan Reilly reports from Dublin.

South Korea's prime minister has asked people to not "panic" as the country sees a record high in daily COVID-19 infections. Meanwhile, Hong Kong will test its entire population in March. DW has the latest.