UK and US kick off trade deal negotiations 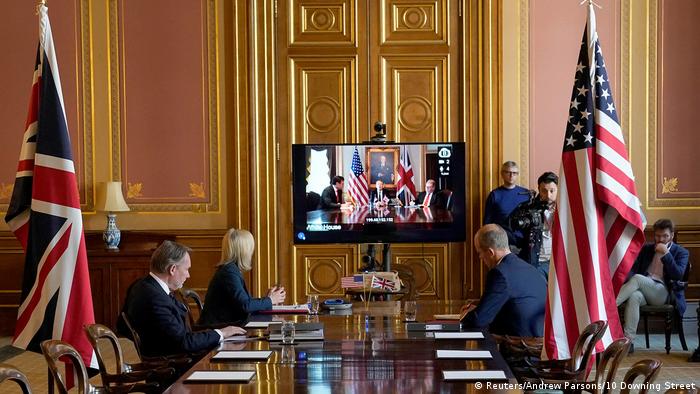 UK and US trade negotiators started official talks on a future trade deal on Tuesday.

British International Trade Secretary Liz Truss and US Trade Representative Robert Lighthizer held a video conference call that kicked off a two-week round of bilateral negotiations, involving some 100 officials.

Both nations said in a statement that a trans-Atlantic free trade agreement would ''contribute to the long-term health of our economies, which is vitally important as we recover from the challenges posed by COVID-19.''

They have promised to work at ''an accelerated pace'' to strike a deal.

The restart of talks comes as the UK must negotiate a trade agreement with the EU, following Brexit, and in the midst of a pandemic that threatens to upend the global economy.

Trade in goods between the US and the UK was valued at $127.1 billion (€117.2 billion) in 2018. Britain is the seventh-largest U.S. goods trading partner, after South Korea, according to the US Census Bureau.

For the British government, clinching a trade deal with the US carries symbolic and political importance in the wake of Brexit, even as the country stands to gain modest economic benefits from it.

In March, the UK said that eliminating tariffs on trans-Atlantic trade in goods would increase the size of its economy by only 0.16% over the next 15 years.

For the Trump administration, the trade deal offers an opportunity to shift supply chains back to the US and away from China. It is part of its "Buy American" campaign for US-made goods.

Republican Senator Chuck Grassley of Iowa said had high hopes for the trade deal and that it would send a strong message to the EU.

"All I'm hoping to do is if we get a good deal with the UK on agriculture, it's going to embarrass Europe," Grassley told reporters on a conference call.

But agriculture is expected to be one the most difficult topics in the bilateral talks. At issue is strong British opposition to genetically modified crops and antibacterial treatments for poultry from the US.

Critics of Prime Minister Boris Johnson's government say that a deal with Washington will lead to accepting looser US food and environmental standards.

The British government has denied this claim. Johnson has vowed to drive a "hard bargain" and UK International Trade Secretary Liz Truss has pledged that Britain would not diminish its food safety standards for the sake of a deal.

The EU is prepared to play ball on a "unique" trade deal with the UK, the European Commission president has said. But she stressed that any deal comes with "obligations from both sides." (11.02.2020)

The new deal is set to replace the North American Free Trade Agreement, which US President Donald Trump claimed was unfair. It will come into force on July 1. (25.04.2020)