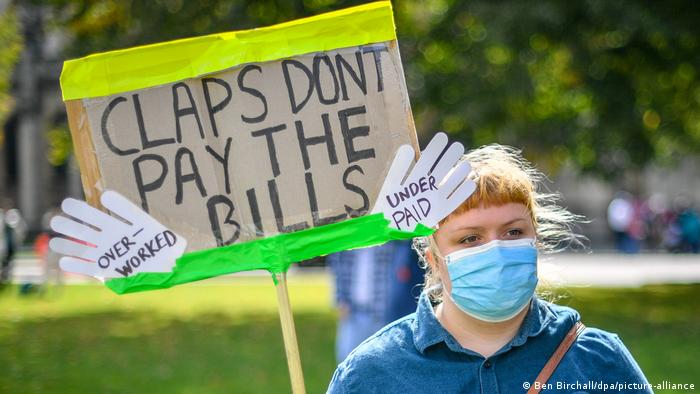 The global death toll from COVID-19 could reach 2 million before a vaccine is readily available, and could be even higher without strenuous efforts to prevent the spread of the novel virus, the World Health Organization (WHO) has said.

"Unless we do it [take concerted action] ... [2 million deaths] is not only imaginable but sadly very likely," Mike Ryan, head of the UN agency's emergencies program, said in a briefing.

This figure would see the world's death toll doubling from the current 1 million confirmed fatalities from COVID-19 since the virus first emerged in China in late December.

Authorities in Madrid on Friday announced expanded partial lockdowns in the Spanish capital, with restrictions now in place in 45 neighborhoods covering more than 1 million people.

Residents will be required to stay in their neighborhoods unless they have to go to work, to school or to the doctor. Bars, restaurants and businesses will remain open at reduced capacity.

In the United Kingdom, local lockdowns are being imposed in several cities where COVID-19 infections have risen sharply.

Thousands protested coronavirus restrictions in London's Trafalgar Square, with groups of protesters clashing with the police who attempted to break up the rally.

Police said they intervened because the participants refused to comply with anti-pandemic rules including social distancing. At least 10 people have been arrested. 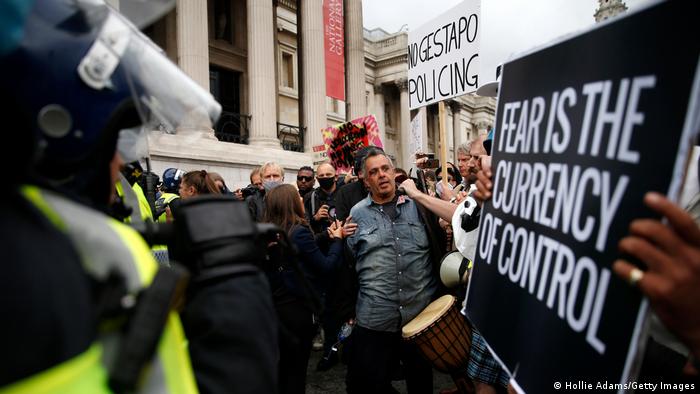 In the city of Leeds in northern England, authorities said people would be prohibited from meeting members of other households indoors or in backyards, in a measure that affects over 750,000 people.

In Cardiff, Swansea and Llanelli in Wales, people from different households have also been banned from meeting indoors.

Graham Medley, a professor of infectious disease modeling, said Saturday he was worried the country was acting too slowly to prevent a sharp resurgence of the virus.

The UK reported its highest number of COVID-19 infections in a single day on Thursday, with more than 6,600 infections.

Read more: Column: How a staycation changed my view of Germany

In view of the rising number of infections in Berlin, the German capital is once again considering imposing new restrictions.

Dilek Kalayci, Berlin's state minister for health, told local media outlet RBB it is possible that in future a maximum of five people or people from just two households may meet.

Meanwhile, around 50,000 German students are currently in quarantine, a survey by Bild found on Saturday. The newspaper retrieved the data from education ministries in the 16 states.

The head of the German Teachers' Association has warned that the number of infections among students will likely double over the next three months, and probably even multiply. As a result, it will "become more and more difficult to control and contain outbreaks of infection," Heinz-Peter Meidinger told Bild.

Late Friday, Germany's Foreign Ministry added three additional regions — including popular Alpine holiday destination Tirol in Austria — to its list of places deemed high-risk areas. The entirety of the Czech Republic and Luxembourg were also added to the list.

German airline Lufthansa is expecting the German government to approve rapid COVID-19 testing at airports for Lufthansa flights to the US, the airline's CEO Carsten Spohr told an aviation industry conference.

Passengers would be tested before boarding and would receive results in minutes. Spohr said the tests are necessary to open up important trans-Atlantic routes.

He added the first flights with quick-tested passengers could take off this year, and a test-based network of trans-Atlantic flights would be in place by the second quarter of 2021. Like most in the aviation sector, Lufthansa's business has suffered during the pandemic.

Iran is poised to impose a series of one-week lockdowns in worst-hit regions to stop the disease from spreading further, President Hassan Rouhani said on Saturday.

Steeper fines are also being planned for those who choose not to wear face masks, Rouhani wrote on his website after a meeting with the health crisis committee.

The Health Ministry said the country has been seeing about 200 deaths and 3,500 new infections a day of late. Iran, a country of 82 million, has seen 25,000 deaths and about 440,000 cases since the outbreak first began.

Strict nationwide lockdown measures have gone into effect in Israel, although lawmakers are bitterly divided over approving legal measures enforcing synagogue closures during the Jewish High Holidays and restrictions on public demonstrations.

The government has also ordered all nonessential businesses to close and for people to not venture more than 1,000 meters from their homes until at least October 10.

Per capita, Israel currently has one of the most severe COVID-19 outbreaks in the world, with around 7,000 new cases a day among its population of 9 million.

The UN's humanitarian coordinator said the consequences of coronavirus are deadlier in Yemen than almost anywhere else in the world, due to the compounding factor of war, famine, cholera and shattered public infrastructure.

"At the height of the first wave, we estimate that the case mortality rate reached nearly 30%, one of the highest in the world," Lise Grande, the UN humanitarian coordinator in Yemen, told Germany's dpa news agency.

China has hit back at the United States over its constant criticism of Beijing's handling of the coronavirus outbreak.

US President Donald Trump used his annual address to the UN General Assembly this week to attack China's record, while the US ambassador to the UN also took an outraged tone, prompting Chinese envoy Zhang Jun to tell the Security Council: "I must say, enough is enough! You have created enough troubles for the world already."

"The US has nearly 7 million confirmed cases and over 200,000 deaths. With the most advanced medical technologies and system in the world, why has the US turned out to have the most confirmed cases and fatalities?" he asked in English. "If someone should be held accountable, it should be a few US politicians themselves."

Indonesia has reported its biggest daily rise of coronavirus infections for a third consecutive day, with its capital, Jakarta, becoming the epicenter of the new outbreak.

California is experiencing upticks in coronavirus cases. The state health secretary, Mark Ghaly, has said there have been increases in infections, hospital emergency department visits and new hospitalizations for confirmed or suspected cases of COVID-19.

Ghaly said the spike appears largely due to the Labor Day holiday earlier this month, and could lead to an 89% surge in hospitalizations over the course of the next month.

The government in Costa Rica has signed up for the WHO's COVAX vaccine program to be able to pre-order more than 1 million doses of its inoculations once they become available. The figure represents a fifth of Costa Rica's population.

The health minister of the Australian state of Victoria has quit over the fallout from an inquiry into why security guards were used instead of police or the military at quarantine hotels for visitors and returning Australians. Jenny Mikakos' resignation follows six weeks of hearings into the fiasco.

Lapses in security at the hotels were given as the major reason for a second wave of COVID-19 cases in the state, unlike elsewhere in Australia.

The state's largest city, Melbourne, which has been in lockdown for more than a month, is preparing to ease restrictions on Monday.

Authorities are expected to allow a staged return to school for some students and outdoor gatherings of five people from two households.

Three German nationals were detained in New Zealand for breaking the island country's anti-coronavirus restrictions, according to The New Zealand Herald daily. The Germans sailed their 16-meter (52-foot) yacht to the port of Opua despite being denied entry.

A spokeswoman for the New Zealand Health Ministry said the crew applied for exemption on humanitarian grounds and asked to repair the ship. However, the ministry said their circumstances "did not rise to the threshold of a compelling humanitarian need."

All three crew members have tested negative for the virus. New Zealand officials were arranging to send them home on the first available flight. Their yacht is liable for seizure, according to the country's customs department.