The WHO is looking into a new variant of COVID-19 named mu and has classified it as a variant of interest. Meanwhile, Australia's Victoria is seeing a surge in cases of local transmission. Follow DW for the latest. 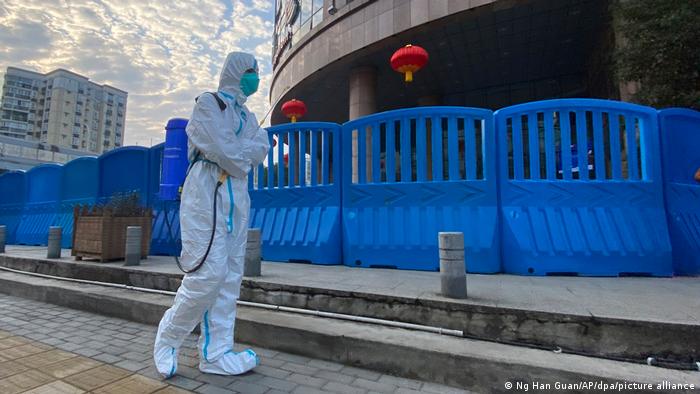 The World Health Organization said it was monitoring a new variant of the coronavirus named mu, the 12th letter of the Greek alphabet.

Mu is scientifically known as B.1.621 and has been classified as a "variant of interest," the WHO said in its weekly pandemic bulletin on Tuesday.

The global health body said the variant has mutations that show a risk of resistance to COVID-19 vaccines, emphasizing that further studies were required to understand it better.

Since its detection, mu has been reported in South American countries and in Europe.

South Korea on Wednesday said it had secured 1.5 million doses of BioNTech-Pfizer and Moderna's COVID-19 jabs from Romania.

What's behind the surge in coronavirus infections in South Korea?

Meanwhile, Japan's Kanagawa prefecture said it has found another vial of Moderna's COVID-19 vaccine thought to contain a foreign substance.

The prefecture said a pharmacist found several black particles in a vial during a check for foreign substances before the vaccine's use.

The prefecture said it has put the rest of the lot on hold.

Last week, Japan had suspended the use of 1.63 million doses of Moderna vaccines after being informed of contamination in some of the supplied doses.

Moderna and Spanish pharmaceutical company Rovi — which bottles Moderna shots — have said the cause could be a manufacturing issue.

Moderna also said no safety or efficacy issues had been identified as a result of the issue.

Only Malta, Denmark and Belgium have a higher proportion of their residents vaccinated, according to the latest statistics.

Germany on Wednesday reported 13,531 new cases of the coronavirus, according to data published by the Robert Koch Institute (RKI) for infectious diseases. The seven-day incidence rate rose to 75.7 from 74.8 the previous day.

In the Australian state of Victoria, there has been a spike in new, locally acquired cases even as the government prepares to extend a strict lockdown. The state on Wednesday recorded 120 new local cases of COVID-19 infection, against 76 a day earlier.

Victoria was put under lockdown soon after the first case was found early in August. The measures were due to come to an end on Thursday, but the caseload has risen steadily over the last four weeks.

In the United States, the state of Idaho has activated the National Guard to help with the surging coronavirus caseload.

Idaho Governor Brad Little made the announcement on Tuesday, adding that he had directed up to 370 additional people to assist hospitals overwhelmed with unvaccinated COVID-19 patients in the state.

There were only four intensive care unit beds vacant in the entire state on Tuesday out of a total of 400 beds, Little said in his statement.

Authorities were tipped off by several egregious errors, including the misspelling of "Moderna" as "Maderna" instead. She was charged with two misdemeanors for violating the state of Hawaii's emergency laws, including evading a mandatory 10-day traveler quarantine.

Latin America and the Caribbean need more vaccines and are setting up a platform to produce jabs in the region, Pan American Health Organization Director Carissa Etienne said on Wednesday.