The Pan American Health Organisation launched a new platform to try to manufacture vaccines in the region as opposed to importing them. Its director also called for more donations. 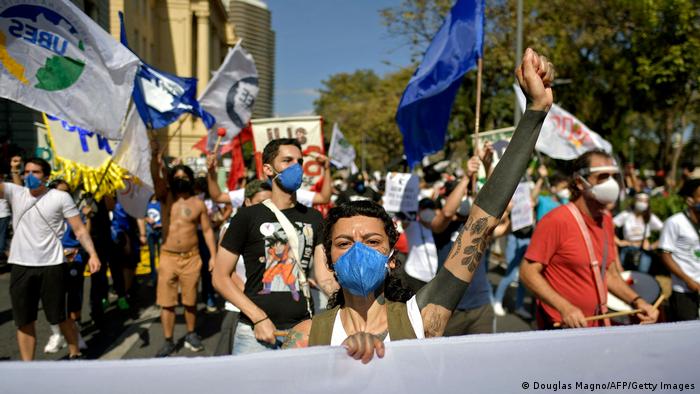 Latin America's most populous country Brazil has been particularly hard hit, with protests against the government's handling of the pandemic

Less than a quarter of Latin Americans and Caribbeans have been vaccinated against COVID-19, the Pan American Health Organization (PAHO) said on Wednesday.

PAHO Director Carissa Etienne launched a new platform to help produce vaccines in Latin America after she contrasted the figures with the US and Canada's abundance of doses.

What did Etienne say?

Etienne said that with a large proportion of the pandemic victims in the region, "we need more vaccine donations," during a visit to Washington.

Chile and Uruguay are the only Latin American countries to have vaccinated over 60% of their populations. Across Latin America, Etienne said that an average of 23% of adults had been vaccinated, but with far lower rates in several countries.

In the northern PAHO members, Canada is also past the 60% hurdle with the US having vaccinated just over half its population.

Etienne said the Americas as a whole needed an extra 540 million doses to ensure that every country has at least 60% of its population vaccinated.

"The best way to protect against variants of concern, like the Delta variant, is to ensure more people are fully vaccinated everywhere," Etienne said.

How does PAHO expect to get there?

The PAHO, a regional subsidiary of the WHO, launched a new regional platform to advance the manufacturing of COVID-19 vaccines and other health technologies in the Americas.

Etienne said the initiative would "coordinate across sectors – health, science and technology and industry - to strengthen their capacity to produce new technologies."

"Limited [global] production and unequal distribution of vaccines in the face of staggering demand hinder our COVID response," she said.

Governments, financial institutions and public health agencies have backed effort to produce vaccines across Latin America rather than import them from abroad.

Etienne said she wanted to "break the cycle of dependency on a highly concentrated global vaccine market" through "coordination, collaboration, investment, and solidarity."