Almost 20,000 people took to the streets to vent their anger over the decision to require vaccinations for health workers. Thailand has reported its highest ever daily death toll. Follow DW for the latest COVID news. 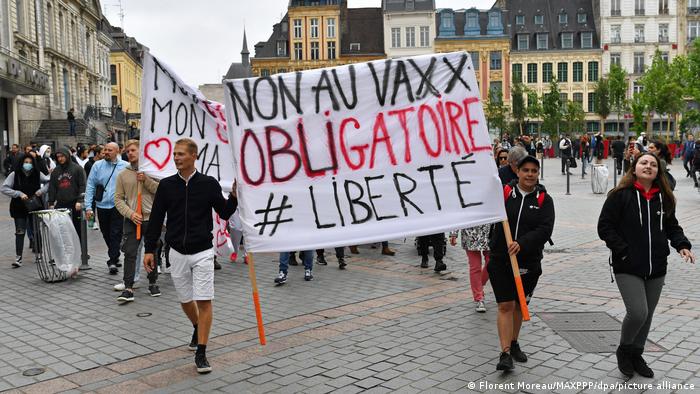 New restrictions have not gone down well with some in France.

Some of the protests began in the morning in the French capital as the annual Bastille Day parade got underway, with President Emmanuel Macron in attendance.

The protesters are unhappy at the government's decision, announced Monday, to require health workers to get vaccinated and bring in a vaccine pass for access to most public places.

People who have not been vaccinated would require a negative coronavirus test result to enter restaurants.

Since the announcement, a record number of French people have booked appointments to get inoculated against the virus that has killed at least 4 million people around the world.

What are the consequences of not knowing?

COVID-19 Special: What are the consequences of not knowing?

The Kremlin on Thursday said that Moscow has no immediate plans to allow foreign vaccines in the country despite slow vaccination rates and rising death toll.

Kremlin spokesman Dmitry Peskov said they are not currently discussing the “mutual recognition” with the Belgium government.

Russia is inoculating its people with the Sputnik V and Sinovac vaccine which is not recognized by the EU, with only 20% of Russians having received at least one jab.

Latvia has decided to make vaccinations compulsory, as of October, for health and education workers. In other sectors, employers will have the right to dismiss unvaccinated workers, according to the changes agreed by the government on Wednesday. Parliament still has to approve the new rules.

Tokyo on Thursday reported 1,300 new COVID cases, its highest single-day count since January. The uptick comes a week before the Olympic opening ceremony on July 23.

Health and sports officials at Hamamatsu city, west of Tokyo, said the screenings were done before the judo delegation of around 30 members arrived there on Saturday. They said none of the infected individuals came in contact with the athletes.

A new law covering nearly two dozen cities and counties in China is threatening to ban people from public places unless they are vaccinated. This includes schools, hospitals and shopping malls.

The tough new rules come after the rise of the highly contagious Delta variant across Asia.

Thailand registered on Thursday a daily record of 98 coronavirus deaths, taking total fatalities to 3,032 since the pandemic began.

South Korea reported 1,600 new infections on Thursday, a slight drop from the record number the previous day, as it struggles to contain an outbreak onboard a military anti-piracy vessel operating overseas.

The country tightened social distancing rules across most of the country on Wednesday as outbreaks, which had previously been largely centered in Seoul and the surrounding areas, have now spread to non-metropolitan areas.

Singapore reported its highest number of local infections in 10 months on Wednesday, after the discovery of a cluster among hostesses and customers of KTV karaoke lounges.

Of the 56 new community infections, 42 were linked to the karaoke lounges, the health ministry said.

Police launched an investigation into three karaoke bars in response, with authorities saying they had arrested 20 women.

Cases in Sydney are easing, as the city endures an extended lockdown to quell an outbreak of the highly contagious delta variant.

New South Wales state Premier Gladys Berejiklian said cases would need to drop significantly for Australia's largest city to emerge from the lockdown as 28 out of the 65 new infections reported were people who were infectious while still active in the community.

The restrictions mark the fifth lockdown in Victoria's capital, Melbourne, since the pandemic started.

Haiti has received its first 500,000 doses of vaccines, donated by the US government through the COVAX scheme, the UNICEF regional director for Latin America and the Caribbean said in a statement.

Haiti was the only country in the Americas without a single dose of vaccines before the arrival of this batch, the statement said.

Rwanda's capital Kigali and eight other districts will be placed under lockdown starting Saturday and until July 26.

"Citizens are urged to significantly reduce social interactions and limit movements only to essential services," Prime Minister Edouard Ngirente said in a statement.

According to the statement cited by AFP news agency, most public and private offices and schools were ordered closed. Outdoor sports and recreational activities were also banned.

Rwanda has avoided the worst of the pandemic thanks to its strict containment measures. A recent surge in cases prompted the government to lock down again.

Recent cases of COVID-19 in the women's ward of the Evin Prison in Tehran spotlight a lack of preventative measures and the precarious situation of political detainees in the country.

The financial crisis caused by the pandemic has left young graduates with limited job prospects. Experts say it could take years for the job market to make a full recovery.