The number of people testing positive in Munich is up despite a lack of crowds due to a scaled-down Oktoberfest. Bavarian State Premier Markus Söder made some suggestions for a coronavirus-appropriate Christmas market. 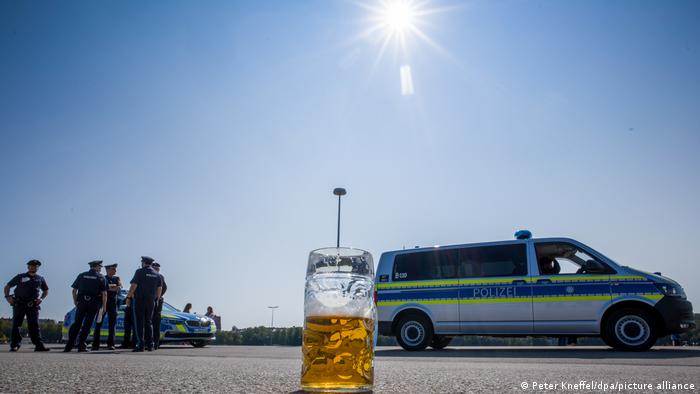 Germany: Thousands of people took to  the streets in the Germany city of Düsseldorf to protest against coronavirus measures. The Sunday rally was organized by a regional group of the Querdenken (Lateral Thinking) initiative that previously held major demonstrations in Berlin. The organizers hoped for at least 50,000 participants, though around 5,000 to 6,000 were counted on the day.

Authorities beefed up security in the northern city.

Counter-demonstrations were also be held in the city on Sunday, including one by a local initiative, Düsseldorf Blocks.

According to government rules, the participants did not have to wear masks but must keep a minimum social distance of 1.5 meters from one another.

Meanwhile, the infection rate has risen once again in Munich, despite the cancellation of the Oktoberfest. Some 55.6 people per 100,000 residents were infected over the past 7 days. Tougher measures are put in place when the figure rises above 50. Munich reported 78 new cases on Saturday.

Bavaria's state premier Markus Söder, who earned attention in German political circles for his robust initial response to the pandemic, has suggested that Christmas markets could still go ahead - under strict conditions.

Speaking to the Welt am Sonntag newspaper, Söder suggested that alcohol sales could be restricted, masks could be made mandatory, and one-way routes around the market could be implemented to minimize interaction.

Söder also used his interview to warn against undue complacency. "If the virus had been weakened in its effectiveness, then we could change the strategy fundamentally," he said. "But there is no scientific evidence for that."

Spain: Thousands of people demonstrated in Madrid on Sunday to protest a lockdown that is to begin in low-income areas of the city on Monday.

Protesters condemned the measures as discriminatory and carried posters saying "Our districts are not ghettos", "More doctors, more contact tracers - no segregation" and "You let us down and now you lock us up."

On Friday, President of the Madrid region Isabel Diaz Ayuso announced new lockdown measures affecting some 850,000 people, with infections at over 1,000 per 100,000 residents. For an initial two weeks, the areas in question can only be entered or left for urgent matters such as getting to work, attending school or visiting a doctor.

Meanwhile, Britain's Health Minister Matt Hancock said the country was at a tipping point on COVID-19, warning that a second national lockdown could be enforced if people don't follow government rules designed to contain the coronavirus spread.

Cases have risen sharply in recent weeks to more than 4,000 per day, with Prime Minister Boris Johnson calling it a "second wave."

"The nation faces a tipping point and we have a choice," Hancock told Sky News. "The choice is either that everybody follows the rules ... or we will have to take more measures."

Hancock said a second national lockdown was a possible option. "I don't rule it out, I don't want to see it," he told the BBC.

Russia: Authorities in Moscow have reported 6,148 new coronavirus cases on Sunday, the second straight day when the number exceeded 6,000. So far, Russia has recorded 1,103,339 COVID-19 cases.

According to the country's coronavirus crisis center, 79 people had died of the virus in the last 24 hours, bringing the total death toll to 19,418 as of Sunday.

South Korea: Authorities on Sunday extended COVID-19 social distancing measures for a week, limiting indoor social gatherings to below 50 people and outdoor to less than 100.

The government plans to further tighten rules for the Chuseok holiday, when people traditionally reunite with families. Social distancing policies for the September 30-Oct 2 holiday will be announced in the coming days.

Prime Minister Chung Sye-kyun said the level 2 restrictions need to be kept ahead of Chuseok as "cases with untraceable origins are steadily increasing and fewer tests being carried out on weekends means we should be on high alert."

The East Asian country registered 82 new coronavirus cases on Saturday, the lowest daily tally since mid-August, according to the Korea Centers for Disease Control and Prevention. As of Sunday, South Korea has recorded nearly 23,000 confirmed COVID-19 cases with 383 deaths.

India: The South Asian country's coronavirus infection tally crossed 5.4 million on Sunday, with another 92,605 new cases and 1,113 deaths reported on Saturday. As of Sunday, India has registered 86,752 virus-related deaths.

India is among the countries worst hit by the pandemic, behind only the United States.

On Sunday, the country's current lawmakers decided to cut short the current 14-day parliamentary session amid a worsening health crisis. At least 25 parliamentarians were found positive for COVID-19 during the mandatory testing before the opening of the session, according to NDTV news channel.

Indonesia: Cases have also spiked in Indonesia, which reported 3,989 new infections on Sunday, taking the total tally to 244,676.

United States: The Organization for Security and Co-operation in Europe (OSCE), which monitors elections in many parts of the world, says it will only send a small team to observe the US presidential election in November due to the pandemic.

The team will consist of just 14 analysts and 30 long-term observers; no short-term observers will be deployed for election day itself.

Brazil: A 3-ton monument was dedicated on Sunday at a cemetery where many of Rio de Janeiro's COVID-19 victims have been buried.

The Infinity Memorial, a 39-meter (128-foot) long ribbon of undulating steel, was erected to pay tribute to those who died from coronavirus and provide families with a symbol of their loss in one of the worst affected cities in Brazil.

Rio de Janeiro state reached more than 17,600 deaths and more than 250,000 confirmed cases of COVID-19 on Saturday, second only to Sao Paulo state in Brazil.