India's COVID-19 cases have risen to 4.2 million, surpassing Brazil. Meanwhile, Australia has announced it expects to receive its first batches of a potential vaccine in January. Follow DW for the latest pandemic news. 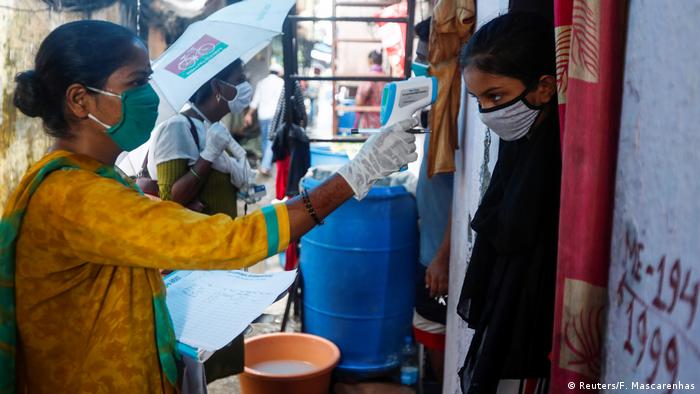 India: Coronavirus cases have surged to more than 4.2 million, bringing the country to the second-highest total in the world after the United States. The country's Health Ministry has reported 90,802 new cases, for a total of 4,204,614. Brazil, which has a reported 4.1 million cases, is now in third place.

The new figures come as urban metro trains partially resumed service in the capital, New Delhi, and other states, and as the government pushes to reopen businesses to revive a contracting economy. India has reported the world's highest daily caseload for nearly a month.

Australia expects to receive its first batches of a potential vaccine in January, after Prime Minister Scott Morrison's government struck a deal with CSL Ltd to manufacture two vaccines — one by AstraZeneca and Oxford University, and another in CSL's own labs with the University of Queensland. Australia has recorded more than 26,000 cases and a death toll of 762.

Germany: Industrial production increased for the third consecutive month in July, but the gain remained modest following bigger gains in the immediate aftermath of the initial shutdowns, according to the Economy Ministry.

Production rose 1.2% compared with the previous month, following gains of 7.4% in May and 9.3% in June. Production has also returned to nearly 90% of its level in last year's fourth quarter, prior to the pandemic, the ministry said.

Cocaine trafficking from South America to Europe has hit "record amounts" during the pandemic, Sascha Strupp, strategic analyst for drug trafficking at Europol, told the dpa news agency. He added that the narcotics trade is currently a "growing market."

The agency also believes that in the absence of regular air traffic, criminal gangs have resorted to hiding narcotics on cargo ships among merchandise such as medical equipment. Though it was difficult to estimate exactly how many drugs were smuggled, investigators saw an increase in the amounts of confiscated drugs, the agency said.

Russia will complete early-stage trials on a second potential vaccine produced by the Vector Institute on September 30, the RIA news agency cited Russia's consumer health safety watchdog as saying. Meanwhile, the country has reported 5,185 new cases, bringing its total to 1,030,690 — the fourth highest in the world. Authorities have also confirmed 51 deaths, bringing the total to 17,871.