Germany is working the change through parliament — possibly in time for Germany's general election. In Africa, the IMF is helping Tanzania face a big economic hit from the pandemic. DW has the latest. 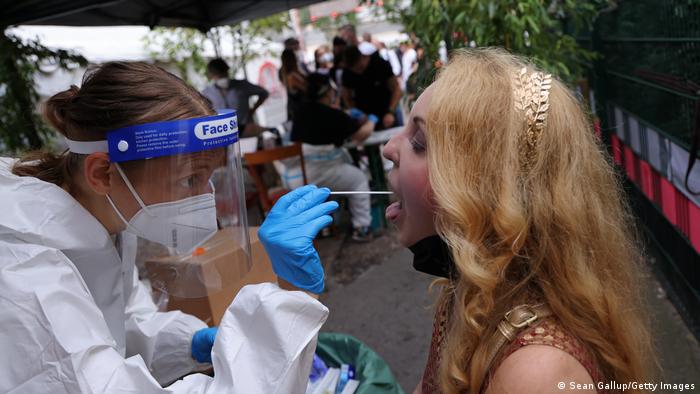 Germany's government is planning to change the COVID-19 statistic it uses as a guide for whether to impose restrictions like lockdowns or other curbs on movement and activity.

Until now, the central European country had used the average number of cases per 100,000 people across a seven-day period.

Soon, the number of people admitted to hospital per 100,000 people per week is set to become the new benchmark.

The planned change, which cleared the lower house of parliament on Tuesday, is expected to become law before this month's election, and comes as a result of progress being made vaccinating people.

With vaccinated people much less likely to suffer a serious bout of COVID-19 if infected, and more than half of Germany vaccinated, a smaller proportion of COVID sufferers are likely to end up needing hospital care.

The latest change in recording pandemic cases will mean that reaching 100 cases per 100,000 for seven days will not necessarily lead to more restrictive measures being imposed on regional populations, as it currently does.

No national limit to trigger reactions is planned for the new measurements. This is because health care capacities vary by region. Decisions will be taken according to the number of beds available in specific places.

The EU has removed six countries from the covid safe travel list, including Japan, which will likely result in restrictions for travelers entering the 27-nation bloc. The other countries removed from the list are Albania, Armenia, Azerbaijan, Brunei and Serbia.

The EU’s medicines regulator also added the extremely rare Guillain-Barre nerve disorder to the list of possible side effects from the AstraZeneca vaccine. The European Medicines Agency did note, however, that the benefits still considerably outweigh the risks.

In Germany, Health Minister Jens Spahn has spoken of a "pandemic of the unvaccinated" as he urged people to receive their COVID jabs to prevent health care services from being overwhelmed in the colder months. His remarks came as the government is set to launch a nationwide "joint vaccination week" from next Monday during which opportunities to be inoculated will be even more widely available.

The number of coronavirus patients in intensive care in Germany has doubled in the last two weeks to more than 1,300.

In Switzerland, the government announced as of Monday people will need to show a COVID status certificate to enter bars, restaurants and health clubs. The move is an effort to ease pressure on hospitals overwhelmed by patients from the country’s fourth wave of the virus.

The World Health Organization (WHO) has called for countries to avoid vaccine booster shots until the end of the year.

That’s as millions around the world have yet to receive a dose.

Speaking to journalists WHO chief Tedros Adhanom Ghebreyesus said: "I will not stay silent when the companies and countries that control the global supply of vaccines think the world's poor should be satisfied with leftovers."

Richer countries had pledged more than one billion doses to poorer countries, but Tedros said less than 15% have materialized.

Bulgaria, the EU’s least vaccinated nation with only 20% of adults being fully inoculated, is facing a new deadly surge. The EU vaccination average is 69%.

While Australia saw the first rise in infections in three days, it has begun a slight easing of lockdowns as vaccination rates soar. The country has begun to shift strategies from eliminating COVID-19 to living with it once over 70% of the population is vaccinated, a goal it believes is attainable by November.

In New Zealand, there was a drop in cases to 15 locally acquired new cases from the day before, when there were 21 new cases. The lockdown in Auckland has begun to ease.

South Korea is in the process of drawing up plans for how the country can live more normally once 80% of the adult population is vaccinated, a goal the country believes is attainable by late October. The strategy will be implemented in phases as South Korea is currently in the middle of its worst wave of infections since the pandemic began.

In Thailand, Bangkok has launched a pilot bus service equipped with a mobile vaccination team to bring vaccines to vulnerable groups including the elderly. Thailand is in the midst of the worst outbreak since the pandemic began.

The Bangkok Community Help Foundation charity launched a mass testing drive in the Khlong Toei slum. With nearly 1,000 tested, just under 50 have tested positive for COVID-19.

Those who test positive in Khlong Toei are guaranteed a hospital bed. The charity has offered rice donations, mangosteen juice and a free lunch as incentives to residents to get tested.

In Singapore, the first planeload of German tourists permitted into the city-state arrived at the airport. Last month, Singapore said it would accept fully vaccinated tourists from Brunei and Germany. 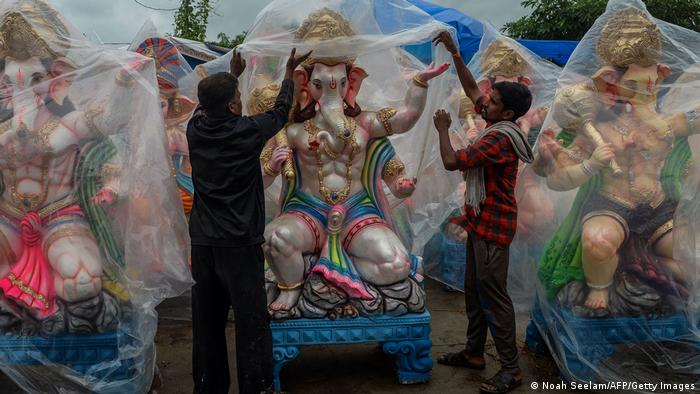 In India, the authorities are placing restrictions on a major religious festival, the 11-day Hindu Ganesh Chathurthi festival, which starts Friday. The government will reduce the height of the elephant-headed god Ganesha effigies so as to reduce the number of people needed to carry them and banning processions on the first and last days of the festival.

The International Monetary Fund (IMF) has loaned Tanzania over $567 million (€479 million) to fight the pandemic after the country initially dismissed the danger of the disease.

The third wave of the pandemic saw the economy shrink to 4.8% mainly from the lack of tourism, which has damaged "the health and well-being of its population," Bo Li, IMF deputy managing director, said. Increasing poverty and debt risk have forced the economy into a downward spiral.

Tanzania only launched a vaccine drive in July after the death of COVID-skeptic leader John Magufuli. New president Samia Suluhu Hassan took office in March and was vaccinated on live television in July to start the fightback.

The US Supreme Court announced that next month the court will return to in-person oral arguments for the first time in more than a year. While the public will be barred from attending, audio of oral arguments will continue to be broadcast by the media, a practice that only began with the pandemic.

Brazil’s health regulator is still not happy with paperwork attesting to the safety of over 12-million doses of Coronavac COVID-19 vaccine.

The regulator has halted use of the vaccines made by China’s Sinovac Biotech Ltd. The shots were produced in a plant that had not yet been authorized by the regulator known as Anvisa. Inspectors from Brazil are planning on visiting the plant in question.

In Chile, children between the ages of 6-11 will begin getting inoculated with Sinovac’s Coronavac COVID-19 vaccine. The country’s Health Ministry said the process would begin on Monday after the shot was given approval for the specific age group.

According to government figures, Chile has vaccinated nearly 87% of the population.