The UK, Germany and other European nations are planning to take action to prevent a new wave of infections. Elsewhere, Thailand may reimpose tougher restrictions for foreign travelers. DW has the latest. 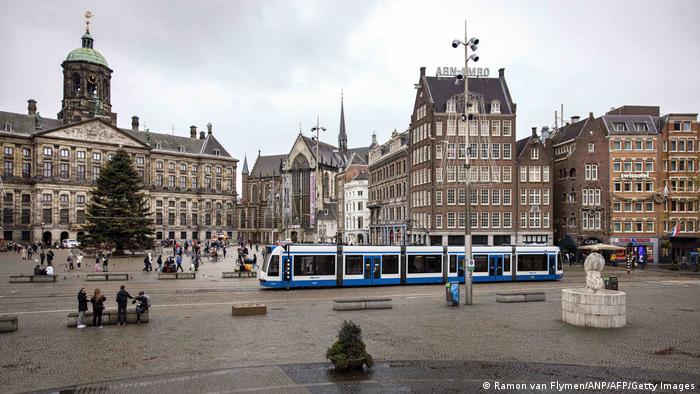 The Netherlands began a strict lockdown on Sunday

European countries such as the UK and Germany are bracing themselves due to the omicron variant of the coronavirus, which appears to be more transmissible than previous variants.

In the UK, British newspaper The Times reported British Prime Minister Boris Johnson may introduce new restrictions, which would come into effect on December 28. These measures may include a ban on indoor gatherings between two or more households and restaurants being open for outdoor service only.

Johnson said Monday that he will not rule out anything in the fight against COVID, and noted omicron hospitalizations are surging in London.

Germany is expected to introduce new measures in the coming days, such as limiting private gatherings to 10 people, according to a draft document seen by DW. These curbs will also be implemented on the December 28.

Moreover, Spain is weighing new measures to curb a rise in cases. The government of the northeastern state of Catalonia said Monday it wishes to enact a curfew, shut down nightlife, and limit social gatherings.

The Netherlands already began a strict lockdown on Sunday, with nonessential shops and restaurants closed until January 14.

A half dose was seen to raise omicron neutralizing antibody levels around 37-fold.

The company said it would continue developing a specific omicron variant vaccine and was anticipating clinical trials in early 2022.

British Deputy Prime Minister Dominic Raab told Times Radio that 12 people had died from the omicron variant of the coronavirus in the United Kingdom, and another 104 were hospitalized with the new variant on Monday. Raab also told Sky News he couldn't make "any hard and fast guarantees" against reimposing stricter COVID curbs and said he would continue to monitor latest data.

COVID cases are at their peak in the UK, with the country reporting around 77,410 new infections each day.

"Hi all. I wanted to announce that on my return home after playing the Abu Dhabi tournament, I have tested positive for COVID in the PCR test that was performed on me when I arrived in Spain," Nadal Tweeted.

Nadal had made a comeback at an exhibition event  in Abu Dhabi following a foot injury in August.

France's health authority has approved coronavirus vaccinations for children from the ages of five to 11, saying it has a positive benefit-risk ratio for kids.

Meanwhiile, several children at a vaccination center in the most populous German state of North Rhine-Westphalia accidentally received Moderna vaccine shots on Sunday.

In the EU, only the BioNTech-Pfizer vaccine has been approved for the under-12s.

It is not clear how many children were affected, though no side effects have been reported. Local authorities have notified the public of the incident, saying they had informed parents of the children affected. Police have also been informed about the incident.

Officials also acknowledged that failure on the part of the vaccination center's staff had prompted them to look more closely into the processes of vaccinating children.

District officials tried to allay any fears of side effects by stating that the European Medicines Agency (EMA), the EU's drug regulator, has already applied for approval for Moderna shots for children.

Germany began inoculating children above the age of 5 from this month after the EMA greenlit the BioNTech-Pfizer vaccine for those between 5 and 11 years of age last month. Moderna's vaccine has only been approved for children over the age of 12.

Bernd Grimmer, a member of the regional parliament in the southwestern German state of Baden-Württemberg, has died of the coronavirus. Grimmer, who belonged to the far-right AfD party, previously criticized restrictions to curb the spread of infections.

A study from the University Medical Center Mainz in Germany has found that 40% of coronavirus patients suffer long COVID symptoms six months after infection. Common symptoms of long COVID include shortness of breath, fatigue and brain fog.

New Zealand on Monday attributed a young man's death to a rare side effect from having taken Pfizer's COVID vaccine shot. The 26-year-old man suffered myocarditis, which is an inflammation of the heart muscle that makes it harder for the heart to pump blood.

Authorities already knew about the side effect because a woman also died after suffering similar symptoms from having taken her doses in August.

The man who died had not sought medical treatment for his illness and died within two weeks of taking his first dose.

In South Korea, President Moon Jae-in said Monday that hospitals must dedicate more beds and resources for the treatment of COVID patients.

Authorities imposed tougher social distancing rules earlier this month because of a surge in infections, after relaxing rules a month earlier and adopting a "living with COVID-19" policy.

Lawmakers Japan in have approved a record supplementary budget worth more than $300-billion (€266 billion) to help weather the global pandemic.

The extra budget will go some way in funding the virus stimulus package.

Japan has the world's third largest economy and the amount approved by parliament is larger than the entire annual GDP of some countries.

Thailand has approved the BioNTech-Pfizer vaccine for children between the ages of 5 and 11, the country's Food and Drug Administration said on Monday. The Comirnaty vaccine is the first to be approved for the age group in the country and would be administered in two 10 microgram doses, 21 days apart, the drug regulator said.

Thailand is also considering a mandatory quarantine for foreign visitors after having detected one case of locally transmitted infection from omicron. The country has so far reported more than 60 cases of omicron.

President of South Africa, Cyril Ramaphosa is back in the office after spending a week in isolation following a positive COVID-19 test.

Ramaphosa had not felt well after attending a memorial service for late former president FW de Klerk on December 12.

The office of the presidency confirmed Ramaphosa's return in a statement.

Scientists in South Africa were the first to detect the new omicron strain in November and raised the alarm.  The country has recorded more than 90,000 deaths and more than 3.3 million cases since the pandemic began.

A leading South African virologist, Wolfgang Preiser of the University of Stellenbosch, said vaccinations are necessary tool to protect people from the omicron variant.

'It is still the right thing to do to become vaccinated': S African virologist

"It is absolutely correct when people say that even though the current vaccines do not give perfect protection against omicron, it is still the right thing to do to become vaccinated and necessary to also have a booster dose because that strengthens your immune system and allows you should you become infected to not go on to have severe disease," Preiser told DW.

Refugees in African countries such as Kenya and Uganda are struggling due to the impact of the pandemic, according to a study from Osnabrück University in northwestern Germany.

Border closures and lockdowns are hitting migrants hard, with access to help from government agencies and aid organizations often being restricted during the pandemic. The migrants also face heightened security and health risks due to the ongoing COVID outbreak.

Dubai International Airport in the United Arab Emirates is fully operational again. It’s the first time since the start of the pandemic that the air transport hub has been operating at 100 percent capacity, according to the UAE's WAM news agency.

In 2020 there was a 70 percent dive in traffic at the airport. The return to full operational capacity comes at the same time as the country registered record number of infections.

COVID-19: Is Dubai a pandemic pioneer for tourism?

As the United Kingdom struggles with the omicron variant, Germany has declared that all travelers from the area will be asked to quarantine for two weeks, even with a negative coronavirus test.

With the holiday season in mind and the threat omicron variant, politicians are debating whether it is worth creating a vaccine registry.

German state health ministers have demanded stricter rules for entry into the country to mitigate the spread of COVID-19. The Netherlands, meanwhile, has announced an "unavoidable" lockdown. DW has the latest.