Caseloads in central and eastern Europe remain high, with new restrictions imposed in a bid to halt the spread in the Czech Republic. Serge Gnabry becomes Bayern Munich's first COVID case. Follow DW for the latest. 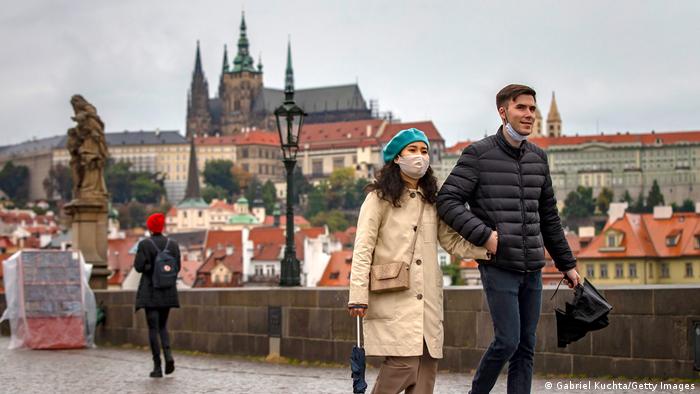 Infections in the Czech Republic hit new record highs as the number of confirmed cases increased by 11,984 on Tuesday. The country of just over 10.6 million has recorded a total of 193,246 cases since the start of the pandemic, about one third of which were confirmed within the last week.

New restrictions are also coming into effect on Wednesday to make wearing a mask obligatory outdoors and in cars — if multiple people from different households are on board.

The government later announced a partial lockdown, including the closure of shops and services to combat the surge. "The government will curb movement and contacts with other people, with the exception of trips to work, shopping and trips to the doctor," said Health Minister Roman Prymula.

The prime minister of Poland has said he will recommend implementing the highest level of coronavirus restrictions nationwide, after the country registered a new record of over 10,000 daily cases.

Poland had been adopting a policy of introducing measures for the hardest hit areas, but now the whole country is set to be a "red zone" after the total number of coronavirus infections doubled in less than three weeks.

The number of deaths in Ukraine jumped to 141 from the previous record of 113 registered on Tuesday. The national security council also reported a record 6,719 new cases over 24 hours, bringing the national total to 315,826.

Germany confirmed 7,595 new cases, according to data from the Robert Koch Institute for infectious diseases. That's an increase of over 700 new infections from the previous day.

Spain has become the first EU country to record a million COVID-19 infections, as the government considered implementing fresh restrictions on public life.

The Iberian nation's healthy ministry reported 16,973 cases over the past 24 hours, taking the total to 1,005,295 since its first case was diagnosed on January 31.

Charles Michel, president of the European Council, has invited EU leaders to take part in an informal video conference on the topic of the pandemic as cases surge across the continent. The proposed conference on October 29 is needed "to strengthen our collective effort," he tweeted.

Greater Manchester Mayor Andy Burnham accused the government of enforcing policies that would "increase levels of poverty, homelessness and hardship" in the region of nearly 3 million people. The measures include mandating pub closures and restricting interactions between people from separate households.

Thailand welcomed its first tourists since April, with a group of 39 Chinese visitors who flew in from Shanghai. The visitors came as part of a "special tourist visa" program, devised to restore the country's travel industry, which welcomed almost 40 million foreign visitors last year and ordinarily accounts for roughly 10% of the country's GDP.

Over 230 Russian and Ukrainian fishermen were flown into New Zealand last week, and 18 of the crew members have since tested positive for coroanvirus while in quarantine. The Pacific nation has almost completely eliminated local transmission of the virus, but regularly records small numbers of new cases among people coming from abroad.the few people still able to come from abroad.

The Philippines has lifted a ban on non-essential foreign trips by its nationals. However, in order to travel, people must be able to demonstrate confirmed return tickets, travel and health insurance, a declaration acknowledging the risks and the possibilities of delays in travel, and a negative virus test within 24 hours of departure.

Pakistani officials issued a warning that another lockdown could be imposed if people don't stop violating social distancing rules. The announcement came after Pakistan reported 660 new cases in the past 24 hours and 19 deaths, bringing the total number of infections to 324,774 and fatalities to 6,692 since the start of the pandemic.

Prime Minister Johnson has unveiled a new three-tiered system of localized restrictions. The north of England has been recording spikes in coronavirus cases and bars in the city of Liverpool will have to close.