Prime Minister Johnson has unveiled a new three-tiered system of localized restrictions. The north of England has been recording spikes in coronavirus cases and bars in the city of Liverpool will have to close. 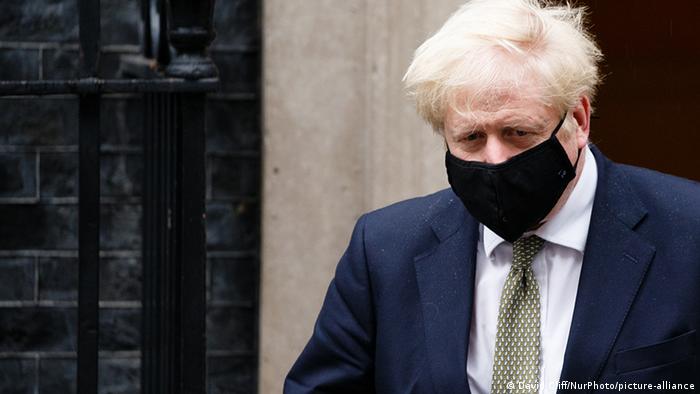 British Prime Minister Boris Johnson on Monday implemented a three-tiered system of restrictions with the closure of pubs in certain parts of England as the country tries to deal with spikes in coronavirus cases.

Infections of the novel virus are on the rise again across the UK, with northern parts of England suffering the most.

The new restrictive measures will mean the closure of bars, among other businesses, in areas deemed "very high" risk, the highest level in the tiered structure.

Until now, Merseyside, in the northwest of England, is the only region regarded at this level of risk so gyms, leisure centers, betting shops, adult gaming centers and casinos will close in this part of the country, Johnson told parliament.

"We must act to save lives," Johnson said, adding he was hoping to avoid another nationwide lockdown by imposing localized restrictions.

'Bleak' outlook without a lockdown

"If we let the virus rip, then the bleak mathematics dictate that we would suffer not only an intolerable death toll from COVID, but we would put such a huge strain on our NHS with an uncontrolled second spike that our doctors and nurses would simply be unable to devote themselves to other treatments."

Health officials said new data showed coronavirus cases were rising across the north of England and in some more southerly areas too, while the virus was beginning to infect the elderly.

Manchester intensive care consultant Jane Eddleston said 30% of critical care beds were occupied by patients suffering from the coronavirus, which was having a negative impact on the level of healthcare received by others.

Breakdown of the tiers

DW's UK correspondent Birgit Maass described the dire situation in the country. "We are in a similar situation as we were in lockdown when you look at the number of people in hospitals," Maass said. "Not the same amount of deaths yet but we know doctors, particularly in the north have England, have been warning. One of the doctors described it as a tsunami coming towards them."

"A medium-high level of alert is more or less what we are seeing now so pubs, for example, need to close at 10 p.m. and mixing between households is restricted but not forbidden."

"Also a high level alert is not a complete lockdown. For example schools will remain open, but pubs would have to close and household mixing would more or less banned."

British Prime Minister Boris Johnson and the EU's Ursula von der Leyen stressed the importance of finding a way forward on a post- Brexit deal. Time is running out to bridge "significant gaps" between the two sides.