In Brussels and Vienna, police have clashed with scores of protesters demonstrating against COVID restrictions. Belgium and Austria have imposed a curfew and lockdown to fight the spread of coronavirus infections. 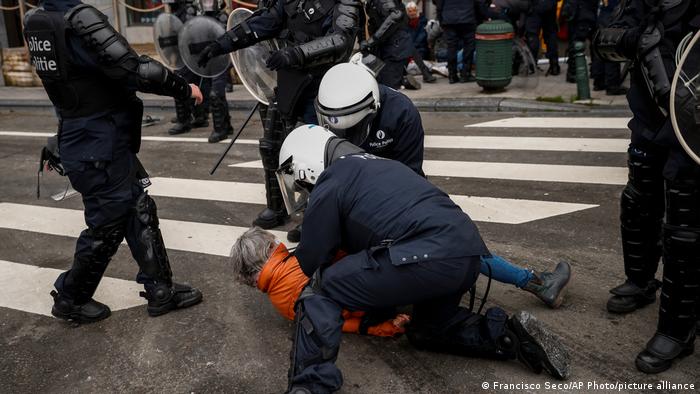 In Belgium, police said they have detained more than 400 people in Brussels to prevent banned protests against measures to stem the coronavirus outbreak. Hundreds of people turned up at several locations around the capital after numerous calls to protest circulated on social media platforms.

A police spokesman said most arrests took place around train stations in the capital, adding that those involved in the banned protests would be allowed to leave one by one after identification. Dozens of demonstrators also gathered at the Atomium, a landmark building in Brussels.

Belgium has heightened police patrols fearing a possible spill-over of protests against COVID restrictions after its neighbour the Netherlands faced violent protests and rioting in recent weeks. Last week the country banned non-essential trips in and out of Belgium until March 1.

Belgium has recorded one of the highest death rates in the world during pandemic.

In Austria, thousands of protesters clashed with riot police in the capital Vienna at the site of a banned rally against COVID-19 restrictions.

Viennese authorities banned several protests planned for this weekend, including one by the far-right Freedom Party, for failing to observe health safety rules such social distancing and the wearing of face masks.

An estimated 5,000 protesters gathered on a square in the city center across the road from the former imperial palace as well as from the offices of conservative Chancellor Sebastian Kurz and President Alexander Van der Bellen.  Police equipped with riot gear and face masks blocked crowds from marching down the road.

Protesters were seen carrying Austrian flags and waving banners saying "Kurz must go." Many did not wear face masks.

Bolivia has reached a deal to receive around 1 million vaccine doses in February via the COVAX program. Earlier this week, the country received 20,000 doses of Russia's Sputnik V vaccine.

"In February we will receive almost a million vaccines. We are making progress, we have vaccines, we have hope, we will move forward," said President Luis Arce.

The COVAX program, backed by the WHO and Gavi vaccine alliance, wants to deliver 1.3 billion doses of approved vaccines — from suppliers, including Pfizer and AstraZeneca — to 92 eligible low- and middle-income nations this year.

A shipment of Oxford-AstraZeneca jabs produced in India is due to arrive on Monday, with the first injections to begin soon afterwards.

South Africa — the worst virus-hit country on the continent — plans to vaccinate 67% of its population by the end of the year.

Algeria has launched its coronavirus vaccination campaign after receiving a first shipment of the Russian Sputnik V vaccine. The drive began in the northern city of Blida, which was the epicenter of the country's virus outbreak.

While the country has ordered 500,000 doses from Moscow, it is also expecting a shipment of the AstraZeneca vaccine on Sunday. In a bid to immunize all of Algeria's 44 million people, doses of vaccines have also been procured from India and China.

The registration would be valid for one year, the government said.

Italy's medicines agency AIFA has approved the AstraZeneca vaccine for all adults but recommended alternatives should be given to people over the age of 55.

For the best use of the vaccine, the agency recommended: "preferential use of the AstraZeneca vaccine, pending further data, in subjects between 18 and 55 years old, for whom more solid evidence is available."

Despite the European Union approving the shot, the agency noted "a level of uncertainty" about the vaccine's effectiveness in people over the age of 55, as the age group was "poorly represented" in trials.

The Italian agency's decision comes after Germany's vaccine commission said Thursday it could not recommend the use of AstraZeneca's coronavirus vaccine for persons aged 65 years and older.

German Health Minister Jens Spahn says he is open to using coronavirus vaccines from Russia or China to overcome the current deficit of doses in Europe.

"Regardless of the country in which a vaccine is manufactured, if they are safe and effective, they can help cope with the pandemic," Spahn told the Frankfurter Allgemeine Zeitung newspaper on Sunday, adding that they must be approved by the European Medicines Agency (EMA).

Russia announced Friday it would be able to supply 100 million doses of its Sputnik V vaccine to the EU in the second quarter of the year, which would allow some 50 million people to be vaccinated. The vaccine approval application has already been submitted to the EMA.

Russia has begun supplying its Sputnik V COVID-19 vaccine to the rebel-controlled region of Donetsk in eastern Ukraine despite a ban by Kyiv, a local news outlet said on Sunday.

"A couple of thousand doses were supplied. Such deliveries will come on a regular basis," Denis Pushilin, head of the self-proclaimed Donetsk republic, was quoted by the region's news agency DAN as saying. "We are grateful to Russia that it supports us in every field."

He said health workers and teachers were among those being vaccinated first.

Ukraine's government is planning to receive shipments of Western-made vaccines from February and has prohibited the use of Russia's Sputnik V.

But it has little control over Donetsk on its border with Russia, where a conflict between Ukrainian troops and Moscow-backed separatist rebels has killed more than 13,000 people since 2014.

The Jewish state has launched an aggressive coronavirus vaccine campaign on Israeli territory, an effort widely regarded as the world's fastest per capita.

More than 3 million of the country's 9 million people have received the first of two required jabs of the Pfizer vaccine.

The Palestinian Authority has not publicly asked for Israel's help procuring vaccines, but it has made agreements with four vaccine providers, including the makers of Russia's Sputnik V.

In China, a World Health Organization (WHO) team tracing the origins of COVID-19 on Sundayvisited a food market in Wuhan, where the virus was initially detected.

The current restrictions, which include a restaurant curfew and ban on gatherings of more than four people, have been in place since early December. Chung said the decision to keep the curbs in place came after a new outbreak was detected at missionary training schools last week.

The Pakistani government says it will receive 17 million doses of the AstraZeneca vaccine under the WHO's COVAX Facility, out of which up to 7 million would arrive by March.

Planning Minister Asad Umar tweeted Saturday that a plane has also been sent to China to bring the first tranche of half a million doses of China's Sinopharm's vaccine, enough to inoculate 250,000 out of 400,000 health workers.

In Australia, the western city of Perth will go into a five-day lockdown on Sunday evening after a hotel quarantine security guard tested positive for coronavirus.

A stay-home order is in place with exceptions for shopping for essentials, going out for medical or health care needs, exercise in the local neighborhood for one hour per day, or to work for those who can't work remotely.

Authorities believe the guard, a man in his 20s, has likely contracted the coronavirus variant first detected in Britain, which is thought to be highly contagious, AAP reported.

Western Australia had gone nearly 10 months without a coronavirus case detected in the community, the news agency said.

The World Health Organization expert team also plans to visit the Huanan Seafood Market, which was linked to many of the first coronavirus cases.

Why was the first response of Chinese officials to the virus to cover it up? DW’s Tim Sebastian meets the president of a Beijing think tank who says China acted quickly and deserves credit over its response.

UN: 'Vaccines must be available for everyone, everywhere'