Chinese government advisor: Beijing ′wasted no time′ over coronavirus | News and current affairs from Germany and around the world | DW | 09.09.2020

Why was the first response of Chinese officials to the virus to cover it up? DW’s Tim Sebastian meets the president of a Beijing think tank who says China acted quickly and deserves credit over its response.

There had been initial "hesitation" while trying to find out more about the coronavirus and avoid a "false alarm," the head of a Chinese think tank has told DW’s Conflict Zone.

"At the beginning, nobody knew this was deadly, this is going to be a pandemic, this is going to sweep the world. Nobody knows about that. So, they have to be careful in claiming it's such a deadly disease," Wang Huiyao said.

Conflict Zone host Tim Sebastian raised the case of Dr. Li Wenliang, who had been pressured by local officials over his warnings about the threat of the virus. Li later died of the disease.

Wang admitted Dr. Li had perhaps "had some initial pressures," but "when the government realized this is a deadly disease, they wasted no time."

Wang defended Beijing's reaction to Taiwanese efforts to expand relations with the international community. The Chinese foreign minister recently warned that a “heavy price" would be paid after a Czech delegation visited the island, which China claims sovereignty over, but is self governing.

But Wang disagreed that China was picking a fight with its largest export market.
"There are certain, you know, guidelines and principles when countries establish diplomatic ties and recognize 'One China' policy, and that should not be violated or breached...And if that happens then China certainly has a right to protest," Wang said.

The think tank chief said there was "misunderstanding" over Hong Kong. 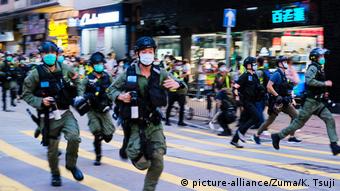 "I certainly think that the Hong Kong young people have some legitimate concerns of the widening gap between rich and poor and things like that. So, I think the Chinese government has realized that," he said, citing its Greater Bay Area economic project.

"But on the other hand, I don't think we need a chaotic Hong Kong where airports are blocked and, you know, bystanders were [set on fire] and the legislative council was stormed and smashed, shops have been vandalized."

"The central government, of course, according to the basic law, they have the right for defense, diplomacy and security. And all the countries have a security law and China is no exception."

Beijing says it is promoting security and preventing terrorism in Xinjiang province too, where more than one million Uighurs have been detained in "re-education" camps.

Wang said there was "no hard evidence or proof or credible data" over such detentions and that many had "graduated" from their training.

A new report has accused China of pressuring hundreds of thousands of Uighur Muslims to pick cotton in the province of Xinjiang. Activists have claimed major Western fashion brands are complicit in the abuse.