The US president has called on more businesses to require workers to receive the COVID-19 jab. Meanwhile, Malaysia has approved the BioNTech-Pfizer booster shot. Follow DW for the latest. 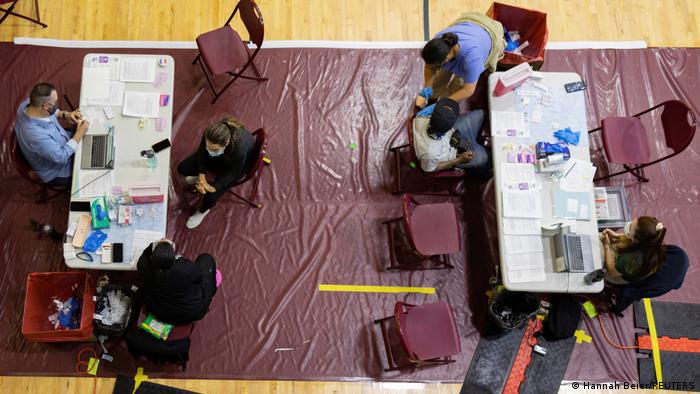 US President Joe Biden on Thursday advocated for COVID-19 vaccine mandates to force roughly  67 million unvaccinated American adults to get the jab, even as he acknowledged that the requirements weren't his "first instinct.''

"There is no other way to beat the pandemic than to get the vast majority of the American people vaccinated,'' Biden said in Chicago at an event promoting the mandates.

Over the next few weeks, more than 100 million Americans will be affected by the sweeping vaccine requirements ordered by Biden.

Biden's administration is also encouraging employers to take more steps to push their staff toward vaccination.

"I know the vaccination requirements are a tough medicine, unpopular with some, politics for others. But they're lifesaving and game-changing for our country," Biden said.

In a conditional approval, Malaysia on Friday gave the green light to the use of the BioNTech-Pfizer coronavirus vaccine's booster shot.

The country has allowed the jab to be used only for adults aged 18 and above, at least six months after they have received their second dose, the Health Ministry said in a statement.

Singapore is mulling allowing quarantine-free entry to immunized travelers from the United States, its minister for trade and industry said.

Last month, the city-state had started a similar plan for travelers from Germany and Brunei amid a gradual relaxation of COVID-19 border curbs.

"We have had successful pilots of Vaccinated Travel Lanes (VTL) with Germany and Brunei to facilitate the entry of fully vaccinated individuals into Singapore for business and leisure," Gan Kim Yong said in a speech during a visit to Washington on Thursday.

"We are now working on a VTL with the US as soon as possible, and certainly before the end of the year."

India: Festival season gets underway in shadow of pandemic

Panama is set to buy 3 million additional doses of the BioNTech-Pfizer vaccine to roll out next year, the government announced on Thursday.

The $45 million (€39 million) order will boost the total number of BioNTech-Pfizer shots purchased by the country to 10 million.

The Central American nation is planning to offer booster doses to vulnerable groups, including health workers, immunocompromised, or people above the age of 55.

Brazil too is in talks to purchase some 150 million doses of the BioNTech-Pfizer shot for 2022, according to a document sent by the Health Ministry to a Senate inquiry on Thursday.

The document was shared with the inquiry, which is investigating the country's handling of the COVID-19 crisis, after senators sought information on plans for Brazil's vaccination efforts next year.

Meanwhile, Pfizer on Thursday said that it has sought authorization from United States regulators for the emergency use of their jab developed with BioNTech for children between the age of 5 and 11.

The US Food and Drug Administration has called on a panel of advisers to meet and discuss the application on October 26.

Germany on Friday reported 10,429 new cases of COVID-19 and 86 deaths, according to data released by the Robert Koch Institute (RKI) disease control body.

Merck had agreed to make its rival's vaccine after discarding two of its own experimental COVID-19 vaccines earlier this year.

Doctors in Australia have warned that faster reopening plans in Sydney could risk lives and burden health systems, as the country's biggest city readies itself for an end to a lockdown that has been in place for over 100 days.

Lockdown measures are slated to be lifted on Monday after the state of New South Wales reached a target of fully vaccinating 70% of its adult population.

The Australian Medical Association (AMA) said in a statement late Thursday that opening "too fast or too early" will result in avoidable deaths and the reintroduction of lockdowns.

"New South Wales must not be reckless at this critical time," AMA said.

COVID: EU regulator backs BioNTech-Pfizer vaccine booster for 18 and over

While the European Medicines Agency approved a third dose for people over 18-years-old, the agency said it was up to member states to decide whether to use them.