Berlin's Vivantes Humboldt Hospital says it is not accepting new patients after several cases of the new, more infectious British coronavirus variant were discovered. Follow DW for the latest. 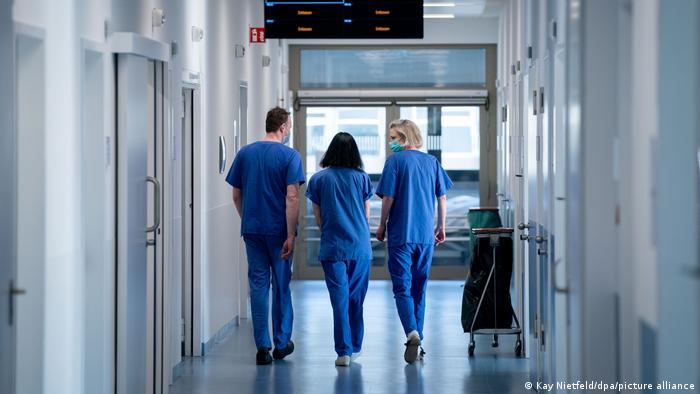 The Humboldt hospital in Berlin is refusing new patients

Berlin's Vivantes Humboldt Hospital is no longer admitting patients after several infections with the new, more infectious British coronavirus variant were discovered there.

Routine screenings in the ward for internal medicine and cardiology have revealed positive test results in 14 people so far, the hospital confirmed on Saturday.

The new strain of the coronavirus that emerged in Britain is more transmissible and potentially also more deadly than the previously prevalent one, according to experts.

The admissions ban imposed since midnight is in effect until further notice. Emergency cases are being taken to other hospitals.

Hospital staff are under so-called shuttle quarantine, meaning they are only allowed to travel between their homes and the hospital.

Severe reaction to Moderna's COVID-19 vaccine is "rare," US health authorities have found, with only 10 cases of anaphylactic shock among a reported 4,041,396 first doses administered between December 21 and January 10.

Based on this early monitoring, anaphylaxis after receipt of the Moderna COVID-19 vaccine appears to be a rare event," the Centers for Disease Control and Prevention said in a report.

Pfizer-BioNTech will ship the first 40 million coronavirus vaccines to poorer nations next month on a non-profit basis, through the globally-pooled COVAX facility. The World Health Organization's COVAX scheme is aimed at 20% of vulnerable populations this year.

"We can only end the pandemic anywhere if we end it everywhere," said WHO chief Tedros Adhanom Ghebreyesus.

British pharmaceutical company AstraZeneca informed European Union officials Friday that supplies of its coronavirus vaccine to the bloc will be "lower than originally anticipated" due to reduced production at a manufacturing site.

It would cut deliveries of its vaccine to the EU down to 31 million doses — a 60% slash — in the first quarter of the year.

The company blamed "reduced yields at a manufacturing site within our European supply chain," without giving details

The EU drug regulator is due to decide on the approval of AstraZeneca's vaccine on January 29. The company has already been granted emergency authorization in the UK.

The number of confirmed coronavirus cases in Germany increased by 16,417 to 2,122,679, according to a tally from the Robert Koch Institute (RKI) for infectious diseases. The death toll rose by 879 to 51,521, the data showed on Saturday.

Spain's chief of the defense staff resigned on Saturday, the armed forces said, after a row over him getting the coronavirus vaccination despite not being on a priority list.

"In order to preserve the image of the armed forces, General Villarroya today presented his resignation request to the defense minister," the armed forces said in a statement.

The Netherlands has imposed a nighttime curfew that will go into force from Saturday — marking the country's first curfew since the Second World War. Anyone found violating the curfew, which will be in force between 9 p.m. and 4:30 a.m, will face a fine of €95 ($116).

The measure, intended to help stem the spread of the more contagious variant of the coronavirus, will remain in force until February 9. Schools, restaurants and all nonessential businesses remain closed.

Norway's government has ordered the closure of shopping venues, gyms, swimming pools and sports centers in 10 Oslo municipalities after the discovery of the UK coronavirus variant in a retirement home. The measures — the strictest to be imposed since March — are expected to remain in place until the end of the month.

Sweden said on Saturday that it plans to introduce a temporary ban on entry from Norway due to the spread of the new mutated form of the coronavirus in the neighboring country.

The Swedish health authority recommended that travelers from Norway self-isolate for at least a week and test for COVID-19 upon entry to Sweden.

Denmark has banned all flights from the United Arab Emirates for five days saying it needed to make sure the testing regime in Dubai was rigorous amid suspicions of irregularities with the coronavirus tests administered in the city before departure.

The Scandinavian country earlier this month made it mandatory for all passengers to present a negative test no more than 24 hours old before boarding a Denmark-bound flight.

Cuba and Panama have both detected their first cases of the coronavirus variant from South Africa. In Panama, a 40-year-old man from Botswana who had come from South Africa tested positive for the variant. He had been isolated since entering the Caribbean country on January 5.

In Cuba, a traveler who had been in South Africa was found with the variant but reported no symptoms. Those he came into contact with have tested negative, health authorities said, but added that the disease in its mutated form could already be spreading in Cuba.

Canadian Prime Minister Justin Trudeau warned his citizens not to travel abroad, saying further coronavirus restrictions may be announced that would make it harder to reenter the country.

"People should not be planning on nonessential travel or vacation travel outside of the country, particularly because ... we could be bringing in new measures that significantly impede your ability to return to Canada at any given moment without warning," Trudeau said.

He said one option was to make it mandatory for people to quarantine in a hotel at their own expense when they arrive in Canada.

Canada closed its borders to most nonessential travelers last March and required incoming travelers to quarantine for 14 days.

US President Joe Biden said "well over 600,000" Americans could die from COVID-19 as he stepped up federal aid.

"The virus is surging. We're at 400,000 dead, expected to reach well over 600,000," Biden told a news conference, giving his highest estimate yet for the US outbreak's eventual toll.

He urged Congress to move fast on his $1.9-trillion plan to battle COVID-19 and provide economic relief to struggling Americans.

The federal government has received about 750,000 doses of the BioNTech-Pfizer vaccine so far, with almost 600,000 administered. These aren't nearly enough for the country's 750,000 frontline medical workers, each of whom will need two doses.

State governors and the private sector have been pressing the government to allow them to acquire vaccines on their own and Lopez Obrador said that they will be allowed to do so, as long as they inform federal officials and use only approved vaccines.

Cuba's Sovereign 02 vaccine, one of its four candidates, entered a new trial phase this week.

"If all goes well, we will have the entire population vaccinated this year," Vicente Verez, director of the state-run Finlay Vaccine Institute (IFV), told news agency AFP. IFV had the capacity to produce 100 million doses of Sovereign 02 provided it cleared the trial phase, he said.

Sovereign 02 is the most advanced of four candidate vaccines being developed by Cuba — a communist-run nation that is one of the least-affected nations in the region by the coronavirus epidemic.

Hong Kong's government declared its first lockdown on Saturday, ordering thousands of people to stay in their homes as authorities tackled an ongoing outbreak of the coronavirus in one of the city's poorest and most densely populated districts.

The lockdown affects 10,000 people living in the Jordan neighborhood in Kowloon. Authorities said they planned to test everyone in the designated zone within 48 hours, and the residents will not be allowed to leave unless they can show a negative test.

"Residents will have to stay at their premises to avoid cross-infection until they get their test results," Health Minister Sophia Chan told reporters on Saturday.

Sri Lankan Health Minister Pavithra Wanniarachchi has tested positive for the coronavirus and will self-isolate, officials announced Saturday. The minister had publicly endorsed sorcery and magic potions to stop the disease from spreading on the island nation.

Wanniarachchi had publicly consumed a "magic potion" — later revealed to contain honey and nutmeg — after a sorcerer claimed the recipe would provide life-long immunity against COVID. Sri Lanka approved the use of the vaccine developed by AstraZeneca and Oxford University only hours after the minister tested positive.

One year after the world's first COVID-19 outbreak in Wuhan brought life to a standstill, streets and cafes in the central Chinese city are full and people are at work.

Elsewhere in China, authorities continue to battle the virus. The country has lauded its pandemic response, particularly in Wuhan, as a "heroic" victory.