Austria and Denmark have said they will work with Israel on second-generation jabs to tackle mutant strains. Austria's chancellor said it was best not to rely on the bloc for future vaccines. 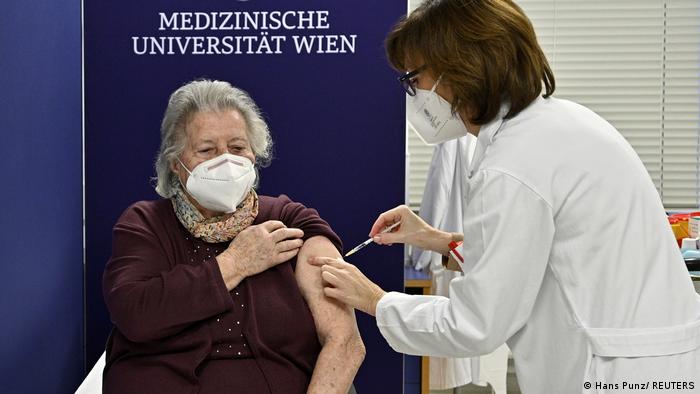 Austrian Chancellor Sebastian Kurz on Tuesday said his country and Denmark plan to stop relying solely on the European Union for coronavirus jabs.

The announcement appeared to be a rebuke to the EU's joint vaccine procurement program.

Kurz said both countries plan to work with Israel to produce second-generation vaccines.

While Israel has vaccinated a large part of its population, the EU has faced criticism for its slow vaccine rollout.

Austria looks ahead to new variants

Kurz said it was right in principle to take a European-wide approach to inoculation.

However, he maintained that the European Medicines Agency (EMA) has been "too slow" to approve vaccines, and drew attention to production problems and delivery failures.

"We must prepare for further mutations and should no longer be dependent solely on the EU in the production of second-generation vaccines," Kurz told the Austria Press Agency.

Austria would "no longer rely on the EU in the future and will in the coming years produce doses of second-generation vaccine for further mutations of the coronavirus together with Israel as well as researching jointly treatment possibilities.''

So far, Austria has vaccinated a little under 5.5% of its population. Experts estimate that 6 million Austrians will need have to be vaccinated every year for the foreseeable future.

"The pandemic will stay with us for a long time with different mutations," said Kurz.

Making sure vaccines are safe

COVID-19 Special: How do we make sure vaccines are safe?

In a separate, conciliatory message on Twitter, Kurz paid tribute to Brussels for trying to procure vaccines early, despite the later problems.

"I am happy that Ursula von der Leyen took the initiative so early for procuring vaccines for the EU. But we already have to prepare now for future dangerous COVID-19 mutations," Kurz wrote on Twitter.

More countries acting on their own

"I don't think it can stand alone, because we need to increase capacity. That is why we are now fortunate to start a partnership with Israel," she told reporters on Monday.

Both Kurz and Frederiksen are set to travel to Israel this week to take a look up close at Israel's rapid vaccine roll-out.

The pair were expected to meet Prime Minister Benjamin Netanyahu to talk about vaccine research strategies.

Austria and Denmark are not the only country to act outside of the EU procurement scheme. A growing number of EU countries have placed side orders of vaccines from China and Russia, despite the EMA not having yet ruled whether they are effective or safe.

COVID-19 Special: Why we should not rely on vaccines alone