Coronavirus and security issues cast a pall over Myanmar polls | Asia| An in-depth look at news from across the continent | DW | 30.09.2020

Coronavirus and security issues cast a pall over Myanmar polls

Political parties in Myanmar are calling for the postponement of a national election amid rising COVID-19 cases. Continued unrest in the country's northeast also threatens to keep people from voting. 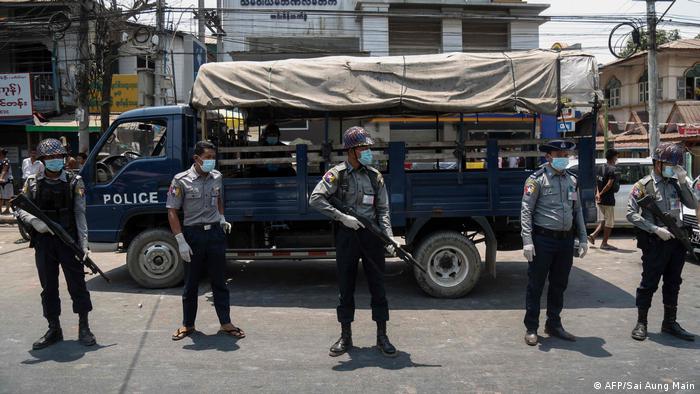 But the ruling National League for Democracy (NLD) party, headed by State Counsellor Aung San Suu Kyi, has decided to go ahead with its election campaign on social media.

On September 8, Suu Kyi had to cancel a public rally in her constituency in Yangon. Instead, the Nobel Peace laureate took her campaign to Facebook.

In one of her live Facebook videos, Suu Kyi urged her supporters to follow health measures during the election period to ensure that votes can be cast freely in November.

Since Monday, Yangon has been in a state of lockdown. Authorities closed its borders, schools and recreational facilities remain shut and gatherings of more than six people are not allowed in the city. Domestic travel within Myanmar has also been restricted.

As of Wednesday, the country has reported 12,425 confirmed COVID-19 cases and 284 related deaths.

Lack of interest in election

Aung Thu Hein, a National Democratic Force Party (NDF) candidate in Yangon, says that most people in Myanmar are unlikely to vote in the upcoming election due to a surge in the virus cases.

"People are no longer interested in the election. They care about the virus," he told DW.

According to Myanmar's Constitution, the UEC can postpone elections for two months, but it said last week that it has no plan to delay the vote.

"We are not sure if things will get better even if they postpone the election," Thu Hein said.

Thant Myint-U, the author of The Hidden History of Burma, recently said in a tweet that the November election could be "deeply flawed," adding that it "won't help Myanmar address any of its big challenges: violent conflict, climate change, inequality and underdevelopment."

Apart from the pandemic, people in some parts of the country are wary of the security situation in their areas. Rakhine state has been particularly volatile since violent clashes erupted there in 2017, forcing hundreds of thousands of Rohingya Muslims to flee to neighboring countries.

Activists hoped that the authorities would try to normalize the situation by allowing Rohingyas to cast their ballots in the upcoming polls, but the UEC in August denied them the right to vote and barred six of their candidates to participate in the polls.

Authorities in Myanmar are facing severe criticism and pressure from the international community over their handling of the Muslim ethnic community.

"The elections on November 8 are an important milestone in Myanmar's transition, which the international community has supported with funding and technical expertise," said a recent statement by handful of Western countries including Germany and the US.

"We underline the importance of ensuring individuals of all communities, including Rohingya, are able to participate safely, fully, and equally incredible and inclusive elections."

Thomas Andrew, the UN human rights envoy to Myanmar, recently told the UN Human Rights Council that "the results of an election cannot accurately reflect the will of the people when the right to vote is denied because of a person's race, ethnicity or religion."

In the 1970s, Dictator Ne Win removed Rohingya from the list of officially recognized ethnic groups in the country. Rohingya continued to exercise their voting rights by using National Registration Cards (NRC) and Temporary Identity Cards (TIC), but in 2015 the authorities canceled the TIC, thus stripping them of voting rights.

Nay San Lwin, a Germany-based Rohingya activist and co-founder of the Free Rohingya Coalition (FRC), told DW that the government is trying to downgrade the Rohingya status to that of a foreigner by forcing them to apply for a National Verification Card.

"Authorities have no intention to restore our citizenship rights," San Lwin said. "We hoped that we would get back our rights due to the pressure from the international community. But, unfortunately, this government is behaving in the same way as the military junta did," he added.