Despite international calls for a ceasefire and a coordinated national response, ethnic armed groups and the Myanmar military are still engaging in conflict — putting the immediate survival of many civilians at risk. 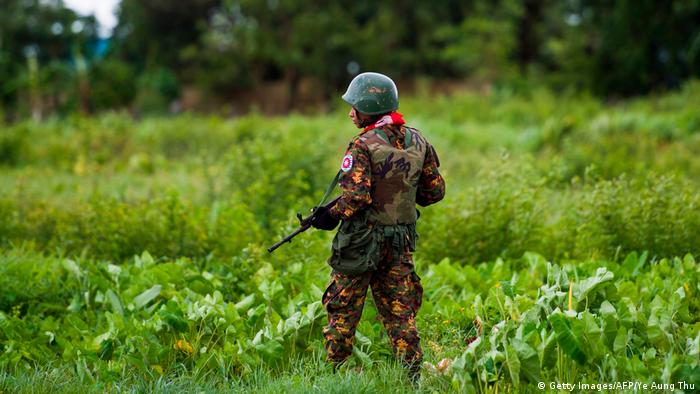 Under the threat of conflict, adhering to social distancing and disease prevention measures are a secondary priority in many ethnic minority states in Myanmar. People are faced with inadequate medical care, curbs on movement due to both conflict and the pandemic, and trouble accessing basic goods and services.

Despite the government's stated commitment to tackle the COVID-19 pandemic, the Myanmar military, also known as the Tatmadaw, has continued its offensives in many of the country's seven minority states, particularly Rakhine and Chin states, as well as Karen state.

The Karen ethnic group — who constitute roughly 7% of the country's population — have for decades faced forced relocation, military offensives, systematic rape and murder, and have seen their villages, farms and property burned — like many other minority groups in Myanmar.

The conflicts in Myanmar between ethnic armed groups and the military, which have gone on since 1948, constitute what can be considered the world's longest civil war. In February, over 2,000 Karen were forced to flee their homes in northern Karen state amid an offensive launched by the army, while other regions of the state are still facing regular attacks initiated by the military.

"In ethnic states including Karen, the government and its security forces are drastically increasing the vulnerability to the deadly virus because of military's brutal offensive attack on communities without caring calls of ceasefire from ethnic armed organizations, ethnic political parties, civil society, and the United Nations," the Karen Peace Support Network (KPSN) said in a statement last month.

"Their villages have been burnt down and they have been killed like animals in the forest," said Naw Wahkushee, a spokesperson for the KPSN. "There are currently 15 villages that are under threat and people are ready to flee if there is more escalation of the conflict in those areas," she said. "They are more afraid of the Myanmar army than they are of COVID-19."

In the northern state of Rakhine, where the armed group Arakan Army is currently embroiled in an escalating conflict with the Myanmar military, the number of displaced persons was 164,211 by the end of April, according to a statement issued by the Rakhine Ethnic Congress.

"In those areas of guerrilla conflict, in northern Shan state, and much more seriously the whole of Rakhine and southern Chin, concerns about COVID-19 are secondary to concerns about surviving," said Anthony Davis, a security consultant specializing in Myanmar issues.

On April 29, outgoing UN envoy to Myanmar Yanghee Lee issued a scathing farewell letter, calling for an investigation into allegations of war crimes and crimes against humanity in Rakhine and Chin states. "While the world is occupied with the COVID-19 pandemic, the Myanmar military continues to escalate its assault in Rakhine state, targeting the civilian population," Yanghee wrote.

On April 2, 18 foreign ambassadors to Myanmar also called for an end to armed conflicts between the military and ethnic armed groups, calling for both sides to focus on "protecting the most vulnerable communities from the devastating impact of COVID-19."

Later that month, the government announced a joint COVID-19 committee with ethnic armed groups to collectively curb the spread of the pandemic, and members of the committee are expected to share information on their respective measures.

However, according to Davis, the pandemic is unlikely to change the state of conflict in each region. "In some areas, it may put it [conflict] on hold and I'm thinking particularly of conflicts between the Tatmadaw and the Shan, and the KNU. But elsewhere, most notably Rakhine, it's making no difference whatsoever. It's not for the last months and it will not for the next months — the war is continuing," he said.

Where does the funding go?

While millions of dollars in international aid has been sent to the central government of Myanmar, ethnic groups, who typically maintain their own healthcare and education infrastructure, fear that a centralized response against COVID-19 won't be enough.

On April 20, the World Bank approved a $50 million (€46 million) credit line for Myanmar's COVID-19 response. The Myanmar government has also allocated a budget of 2.4 billion Myanmar Kyats ($17 million, €15.75 million) for taking preventive measures in camps for internally displaced persons throughout the country, and millions more have been sent by private donors, NGOs and international aid organizations.

But much of the cash is meant to be used to boost the country's minimal intensive care capacity — mostly in Yangon, Myanmar's most populous city and the epicenter of the country's outbreak. This kind of healthcare is mostly inaccessible to people outside of urban centers.

Read more:  Press freedom in Myanmar: Media under pressure in the corona crisis

Naw Wahkushee added that for the Karen National Union (KNU), its own healthcare system is more effective, as people can access services and material in their own language and region. Additionally, most groups are involved in educating people and implementing their own measures to curb the spread of COVID-19. Those measures in Karen state include screening the temperature of people crossing district lines and setting up their own isolation centers.

Even while Myanmar uses the aid to develop its central health system, most of the country doesn't have the infrastructure to manage a pandemic. "Most people in Myanmar who die of this are going to die at home," said Davis. "The idea of flattening the curve, that may be relative in Mandalay and Yangon, but in the villages, they're going to die at home."

Critics also say that the aid devoted to internally displaced people's camps is unlikely to reach all of those in need, and would not be enough to offset what is lost in blocked humanitarian assistance and supply deliveries, which have been hindered due to closed borders. Roughly 241,000 displaced people are living in such camps throughout the country, according to the United Nations Office for the Coordination of Humanitarian Affairs.

"It's a big concern for us that there will be hunger, after they closed the border, and because of the economic crisis of the situation. It's not as easy to transport supplies as it was before," says Naw Wahkushee. "We are calling for every group to work together to save lives."

The Burmese leader and her party are attempting to bring in more democratic reforms ahead of general elections later this year. The military, however, does not want to let go of power. (11.03.2020)

A UN envoy has called for an international probe into allegations of war crimes in Myanmar's conflict-ridden Rakhine State. She said the military still targets civilians there while the world focuses on COVID-19. (29.04.2020)