Coronavirus and exercise: Two meters are not enough, says study

A study by a group of civil engineers in Belgium has found that maintaining a distance of 1.5 to two meters to avoid contracting coronavirus may be sufficient when standing still, but not when jogging or cycling. 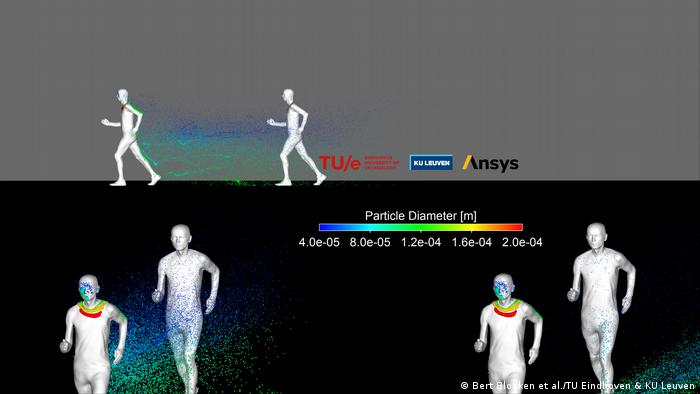 It is common knowledge that droplets of moisture exhaled by people infected with coronavirus fall to the ground in a short period of time. This has led authorities in many countries affected by the pandemic to recommend that people maintain a physical distance of at least 1.5 to two meters (4 feet 11 inches – 6 feet 7 inches) from all others.

This applies to people standing still, but what about when people are physically active? While restrictions are much tighter in some countries, in Germany, people are still allowed to take part in outdoor activities. A maximum of two people are allowed to train together, as long as they maintain the prescribed physical distance between each other. And this is where a new study by the universities of Leuven in Belgium and Eindhoven in the Netherlands comes in.

Bert Blocken, a professor of building physics and aerodynamics at both universities, led a team of scientists in a study that aimed to find out to what extent an athlete is exposed to the coronavirus when running or cycling in the slipstream of another. Blocken and his colleagues point out that they are not epidemiologists and have also defended their decision to publish their findings before going through a peer review.

They varied the positions of the walkers and runners, having one following directly behind the first, moving along side-by-side or following at a diagonal angle. Such models are usually used to analyze and improve athletic performance since, in many sports, following in the slipstream of the athlete ahead of you has a positive effect on speed and reduces energy expenditure.

However, following so close is not recommended during the coronavirus outbreak. 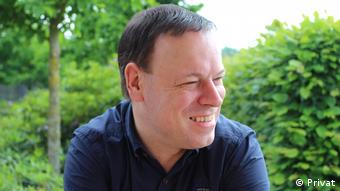 "When you walk or ride your bike and exhale, numerous droplets measuring only micrometers are emitted," Blocken told DW, explaining that for the purposes of the study, they were able to make the usually invisible droplets visible using a special light.

"We had two people walk and run to see how far the droplets traveled towards the other person. If you get too close to the other person, you will get their droplets in your face," he said. This means that the person following the first would stand to be infected, if that person had coronavirus.

Based on these experiments, Blocken and his team of researchers concluded that when taking part in sports, the 1.5-meter rule is not sufficient to protect against infection with the COVID-19 virus. Instead, they recommend a distance of at least four to five meters when walking in the same direction, 10 meters when running and cycling slowly, and at least 20 meters for faster movement.

According to Blocken, the safest thing is for athletes to move next to each other at the same speed, because the droplets they emit will land behind them. Diagonally offset, the risk of inhaling particles from the air breathed by the person in front is also lower than if one is directly behind the other. The risk of contamination is greatest when the person behind is directly in the slipstream of the person in front.

Blocken also recommends that a jogger or cyclist move to one side well before overtaking another person so as not to get into the other person's slipstream and droplets. But he said he had also observed another strategy while cycling around.

"Many people hold their breath when they overtake someone because they are afraid of the virus. Maybe that's a bit of an exaggeration," Blocken said. However, he likened the behavior to avoiding drinking from the same glass as an infected person. 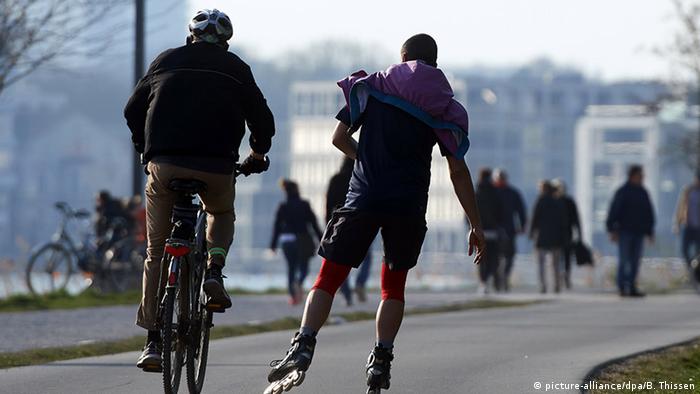 Blocken stresses that the intention of the release of the study was not to restrict outdoor sports, but to make it safer for athletes who want to continue to train outdoors.

"As long as you don't get too close to another person, there is no risk," he said.

The Belgian is also critical of France's decision to limit the permitted distance that an athlete can travel from his or her residence when cycling or jogging to one kilometer (0.62 miles) for a maximum of one hour per day:

"This decision was not very wise," he opined. "It means that in the cities everyone has to train in a very small area and are probably very close together. This is the opposite of what you should do. You should let people go out – preferably to the countryside, so they can keep their distance and not run into too many other people."

Blocken is an avid cyclist, but these days he says he is avoiding bike paths and instead riding on major roads, where, due to the coronavirus restrictions, there isn't a lot of traffic.

"I have never been able to cycle in such a relaxed manner and with so little traffic as I have for the past few weeks and months," he said.

Football: clouds of thousands of microdroplets

As far as football and other team sports are concerned, Blocken does not see how they can be played safely as long as the coronavirus outbreak lasts, especially when only applying the amount of physical distance between people as recommended by governments, something he and his colleagues say is insufficient when people are running around.

"I cannot make any statement about the risk of infection, but what is certain is that people who exert themselves will release clouds of thousands of microdroplets," Blocken said.

"Even if football players maintained a distance of 1.5 meters from each other, saliva droplets from opponents and teammates would get into their airways, onto their faces and bodies. And that's exactly what the 1.5-meter rule is designed to prevent."

Blocken concluded that if that, as long as this rule is applied, "not many sporting events will be possible."