Coronavirus: Are outdoor sports healthy exercise or a dangerous risk? 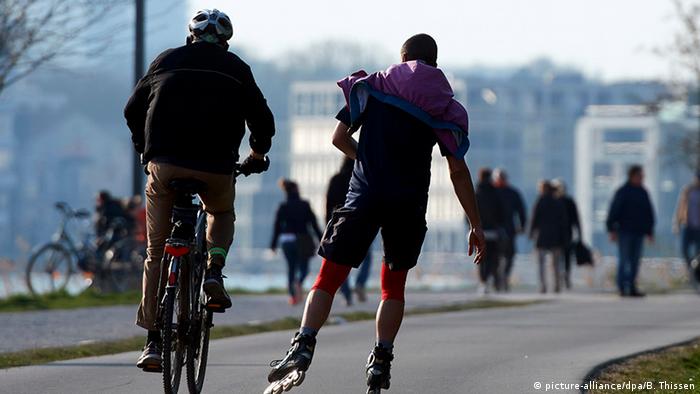 Picture the scene. It's a sunny afternoon in the German city of Bonn. A gentle wind blows over the River Rhine, creating ripples that reflect the glorious spring sun. For once, there is barely a ship to be seen traversing this great waterway, one of the busiest stretches in the world.

On the banks, however, there is a lot more going on. The Rhine Promenade is a hive of activity: walkers with buggies, inline skaters, joggers and cyclists jostle for position on the thin strip of asphalt that follows the river's course. Some are alone, some are accompanied by a companion, others are out with the entire family.

Most are following the advice of the authorities and keeping their distance from others, but sometimes there are just too many people and simply not enough space. On some stretches of the promenade, social distancing is all but impossible.

Scenes such as these are being replicated throughout Germany whenever the sun comes out. Parks and green spaces in major urban centers are bustling as if the coronavirus pandemic was never a thing. While there are no longer any larger groups sitting together or barbecuing in the sun, as was common before the crisis, there are still a lot of people out and about in public spaces.

The mild spring temperatures are proving too tempting and many want to take a break from working at home and stretch their legs or have some timeout from looking after the kids at home. And getting some exercise in the fresh air is supposed to be healthy, right?

Am I still allowed to do sports outside?

That depends on where you live. Around the world, the rules concerning social distancing are varied. In Spain, Italy, India and Israel, no one is allowed to venture outside at all, even if you want to go out for a run all on your own. Police are on the lookout for rogue runners or cyclists and promptly send them back home together with a fine for flouting the lockdown.

Some countries or regions, like Belgium and the German state of Bavaria, allow residents to exercise on their own provided they don't venture out too far away from home. Restrictions like that have got people's creative juices flowing. One Belgian cyclist from Kortrijk went on an epic 200-kilometer two-wheeled trek without even leaving the city by cycling down nearly every single street and lane. 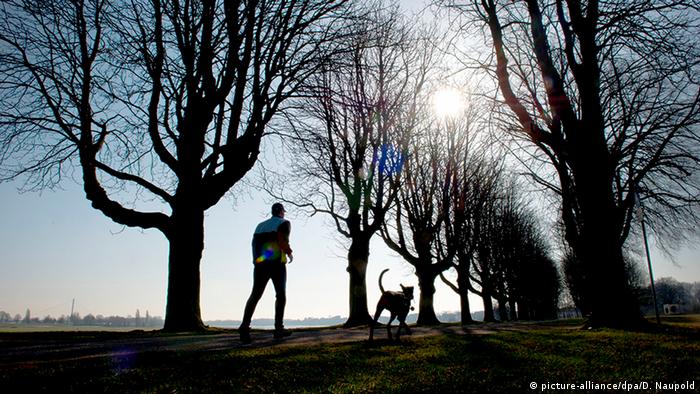 France and the United Kingdom have similar restrictions in place. In the UK, one form of exercise a day is allowed – for example, a run, walk or cycle – alone or with members of your immediate household. In France, people are allowed to go out and exercise, but they have to remain within a small radius of their homes.

In other countries, such as Switzerland, the Netherlands and Germany, exercise is seen as a means of maintaining a healthy lifestyle and remains permitted. In Germany, a maximum of two people are allowed to train together as long as they maintain a safe distance.

Group activities, on the other hand, are banned in many countries. Going to the gym, playing with the local sports team or taking part in a fun run at the weekend are seen as high-risk activities and strictly forbidden. In New York, an epicentre of the coronavirus outbreak in the United States, residents have only been advised – not ordered – to avoid contact sports like basketball.

Should I put sports on hold for the moment?

No. Sports and other physical activities are important to maintaining a strong immune system. Doctors say that people with strong natural defenses have a better chance of developing only mild symptoms if they happen to contract the virus. And since there is yet no vaccine or treatment for COVID-19, the body's own defences have to defeat it on their own.

But sports can help it win this battle. The World Health Organisation (WHO) recommends that adults should do at least 150 – or, better still, 300 – minutes of moderate-intensity aerobic physical activity each week in order to help combat the threat of heart disease, diabetes, high-blood pressure, cancer and depression. This advice is even more relevant during a pandemic.

"Sports are beneficial for your health, even now," Professor Jonas Schmidt-Chanasit told DW. The virologist from the Bernhard Nocht Institute for Tropical Medicine in Hamburg warns of "high-stress situations that could lead to a heart attack or a stroke" for those in self-isolation at home refraining from any kind of physical exertion.

Christian Drosten from Berlin's Charité Hostpital warns of further dangers in a podcast for the German public radio and television broadcaster NDR. He says: "It is important that people can do sports. Many find that sports provide mental stability when they put on their running shoes every two or three days and go out for a jog for half an hour or an hour." 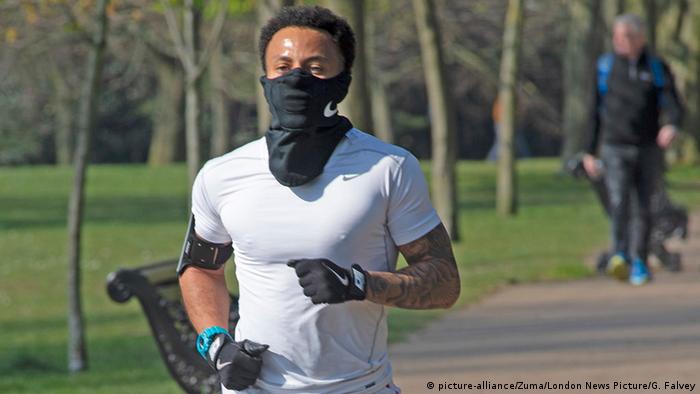 The fact that some states now prohibit outdoor sports suggests there may be a risk arising from them. It's true that sporting activities often lead to social contact – which should be avoided at all costs at this moment in time. What's more, people breathe more deeply during exercise in order to supply their muscles with much-needed oxygen. So is the cyclist or jogger panting a few meters away a virus risk? In the vast majority of cases, no.

"No one is at risk when jogging or taking a walk in the park alone. There is no danger at all," reassures Schmidt-Chanasit. The danger starts only when a large group of people spend a long time together in one place. Passing other people is no problem as long as the required distance is maintained, according to the Hamburg virologist. Also important: don't touch anything that many other people touch. For example, workout equipment in the park. And be sure to wash your hands after exercise.

Should I wear a breathing mask during sports?

If you've ever tried it, you would know: sports with a respirator mask is about as much fun as jogging while trying to hold your breath. If you need a lot of oxygen and you're sweating, a face mask will quickly limit your performance. But is this protection even necessary when doing outdoor sports?

"No," says the virologist Schmidt-Chanasit. "That would be over the top. There are no clouds of infection floating around outside in the park." If you're out in the fresh air and avoid large crowds, you don't need a mask, he says.

The situation is different when the law requires people to wear a mask. For example, people in Slovakia and Vietnam must cover their mouths and noses with masks in public, including when engaged in outdoor sports. 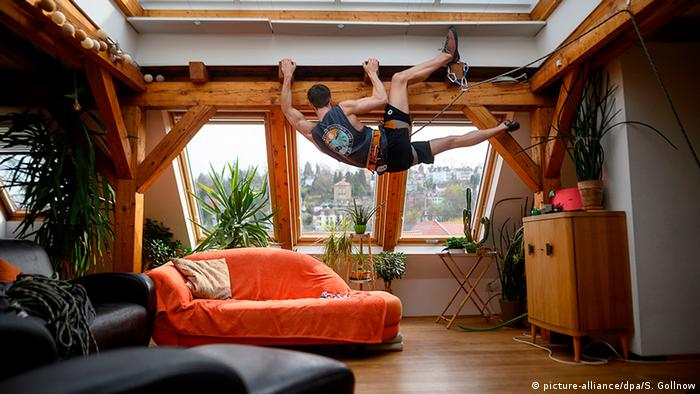 Where should I do sport now?

In a nutshell: at home or in places where there are only a few people. A fitness course on YouTube, jogging in the empty, early-morning city or mountain biking in the forest are still possible and indeed advisable in regions where there is no strict curfew. In the opinion of almost all virologists, the essence of the measures being taken against coronavirus is avoiding direct contact – not avoiding exercise.

It's a problem though when everyone does the same thing. Dozens of individual athletes find themselves on narrow paths and there's no space for the necessary distance – as we observed by the River Rhine in Bonn.

Scenes like that have prompted a response from politicians. "At the moment, it's still a risk if too many people get together and go jogging, even if they originally started out from home on their own," warns Dagmar Freitag, a political from the Social Democrats who chairs the sports committee in the German parliament.

"In the interest of those who aren't in such robust health, we would all do well to follow the current restrictions. Nobody gets ill just because they go jogging a little less often for four weeks," Freitag said in an interview with DW, pointed out that people in Germany still enjoy a relatively large amount of freedom compared to other countries.

Now it's up to everyone to act responsibly in the interests of society as a whole.