The displacement of Christians risks safety in the Middle East and Europe, Pope Tawadros II has told DW. The head of the Coptic Orthodox Church was in Germany to inaugurate a place of worship for the growing community. 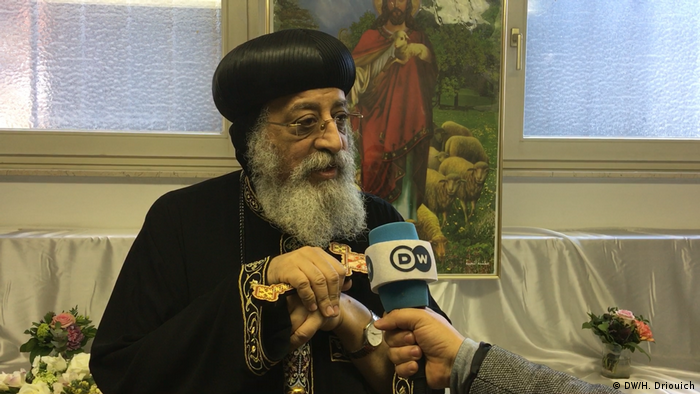 DW: What is the significance of inaugurating a new Coptic church in Düsseldorf?

This church was gifted to the Copts by Catholic Cardinal Rainer Maria Woelki. Why is this significant?

The number of Copts arriving in Germany is not very great, but it is increasing. In recent years, the number has possibly reached 1,000 families. There was a need for a bigger place, and due to [lacking] financial resources at the Coptic Church, the Catholic Church offered this place to become a Coptic church where all Copts can gather.

In recent years, Copts in Egypt have been the victims of terrorist attacks on a continuous basis. What are conditions like for Egyptian Copts today?

Things are getting much better. In Egypt there are now two major battles: one against terrorism and another for development. The battle against terrorism has come a long way. On the other hand, the terrorist attacks that take place not only target the Copts, but also the armed forces and the police, and Egyptians in general. However, what the Egyptian armed forces are doing against terrorism is huge and admirable, and I expect this battle will be over soon.

What is your message to Egyptian Copts living in Germany?

Copts who came here came to a new homeland and a new environment. The church tries to preserve their ties and attachment to their homeland, Egypt, and also to the Coptic Church as the mother church. In general, when Copts leave Egypt and go to live in another country, Egypt remains in their hearts. So, there is a strong link between all Egyptian Copts in different parts of the world.

My words to them are: Live in the society in which you are, integrate into it, enjoy all the advantages of Western civilization and German society. Learn the language, because it is a very important matter, but do not forget the Arabic language, because it is also of great importance, and always keep the Coptic traditions you learned in Egypt. Love everyone, establish good relationships with everyone, because in the beginning and in the end, a human remains a human.

Read more: How Jews, Christians and Muslims exchanged knowledge for a millennium

Middle Eastern Christians have been recently subjected to displacement. Some Western countries have received many of them. Do you believe Christians should stay in their home countries and contribute there to improving their situation, or do you encourage them to emigrate?

Egyptian authorities have arrested thousands in a crackdown on dissent, even its most benign forms. And some former prisoners are finding that they are not really free despite having been released. (26.04.2019)

The recent constitutional referendum gives the authoritarian Egyptian president unprecedented political power. But can el-Sissi return the country from regional muscle to leading light of the Arab world? (29.04.2019)

A police officer was killed and two wounded in an explosion outside a Coptic church near Cairo. The attack comes less than two days before Egypt's Christians celebrate Coptic Christmas. (06.01.2019)