Cooking for gold: How the German team prepares for the Culinary Olympics | Culture| Arts, music and lifestyle reporting from Germany | DW | 27.06.2019

Cooking for gold: How the German team prepares for the Culinary Olympics

DW went into the kitchen to learn how the German team aims to win next February at one of the world’s most prestigious cooking competitions. There’s much more to German cuisine than meets the eye. 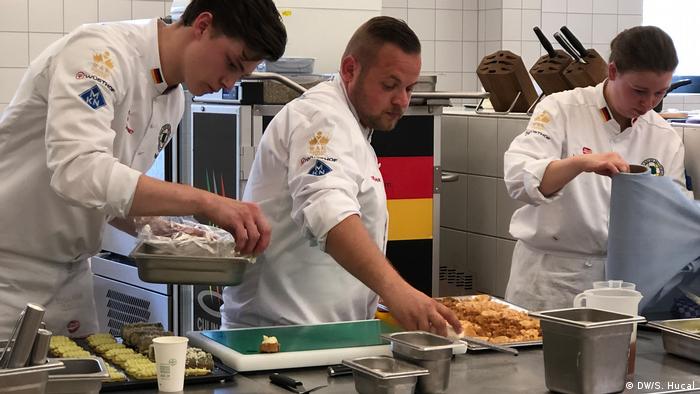 In February, the team will have six hours to prepare a three-course meal for 110 people

Instead of volleyball or gymnastics, teams compete in categories titled "Restaurant of Nations" and "Chef's Table" during the IKA/Culinary Olympics, which will take place in Stuttgart in February 2020. Joining forces on national teams, 2,000 chefs from all over the world will prepare ambitious dishes to find out who can serve the world's tastiest cuisine.

The event takes place once every four years as it has since the first edition in Frankfurt in 1992. The Singapore national team is the current reigning champion after taking home the gold in 2016, while the German national team came in seventh. Will they have what it takes to slide into first this time around?

On a sweltering Tuesday in Potsdam, DW caught up with the 15-member German national team and the junior division for chefs aged 25 and under, as they raced around a kitchen at Filmpark Babelsberg during a test run of the three-course meal and buffet service they aim to perfect come February.

The two competition categories test the national team on various skills. In the "Restaurant of Nations" category, chefs prepare a three-course menu, while "Chef's Table" is in essence a gourmet buffet, consisting of seven different dishes for 12 people, from cold dips to petit fours.

Although temperatures in Southern Germany aren't expected to be hot mid-winter, team manager Ronny Pietzer told DW that the current heat helps the team prepare for future competitions in countries such as Singapore or Bangkok.

Inside the kitchen, chefs raced to prep and plate food for the 55 guests who had been invited to dig into the test meal. During the real event, the culinary professionals must serve 110 dishes in only six hours, a relatively short amount of time for the task at hand.

"Our national team is a little bit like a sports team," explained Aina Keller the teams' press representative. The chefs work at various restaurants around the country, volunteering their time to compete representing Germany at competitions around the world.

Some even come from abroad. Last November while competing at the culinary world Olympics in Luxembourg, the team approached a talented Italian pastry chef and asked him to consider switching from the Italian team to the German team. He obliged.

"You find somebody, and if he or she fits on the team, we take them, no matter where they come from. Twenty years ago, I think we had all Germans on the team," said Keller.

The team captain, Jacob Tracy, in fact hails from Michigan in the USA, and has been living in Brandenburg for 15 years after meeting his German wife in the States. Tracy is eager to point out that there is more to German cuisine than what people outside of the country may have in mind. 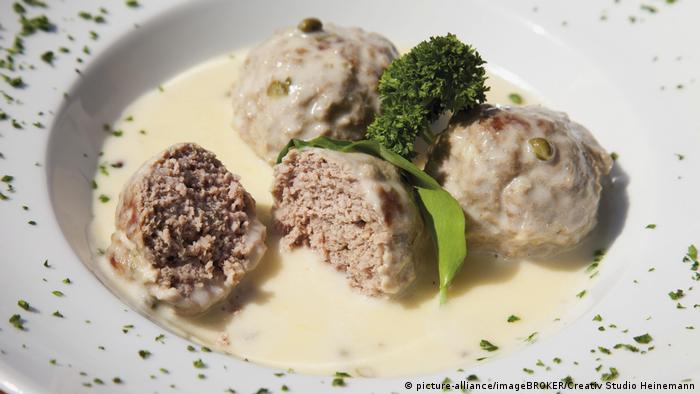 There's more to German cuisine than meets the eye. Some famous German dishes, such as Königsberger Klopse, meatballs with caper sauce, are virtually unknown outside of Germany

German cuisine often combines sweet and sour flavors in a way that most would attribute to Asian food, not northern European fare, he points out. Königsberger Klopse, a Prussian specialty of meatballs in white sauce with tangy capers, is one such example. "I make it every time I go home to my parents' house and that's something that amazes them as Americans; something they have never tried before."

"When people think of Germany they think of sauerkraut and bratwurst but it really is a very delicate cuisine, especially here in Brandenburg and this area of Berlin and Brandenburg," Tracy added.

"Cooking privately at home on a high level is getting popular in Germany" said Keller, and finding quality ingredients is the most important part. "Cooking is kind of easy but the product is the thing that at the end is important. Germans are now discovering that," she said.

Yet selecting quality ingredients is nothing new for the German national team. After months of deliberation, they decided on a menu using many locally sourced ingredients from fishermen, hunters and small gardens, to name a few places.

Tracy's wife's honeybees even played their part in the menu, which cannot be described in greater detail, lest any competitors read this article. The team also focuses on presenting seasonal dishes, which means they will have to get creative with German winter vegetables if they want to take home the gold.

Practice makes perfect and test runs like these are essential if they want to do well next February says Tracy. Although it's hard work and a significant time commitment, he wouldn't have it any other way. "None of us get paid to do this, so you know 100 percent that everybody here is passionate about this job, about cooking" he said before dashing off to give his team a hand.