Convincing Australians that bats aren′t so bad | Environment| All topics from climate change to conservation | DW | 25.06.2015

Ebola, rabies, Marburg - fruit bats carry a lot of dangerous viruses, which makes them unpopular. But bats provide an important contribution to the ecosystem - so some people are trying to save as many as possible. 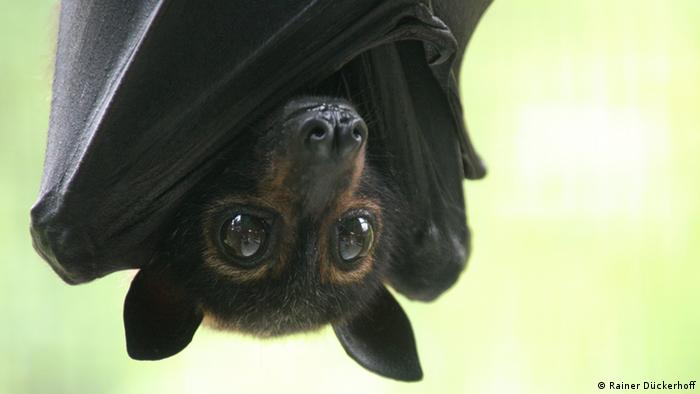 "Fruit bats are a pest. They defecate on your car at night."

A middle-aged worker on a campground near Cairns in northeastern Australia is sweeping the kitchen floor, complaining. "And don't forget that fruit bats are full of diseases and can pass them on to humans."

Many Australians might agree. Flying foxes - the native fruit-eating bats living on the east coast of Australia - are not too popular here.

This is partly because of the diseases they can carry - and partly because they eat fruit from orchards meant for people. They particularly love mangoes.

Some orchards owners even shoot fruit bats. This is legal in Queensland since 2012, even though the current government announced it intends to change the law soon.

"In Australia, everybody loves koalas, so the koala [conservation] people get all the money," says conservationist Jenny Maclean. 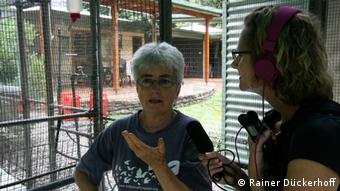 For more than two decades, Jenny has been campaigning for the furry animals. She heads the Tolga Bat Hospital in Atherton near Cairns.

Depending on the season, her hospital can house several hundred flying foxes. Upon visiting, they can be seen hanging upside-down from the ceiling in a walk-in enclosure, examining their visitors with huge, moist eyes.

"Fruit bats are delightful to work with," Jenny says. "They are social animals, and they always turn to look at you."

Every year, hundreds of fruit bats die in Australia due to a paralysis tick, which is common along the east coast of Australia.

Paralysis ticks produce a strong neurotoxin. While the tick is sucking blood, its poison enters the body of the fruit bat. After a while, the animal can no longer move its hind legs, drops to the ground - and dies there.

Many of the fruit bats that have died in this way leave behind pups that are completely helpless. Jenny takes in the pups, and raises them until they are big enough to manage on their own. Then she sets them free in the forest.

Jenny teaches the bat babies to drink milk from pet drinking bottles hanging at the ceiling. Later, they get a lot of fruit.

Jenny and her volunteer workers hang up about 40 kilograms of apples and 60 kilograms of bananas each day in the enclosures - stuck onto wires or blended into pulp. With a bevy of chirping, the fruit bats finish off all of it. Hundreds of flying foxes sure do eat a lot!

Barbed-wire fences are a threat

Many fruit bats - as well as regular smaller bats - end up in Jenny's hospital after they got caught in barbed-wire fences. They often tear the skin of their wings, and are then no longer able to fly. This particularly happens on windy, rainy nights, Jenny says. 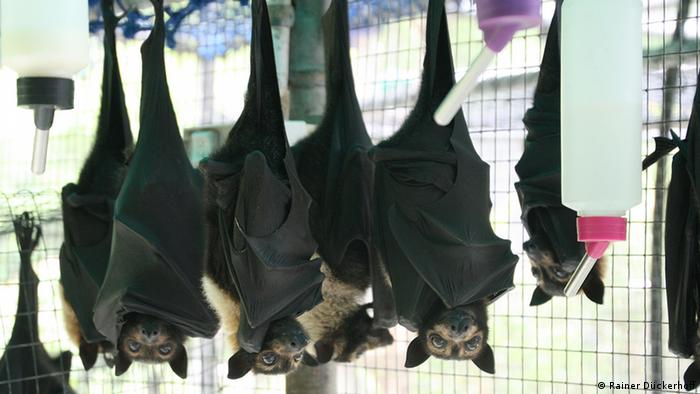 Jenny has hung up pet drinking bottles for the young flying foxes, which need milk

Conservationists have therefore been urging people to not use barbed-wire fences in their fields. Bats can also get entangled and hurt themselves in bird netting, if its mesh is too big.

Despite dangers to fruit bats from paralysis ticks and barbed-wire fences, "the biggest danger for fruit bats is the negative public attitude toward them," Jenny says.

Fruit bats indeed carry diseases that are dangerous for humans.

The Ebola epidemic in West Africa was likely caused by fruit bats. Scientists believe that a villager in Guinea caught and slaughtered an infected fruit bat, allowing the virus to cross the species barrier to humans.

In Australia, fruit bats act as disease reservoirs for the Hendra virus, which causes a potentially deadly flu-like illness in horses and humans. 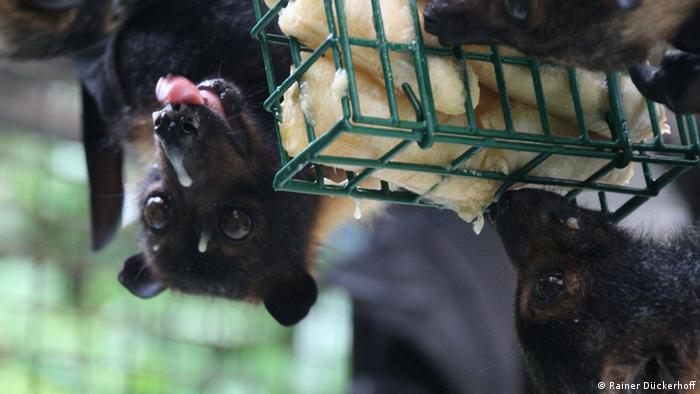 Chinese scientists reported in 2013 that bats have turbo-charged immune systems.

Bats don't get sick even if they catch such viruses. But the viruses can multiply inside their bodies - and could potentially jump over to humans.

So some precaution when handling bats is a good idea. Conservationists warn the public not to touch wild bats.

But in the end, bats are not as dangerous as they might seem. In Australia for example, humans cannot catch Hendra virus from a bat - only from a horse.

All volunteers in Jenny's hospital have to be vaccinated against rabies. "Otherwise, you'd just use good hygiene standards you'd have around any animal," Jenny says.

Bat protectors like Jenny have their work cut out for them - like convincing the campground worker near Cairns.

They don't earn wages, but farmers need them: bees. A study has found that wild bees provide crop pollination services worth billions. But not all conservationists will like the study's implications. (17.06.2015)

The outbreak of the Middle East Respiratory Syndrome virus (MERS) in South Korea has left 16 dead and infected dozens more. (15.06.2015)