This year, companies in the US will begin composting human remains. But a Colombian start-up is already returning deceased pets to the cycle of life. 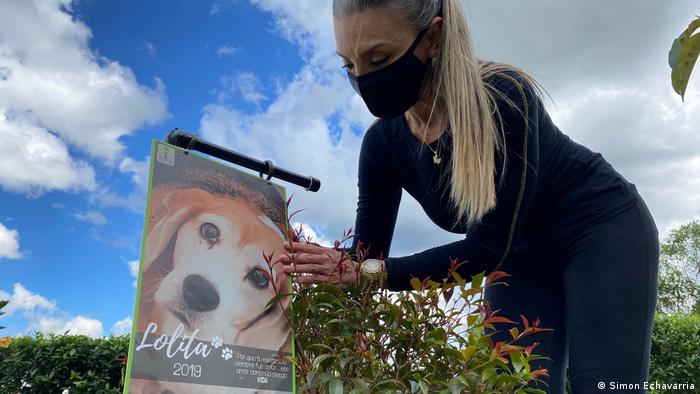 Doris Sanchez visits a small tree planted with the remains of her dog, Lolita, at a memorial garden outside Medellin run by pet composting company Pleia

Doris Sanchez brushes fallen leaves from the ground at the foot of a little bush with reddish leaves. Next to it hangs a photo of her beloved beagle, Lolita, who died of a heart attack last year. The plant, a Eugenia, carries more than just memories of her late four-legged friend.

It is one of about a dozen young trees and shrubs clustered around a large greenhouse on a hilltop a short drive from Medellin in Colombia. Inside, the remains of other pets are being composted in neatly aligned compartments filled with soil and wood chips.

"It's a little bit sad to come here, because we still miss her," Sanchez says. But the memorial garden, with commanding views of the surrounding Andes, is also a place for reflection. "It's comforting to see how this tree is growing and how Lolita's remains are now generating life," she says.

In most countries, pet owners can have their deceased animals cremated or buried when they pass away. But since 2017, Pleia in Medellin has been one of a handful of companies around the world to compost dead pets and use their remains to grow trees and plants.

It's a way of dealing with death that could be better for the environment and will soon be available for some human remains. 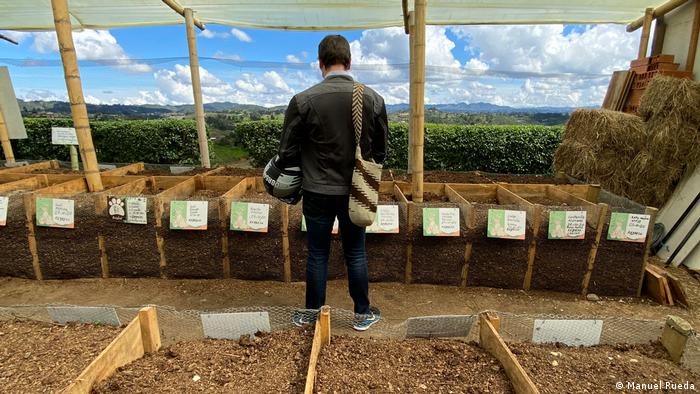 A Pleia customer visits the company's greenhouse to learn about pet composting. The bodies are buried separately in piles of soil and wood chips

"When you cremate a body, you burn fossil fuels and emit carbon into the atmosphere," explains Daniel Correa, co-founder of Pleia. "And when you bury a body you can contaminate underground water sources."

Studies have shown that human burials can contaminate groundwater with pathogenic bacteria and chemicals like formaldehyde. Some coffins also pollute the soil with varnishes.

But composting means mortal remains can instead be "a source of nutrients that can feed a new cycle of life," Correa says. Central to Pleia's concept is to change attitudes to death by not "perceiving the body as something that you need to get rid of."

Farmers in the United States and Europe have been composting dead livestock for several years now to reduce disposal costs, burying them in large piles of wood and soil for several weeks until their remains decompose.

But composting is still new for pet funeral companies. Pleia — named after a constellation of stars — is the only company in Colombia to offer the service.

Workers bury dead pets separately in rectangular piles of soil and wood chips about 90 centimeters (35 inches) long. To speed up decomposition, the bodies are first doused with a transparent liquid that contains bacteria cultivated at Pleia's own facilities.

Wood chips help absorb bodily fluids, Correa explains, and the warmth inside the greenhouse and soil enable the bacteria to "do their job."

The soil also keeps bad smells from emerging, and workers only need to check the piles occasionally to see how fast the corpses are decomposing. It takes about two months for a dog or cat to turn into compost.

From pet to pot plant

Correa founded Pleia with fellow veterinarian Melissa Naranjo after the pair collaborated on a university thesis that investigated sustainable options for disposing of animal corpses. 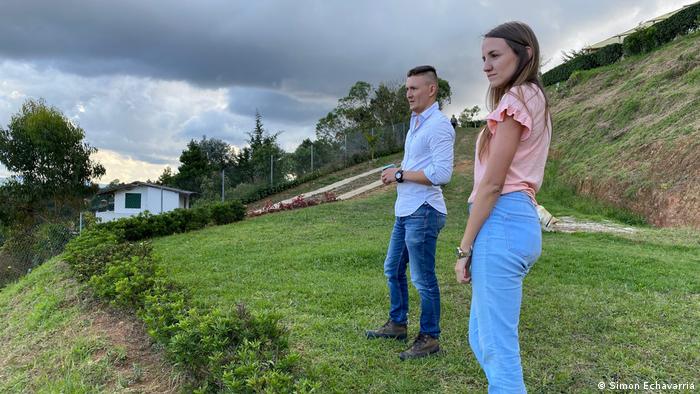 "This was our thesis project at university, but we wanted to give it real-life use," says Correa, who graduated from the CES University Medellin with a degree in veterinary medicine in 2015.

The company now has 10 employees and says it's picking up around 200 animals each month in Medellin, charging customers between $50 (€40) and $150 to compost them. Prices vary according to the type of service and the weight of the pet.

Customers can have the remains of their pets used to grow trees at Pleia's memorial garden, or they can buy potted plants fertilized with their pet's remains, which are then delivered to their homes.

The second option is by far the most popular, which is why the peaceful garden still has only a small collection of trees. But it also hosts group therapy session for bereaved pet owners. These are run by Jorge Zapata, a psychologist who specializes in grief.

"We know that pets have become increasingly important members of families," Zapata says. "What we are trying to do is to give these pets a send-off that reflects the importance that they had to these families during their lives." 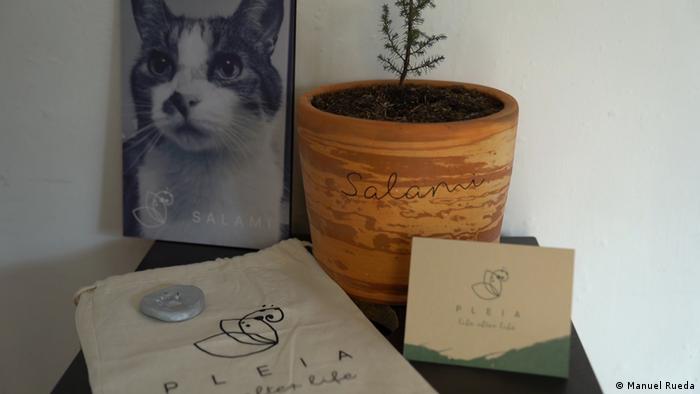 Ready for delivery at Pleia's offices, each pot carries the name of the pet whose remains fertilize the plant inside

Composting human remains will soon be an option in at least one US state. In 2019, Washington became the first US state to legalize human composting — or "natural organic reduction" — following lobbying by Recompose, a company that's pioneering the process, and which it says saves around 1 ton of CO2 compared to burial or cremation.

Recompose charges $5,500 for its human composting service and gives customers the option to pay long before their death in monthly installments. The price includes delivery of the — decomposed — remains of customers to their families or to a nature reserve in Washington state, where they will be used to grow trees.

Recompose says 300 people have already signed up for its composting plan. It is reportedly one of three companies that will begin offering the service in Washington this year. Legislators in Colorado and California are also considering legislation to allow human composting.

Correa believes the practice will be possible in Colombia one day, too. But for now, Pleia plans to expand pet composting to two more cities next year, and eventually hopes to bring the service to other Latin American countries.

"We believe we can make the world a better place with these sustainable practices," Correa says. "And we want to give our pets the chance to create life, even after they are gone."

Grave site apps and tombstone QR codes are taking cemeteries into the 21st century — and keeping alive memories of the deceased, particularly those of dearly departed celebrities. But some worry about data privacy.

Whales, chimps, dogs - animals seem to suffer when they lose a beloved companion or offspring. Do animals understand death, and do they grieve like humans? Or are we just projecting our understanding on their behavior?