The second mass shooting in under a week is putting pressure on Biden act on gun control. However, getting reform passed will be an uphill battle. 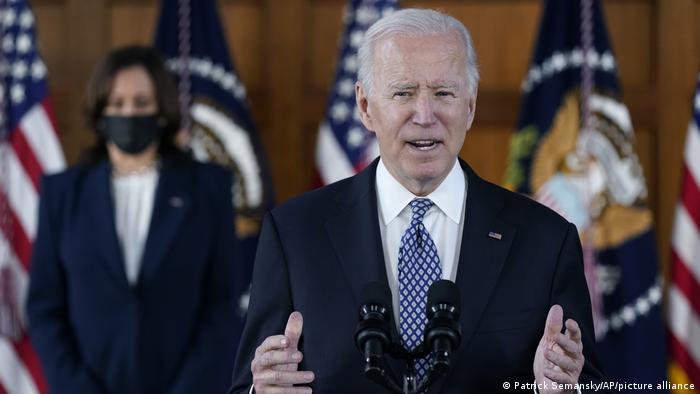 Biden addressed the nation after a shooting last week in Georgia

US President Joe Biden gave a televised address on Tuesday, urging lawmakers to act on passing tighter gun control measures following a deadly shooting at a supermarket in Colorado.

Ten people were killed when a gunman opened fire on shoppers in a supermarket on Monday, the latest in a string of deadly mass shootings in the United States.

Biden said "assault weapons should be banned" in the US, along with closing loopholes in background check systems.

"I don't need to wait another minute, let alone another hour, to take common sense steps that will save lives in the future," Biden said.

In addition to a ban on assault weapons, the US president said that high capacity magazines should also be banned.

"This is not and should not be a partisan issue. This is an American issue. It will save lives. American lives. And we have to act."

During his presidential campaign, Biden vowed to push through gun control measures, although it remains to be seen whether he will be able to garner enough support in Congress.

Democrats to push for legislation

Following the latest shooting, the highest-ranking Democrat in the Senate, Majority Leader Chuck Schumer, vowed to bring gun control to a vote in the chamber.

Specifically, he said he would push to have  vote on a bill already passed by the House of Representatives that would require background checks for most gun sales.

Gun control measures are notoriously difficult to pass in the US, with many congressional Republicans and the powerful pro-gun advocacy group, the National Rifle Association voicing opposition to restrictions.

The bill recently passed by the Democrat-controlled House of Representatives is unlikely to succeed in the Senate. At least nine Republican Senators would need to vote in favor.

What we know about the shooting in Colorado

Police on Tuesday released further information about the deadly shooting that took place at a supermarket in the city of Boulder, Colorado.

A total of 10 people were killed in the shooting on Monday at a King Scoopers store, including a police officer. The victims ranged in age from 20 to 65.

The suspected gunman was identified as a 21-year-old man who was from the Denver suburb of Arvada. He has been charged with 10 counts of first-degree murder.

Authorities said the suspect purchased the assault rifle used in the attack just six days before the shooting took place.

The store's employees told investigators that the suspect shot an elderly man outside the store before going inside.

The shooting also came less than a week after another gunman killed eight people at several spas in the city of Atlanta, in the southern state of Georgia. Six of the victims were women of Asian descent, sparking national outrage over a rise in anti-Asian violence.

The killings have reignited calls for gun control in the US. Tighter restrictions on guns are popular with most Americans, several opinion polls and surveys have shown.