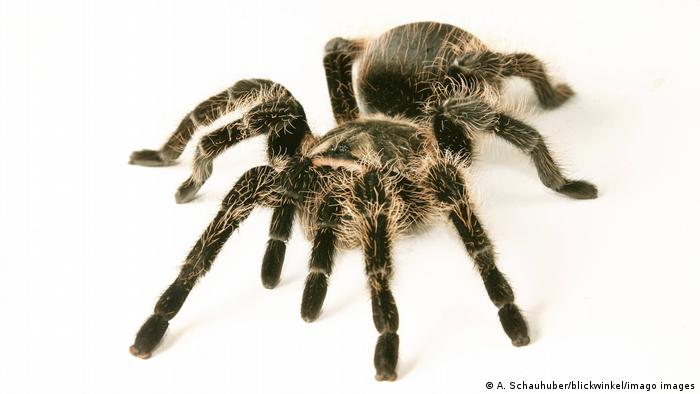 The Germans allegedly lacked permits to collect the tarantulas

Colombian authorities seized hundreds of spiders allegedly being smuggled to Germany on Thursday.

The containers were being carried in a suitcase.

The two claimed that they were transporting the creatures for academic purposes, but lacked permission or permits, according to authorities.

The arthropods were collected in the municipality of San Luis de Gaceno, in Boyaca, according to a statement released by the ministry.

The ministry released a video of the find on YouTube, and published photos of the alleged smugglers with their backs turned to the camera.

"This is the second case in less than three months in which wild animals have been seized at El Dorado airport. During this year we have already recovered more than 11,000 specimens throughout the city. Once again, wild animals will always be better off free and at home," Bogota's environment secretary, Carolina Urrutia said, in a post on Twitter.

The animals were transferred to a government center where experts assessed the find and whether they could be released.

Earlier this year, two Germans, one Polish and one Venezuelan were caught allegedly carrying nine tarantula specimens out of Colombia and charged.

The Goliath birdeater is like something straight out of a horror movie. Still, the biggest spider in the world has a softer side as well.

Eating a fried tarantula has become a popular photo opportunity for tourists in Cambodia. However, this delicacy is in danger of disappearing, thanks to deforestation and over-harvesting of the spiders.

Airlines are notorious for evading their obligation to compensate delayed passengers, and this time they're blaming a spider. A German court is ruling on whether the hairy arachnid can be blamed for a flight delay.