The 2009 collapse of Cologne's archive killed two people, destroyed innumerable historical documents and caused millions in damage. Over nine years later, a court found that the builders were largely not to blame.

A district court in the western German city of Cologne acquitted three people on Friday who were charged with negligent homicide for their role in the collapse of the city's archive building in 2009.

A fourth defendant was handed a suspended sentence of eight months. The defendant is part of the construction management department of the city's public transportation operator KVB, which was overseeing the construction of a new subway line in front of the building at the time of the accident.

After a years-long investigation, prosecutors said that the faulty construction of an underground station was to blame for the collapse, which killed two people and caused more than €1 billion ($1.1 billion) in damage.

Of the defendants who were found not guilty of negligence, one is also a KVB worker while the other two are from private construction companies that were working on the subway tunnel.

Presiding judge Michael Greve said the cause of the building's collapse was "clearly and without a doubt" caused by a serious error in the construction of a diaphragm, or slurry wall, in the new subway station. He said that this was the sole cause of the accident and that nothing else was to blame.

In the case of the the three acquitted defendants, "no breach of duty" could be proven, Greve said, adding that the court was certain that nobody intended for the building to collapse.

The judge added that he was aware that Friday's ruling would "possibly cause a certain lack of understanding" with the public, but that they could not make a ruling based on public outcry.

Prosecutors had argued that the defendants had not monitored, documented or communicated about the construction work in front of the building as was required. They'd previously called for three of the four defendants to receive suspended sentences.

"The accident could have been prevented," Cologne public prosecutor Torsten Elschenbroich told the court in late September. 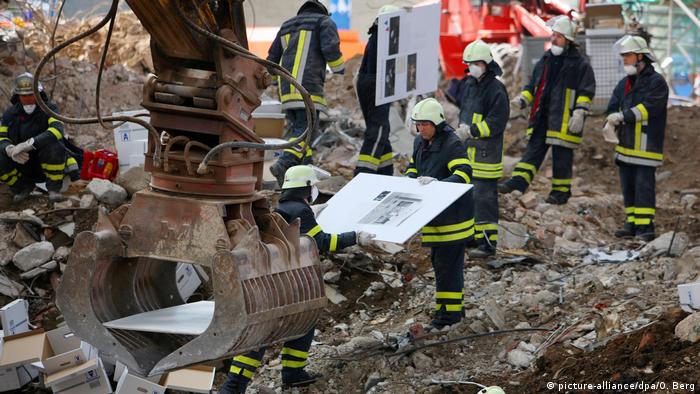 Firefighters, first responders and volunteers attempted to recover the archive's historical documents after the building's collapse

The collapse of the city's archive building in March 2009 killed two people in neighboring apartment buildings who were buried underneath the rubble.

Investigators said that a flaw in the slurry wall of one of the subway station tunnels caused so much gravel, sand and water to flow underneath the city archive, that the building's foundation crumbled beneath it.

The shocking accident also damaged tens of thousands of historical documents in the archive, whose collection was originally started in the Middle Ages. Prior to its collapse, the building housed Germany's largest municipal archive.

First responders and volunteers were able to recover almost all of the documents that were buried in the mud and water of the collapse, but many were severely and irreparably damaged. Work to restore the documents that can be salvaged is still ongoing.

On March 3, 2009, the Cologne city archives suddenly caved in on itself, killing two people and destroying countless historical documents. Nearly 10 years later, a court will rule on who was at fault for the catastrophe. (14.01.2018)