The collapse of the Cologne city archives left two people dead and buried thousands of documents - some of which dated from the Middle Ages. Public prosecutors are considering pressing charges. 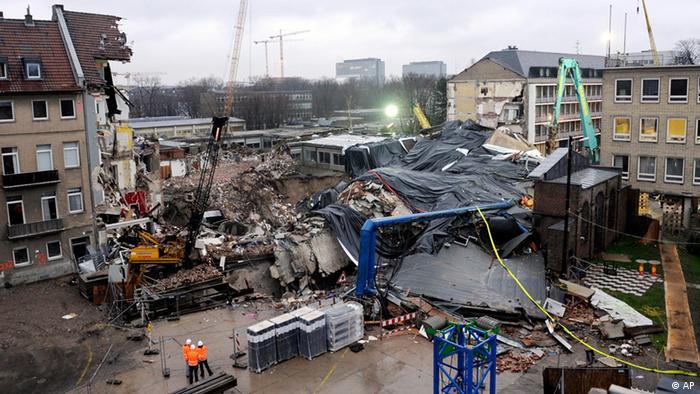 Cologne's Public Prosecutor's Office on Thursday revealed the findings of a years-long probe into what caused the city's archives building to collapse in 2009.

As was long expected, mismanagement and faulty construction of a metro line beneath the old city center was found to have led to the building's collapse. More specifically, a flaw in one of the underground diaphragm walls had caused so much water, sand and gravel to flow beneath the archive that it eventually caused the building's foundations to crumble and wash away.

The collapse of Germany's largest municipal archive led to two deaths and damages of more than 1 billion euros ($1.1 billion).

A speaker for the prosecutor's office said that it would "very swiftly" decide whether to press ahead with charges against some 100 people it has held potentially responsible for the incident, all of whom were involved in building the metro line. Cologne's prosecutor would need to act quickly, however. By law, charges can only be pursued up to 10 years after the incident.

Should the prosecution go ahead, suspects would likely face charges of homicide and hazardous building practices.

Civil proceedings against the suspected guilty parties are also expected to run in tandem with the criminal case.

Read more: Restorers rescue windows to the past

Controversially, no executives from Cologne's KVB transport company have been implicated in the collapse, despite the firm functioning as chief supervisor of the whole metro construction project before the archive building collapsed.

The archive building contained around 65,000 documents connected to the city's history, with some of the material dating back to the year 922. Amongst the treasures buried in the rubble were papers left by the composer Jacques Offenbach and the postwar writer Heinrich Böll.

Parties tasked with uncovering the cause of the collapse were forced to delay their inspection for more than six months after the collapse, unable to move forward until all of the buried archive materials had been salvaged.