Germany coach Joachim Löw has dropped striker Max Kruse from the squad that will play two friendlies this month. Löw said the Wolfsburg player acted in an "unprofessional manner" after a couple of recent incidents. 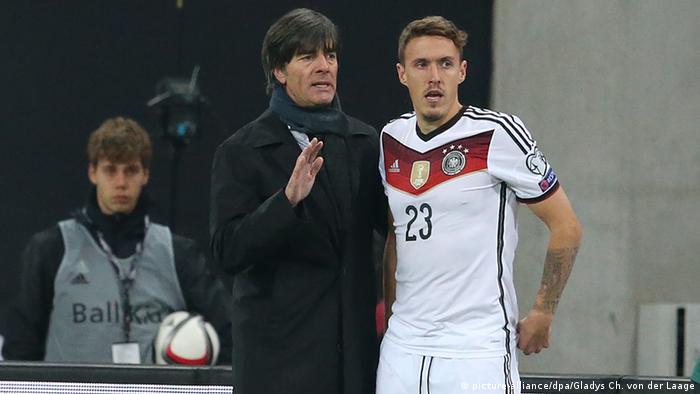 A statement posted on the German football association's (DFB) official website on Monday stated Löw had decided to drop Kruse from the national team for the friendly matches against England in Berlin on Saturday and against Italy in Munich next Tuesday.

The statement said that the coach's decision had come as a direct result of an incident that occurred in Berlin on Saturday night, when Kruse was celebrating his 28th birthday.

Löw said he had used a conversation with Kruse last week to make clear exactly what he expected of him on and off the pitch and the latest controversy was not in keeping with the coach's expectations.

"Max has repeatedly acted in an unprofessional manner," Löw said.

While the decision only officially applies to the two upcoming friendlies, Löw hinted that Kruse has also hurt his chances of being part of the squad that travels to France for Euro 2016 in June, noting that the national team has set itself "lofty goals."

"We need players who are focused and concentrated and aware of the fact that they are role models," Löw said.

German newspaper "Bild" first reported the incident that occurred at Kruse's birthday party on Saturday. The report said Kruse had snatched the mobile phone from one of its female reporters who was at the party and had taken pictures of him. It then alleged Kruse proceeded to delete the pictures from her phone.

Kruse, though, apparently didn't know that he was dealing with a journalist, and only found out when he was ordered to a meeting with Klaus Allofs, the sporting director of his club team, Wolfsburg, on Sunday morning. According to "Bild," Allofs imposed a fine of 25,000 euros ($28,000). The club has yet to confirm this report.

The incident comes just a week after a report that Wolfsburg had fined Kruse for having forgotten 75,000 in a Berlin taxi on an early Sunday morning last October.