The Wolfsburg striker has made the headlines for the wrong reasons this week, starting with a fine for leaving thousands of euros in a taxi. Now there is a report that the club has chided him about a breakfast habit. 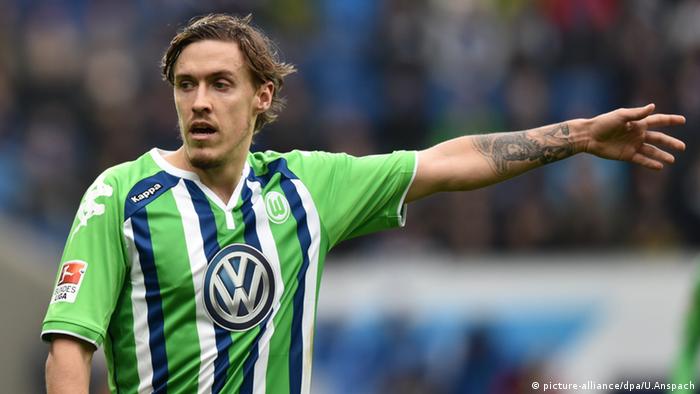 Wolfsburg striker Max Kruse just can't seem to get a break lately. A day after the news broke that Wolfsburg had fined the Germany international over a curious incident that occurred last autumn, the mass-circulation newspaper "Bild" reported that the club's management has also had a serious word with him about his preferred breakfast spread.

According to "Bild," both Wolfsburg's sporting director, Klaus Allofs, and head coach, Dieter Hecking, called the 27-year-old Kruse into a meeting during the club's winter training camp in Portugal to discuss what is said to be his morning Nutella habit. The report said that Allofs and Hecking both urged the apparently sweet-toothed striker to lay off the sugar-rich cream when spreading it on his breakfast rolls.

This report, however, remains unconfirmed.

"This sort of thing is dealt with internally, I am not confirming this," Allofs told the paper. "We speak with all of our players every six months. The aim is to support them in such a way that will put them in a position to deliver their optimum performance."

At the same time, though, "Bild" quoted Allofs as saying that "Max needs to correct a few things."

This comes a day after the news that Allofs had imposed a fine on Kruse, who is known to be a keen poker player, for having forgotten 75,000 euros ($83,100) in the back of a Berlin taxi on an early Sunday morning in October.

For reasons that remain unclear, though, Kruse didn't see fit to report the loss to the police until last month - which led to the incident eventually becoming public knowledge. Needless to say, Allofs, a former national team striker himself, was not amused.

"Some people would have never seen so much money in their lives and certainly not in cash," Allofs was quoted by "Bild" as saying. "There was a conversation between Max, myself and our coach and he has been fined. We explained to him what kind of behavior we expect from our players in their free time in public. I can only hope that this is a lesson for him and he will change his behavior somewhat."

Kruse is reported to have been fined 25,000 euros for his actions, although Allofs did not confirm the amount.

It's not clear if or how the incident could affect Kruse's chances of making Joachim Löw's Germany squad for this summer's Euro 2016 tournament in France. The striker has scored four times in 14 appearances for Germany, but was not a member of the squad that won the 2014 World Cup in Brazil. Kruse will be hoping to make more positive headlines in the final few weeks of the season.