With the king penguin's food supply being driven farther and farther away, the birds must choose between feeding and breeding. The penguin's plight sends a warning about the future of the Antarctic's environment. 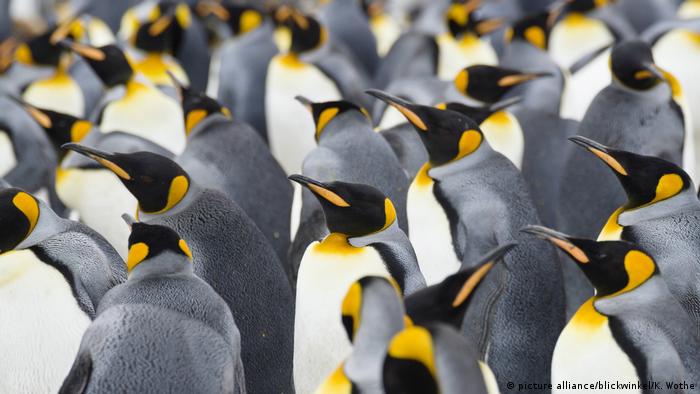 A study published on Tuesday by the journal Nature Climate Change found that Antarctica's king penguins must relocate or face extinction.

Under current conditions, 70 percent of today's 1.1 million king penguin breeding pairs would have to resettle or could disappear before the end of the century, the study said.

King penguins, who breed on specific isolated islands in the Southern Ocean, make round trips of more than 600 kilometers (373 miles) in the hunt for fish and krill in the Antarctic waters. While they are away, their chicks go without food for up to a week at a time.

As the oceans warm, the Antarctic Polar Front, a nutrient-rich area where king penguins hunt, is being pushed further south.

This shift means adult penguins will have to travel farther and farther away from their nests in order to find food, leaving their offspring hungry for longer.

The flightless king penguin lives in Antarctica and is the second-largest species of penguin, after the emperor. Unlike emperor penguins, the kings cannot nest on ice.

"There are still some islands further south where king penguins may retreat, but the competition for breeding sites and food will be harsh, especially with other species like the chinstrap, gentoo or Adelie penguins, even without the fisheries," said Celine Le Bohec, one of the study's co-authors.

"It is difficult to predict the outcome, but there will surely be losses on the way — if we are to save anything, proactive and efficient conservation efforts but above all coordinated global action against global warming should start now," Le Bohec added.

The researchers say the plight of the king penguin should be a warning about the future of the Antarctic's entire marine environment if action isn't taken soon.

Scientists and environmental activists are pushing for the creation of a large marine protection area in the Antarctic. Originally proposed by Germany and now backed by the European Union, the 1.8 million-square-kilometer fishing-free zone, would ban all fishing and protect species, such as penguins, leopard seals and whales.

If successful, it would be the world's largest sanctuary by area.

The plan was rejected during the Commission for the Conservation of Antarctic Marine Living Resources' annual meeting in 2017. However, the plan will be brought up again for a vote at the organization's meeting this year, which takes place in October.

Penguins - the coolest birds to ever wear a tux

Have you heard about northern Germany's gay penguins? How about Sir Nils Olav? No? Then it's about time! Penguin Awareness Day on January 20 is the perfect occasion to learn more about the waddling birds. (20.01.2017)